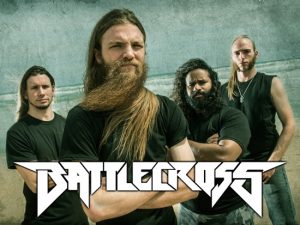 A sonic metal assault that leaves audiences pumped with adrenaline, Detroit’s Battlecross are one of the true champions of American Heavy Metal.  With elements of upbeat thrash, European, death, and southern metal, Battlecross brings back the old school thrash, heavy groove, harmonizing guitars, epic guitar solos, dynamic death-style vocals and impressive bass work that makes their blend a fast favorite with headbanging fans.
Ghettoblaster recently had the pleasure of catching up with guitarist Tony Asta to discuss pizza by the slice at Wine Depot, Ted Nugent, DTE, Beer Fest and all the other things that make living in South Warren Michigan not suck.  This is what he told us about his stomping grounds.
What’s your town’s nickname?
South Warren (Warren, Michigan)

What’s your nickname for your town?
Just plain old Warren, haha!
Why do you live there?
I moved in with my girlfriend (now wife) in 2010, because she grew up here all her life. Our house is a quarter mile from 8 Mile, which is the boarder between Detroit and Warren.
Did you grow up there? If not, what brought you there?
No, actually I grew up in Canton, Michigan. Some people think if you’re from Canton than you’re more “well off” but that’s just as much of a misconception is as people from Warren are hillbillies or ruthless thugs. Which neither aren’t true at all but I admit this area is a little more blue collar. I moved closer to Detroit to live with my wife and also because the band’s official practice space was in Warren at the time (in 2010). As of 2012 the band’s practice space is now in my basement, haha!

What’s the weirdest thing that has ever happened to you there?
One time a pizza guy got robbed at gun point and knocked on my front door for help. They stole his money and his phone. My wife let him in for shelter as he was pretty freaked out. The cops showed up and everything.