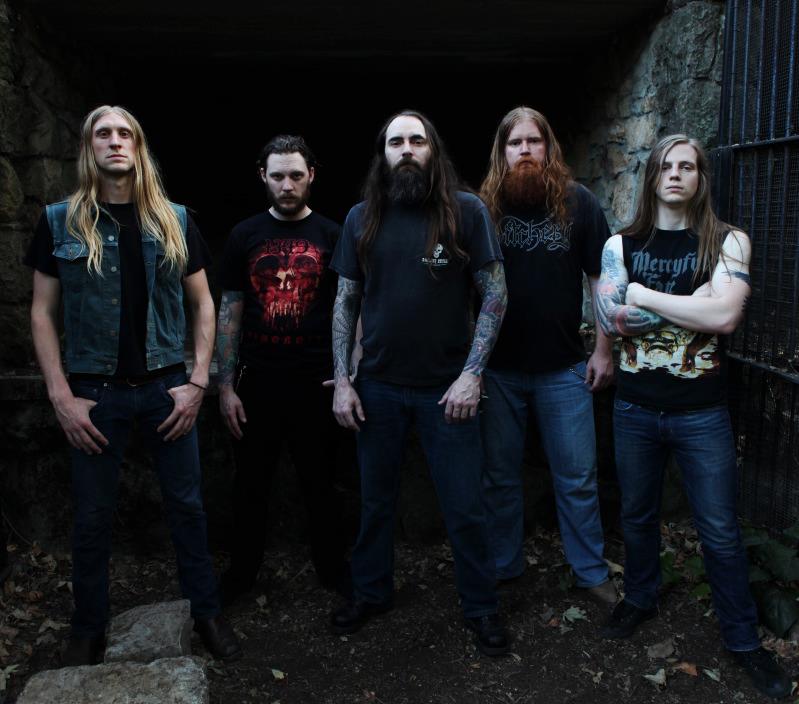 Southeast Ohio’s Skeletonwitch has been making huge waves in the modern metal scene for several years, garnering them a spot on such high profile tours as Ozzy Osbourne’s annual Ozzfest in 2010 and a support slot on Danzig’s The Blackest of the Black tour in 2008.  Their last several albums for Prosthetic Records show a band with roots that extend into all forms of metal, thrash, punk and rock and roll.
I met Scott Hedrick before he was the lead guitarist, when he was behind the counter at Haffa’s Records in Athens, OH, and have watched as he and the quintet emerge as true metal maestros. You Indie caught up with Hedrick as the band prepared for their U.S. Abomination Tour recently to discuss the highlights of his current stomping grounds in the foothills of Appalachia, near misses with molestation, Chris Beister, Athens County mugshots and more.  Here’s what he told us about Athens, Ohio…
What’s your town’s nickname?

Some people call it “Harvard on the Hocking.”
What’s your nickname for your town?

Athens is a college town so typically there is a lot going on (i.e. shows, community events, university speakers, BBQs, plenty of bars, etc..) But it’s also nestled at the foothills of Appalachia so there is a lot of natural beauty.  I typically spend 7 or 8 months of the year on tour.  So when I come home I have the opportunity to be as social as I want, or just hide out and go hiking canoeing.
Did you grow up there? If not, what brought you there?

I did not grow up in Athens.  I grew up in a tiny little town in northwest Ohio, called Delphos.  I came to Athens to attend Ohio University.
What’s the weirdest thing that has ever happened to you there?

The weirdest thing probably happened when I attended college orientation. My dorm mate and I snuck out of our room (it was against the rules to leave after a certain time) and went looking for something to do. We ended up running into an older employee for the school who remembered us from a seminar early in the day.  He was absolutely shit-faced.  So the next logical step was to ask him to buy us beer.
First he gave us an an impromptu, and probably illegal, late night tour of a university office.  He was barely coherent, gesturing wildly with his hand that was clutching an extremely messy burrito.  After covering most of the office in cheese, lettuce and sour cream, he bought some beer and we went back to his apartment.
Clearly this guy lived alone, as his apartment was a fucking disaster.  The only thing that seemed to receive any attention in his place was a pristine aquarium that was home to a giant python. Extremely creepy!!
After a couple of beers we decided it was time to go.  Both of us are giving each other the “let’s get the fuck out of here look” when he starts to proposition us.  Yes, sexually proposition us. It was non-threatening, as a stiff wind could’ve kicked this guys ass, but we made it clear that we needed to leave.  So he walks us outside and says that he has to take a piss.  Then he just stands there, fully clothed, and pisses himself.
Half buzzed, we successfully creeped back into our dorm undetected.  Welcome to Athens!!  (It should be noted that this guy was fired shortly thereafter for various misconduct.  What a shocker!)
What is your favorite local attraction (monument, park, etc)?
Probably the hiking trails around Stroud’s Run State Park.  Beautiful and peaceful.
What is your favorite local event or festival?

Due to our rigorous touring schedule, I miss most of the good ones, but Brew Week and Athens Community Music Festival are great.  Can’t go wrong with great local music, and a beer festival!
What is the best time of year to be there?

I prefer the times when the University is not in session and the town is quiet.  November to January is great.  It’s quite, there’s plenty of parking, and there’s a great small-town feel.  You realize how tiny Athens actually is when you don’t account for the university.
Who is your favorite local celebrity?

Chris Beister.  Fantastic singer and guitar player.  He’s been in many bands, most notably I suppose, was Appalachian Death Ride.  He’s a great guy, full of fantastic stories and always a pleasure to see around town. They should give him the key to the city! Haha!
Where is the best place to drink and what’s their specialty or happy hour?

That’s tough! I’m going to break the rules and choose 3:
The Union Bar is a classic “dive” bar that’s been around for years and has great shows. I would stop there for a cheap beer.  Then I would head to Tony’s, which has a slightly older non-student crowd, and I would finish up with a Bloody Mary at Casa Nueva
Who has the best jukebox (and what’s in it)?

The Union definitely has the best music.  They don’t have a jukebox, but they play a wide array of tunes.  I think it’s just a hardrive full of music set on shuffle.  Fortunately the shuffle function loves the Jesus Lizard and Bon Scott era AC/DC as much as I do.
Do you play music there? If so, where is your favorite place to play?

We do.  We always play at the Union.  It’s the best place to see a rock, metal, or punk show.
Does where you live influence your music?

Not really.  I think our music would be the same regardless of where we lived.  However, I do believe that the support of the music/arts community has played a big role in Skeletonwitch really getting out there and pursuing the band full time.  It always feels the like the town “has our back” so to speak, and encourages us to get out on tour and rep for the town.  It’s a great feeling.
What is your favorite place to see live music and what was your favorite show there?

Definitely the Union.  When I was in high school I came down to visit my older brother who was attending school in Athens.  We saw High on Fire on their first tour supporting “The Art of Self Defense.”   I’ll never forget it!
What is your favorite local band?

I don’t have a favorite, as we have a pretty active music scene.  The Dropdead Sons are great garage rock.  Wheels on Fire has excellent song-writing and is rock ‘n’ roll to the max.  Weird Science is catchy and at times reminds me of The Real Kids.  Hexnet is great.  Dead Winds of Summer is crazy ambient noise stuff and a solo project of my buddy Andrew at Haffa’s Records……Yeah…definitely too hard to pick an absolute favorite.
What is your favorite diner or restaurant and what is their best dish?

Casa Nueva is my favorite.  They term their food “quasi-mexican.”  Everything there is made fresh and they use almost exclusively local meat, vegetables, and ingredients.  In fact, the menu mentions the specific local suppliers.  So you could go meet your meat on a local farm Portlandia-style if you really wanted to.
What is your favorite record store and what was your best find there?

I’m a little biased here: There is only 1 independent record store, and I also work there when I’m home.  It’s called Haffa’s Records and has been around since the late 60s or early 70s.  One of my favorite finds isn’t particularly rare, but it’s the Love Peace and Poetry psychedelic music compilations.  When I discovered those I got on a huge psych kick. It definitely broadened my horizons further beyond rock, metal, hip-hop, and the usual stuff that a kid growing up in Ohio would listen to.
What is your favorite local publication (alternative weekly, zine, website or blog)?

My favorite website is the Athens County website where you can scan the mugshots of everyone that was thrown in the drunk tank over the weekend.
What is your favorite local shop?
United Lutherie.  Gene Imbody and Eric Coleman do custom guitar work and repair.  They built me an amazing Explorer-style guitar and have saved my ass countless times with cleaning and repairs.  I’d be screwed without those guys.
If you could live anywhere else, where would that be?