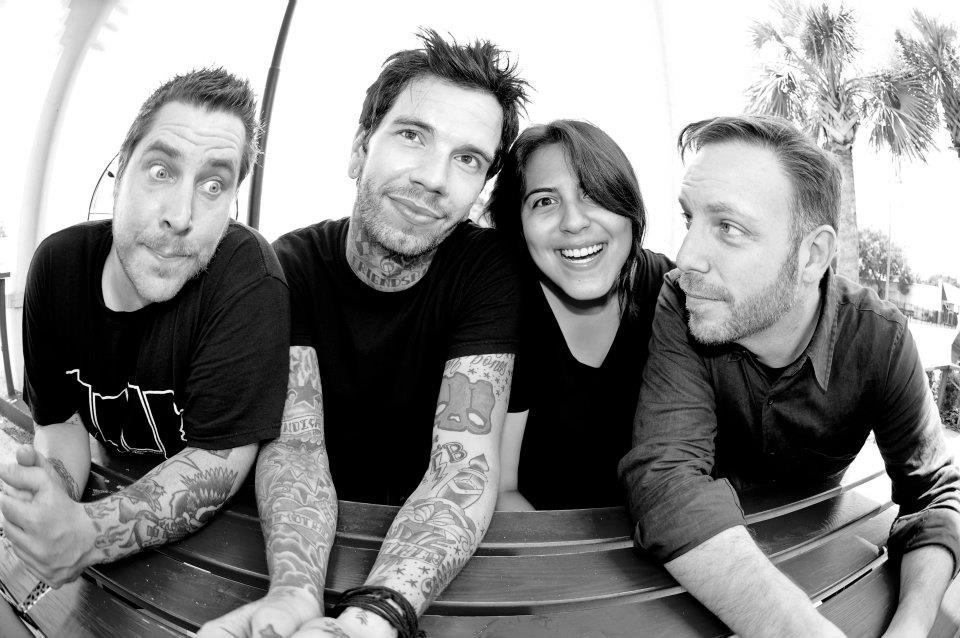 Earlier this year, Tampa’s New Bruises released, Chock Full of Misery, via No Idea and Kiss of Death.  The album is a surprisingly fun and nostalgic punk rock romp that reminds the listener what a band can accomplish just a few chords, some melody, and a catchy breakdown.  Not surprising, the gruff vocals, driving guitars and emotive delivery hinted at the band’s home state influences – Hot Water Music most noteably.  Ghettoblaster recently caught up with Kiss of Death Records/New Bruises’ vocalist/guitarist Bryon Lippincott (formerly of Mid Carson July), who received an assist from Jonny C of The Slow Death, to discuss all that Tampa has to offer, from pre-Fest activities to a local celebrity who dresses like Peter Pan.  Here are the deets…
1. What’s your town’s nickname?
Cigar City.
2. What’s your nickname for your town?
We call it Tampa, plain and simple.  But we call our neighborhood ‘Mattersville’ because all the ‘retired’ punks live there.
3. Why do you live there?
Tampa is a larger city with a few neighborhoods that have a small town feel.  We normally stick to an area of only a few miles and can find everything we want to do there.  It’s pretty bike friendly and it’s a great city to sit on a front porch and have various friends swing by all evening.  Plus if so desired, I have managed to keep myself out and entertained until 7 in the morning (the bars are open until 3am).
4. Did you grow up there? If not, what brought you there?
No, I grew up in Ithaca, NY and moved to Central PA, when I was younger. When the now infamous Y2K crisis came and fizzled out, we (Mid Carson July) decided to move to a warmer place.  We were going to move to Orlando and some friends, named Glenn and Arielle whom we had met on tour, convinced us to try out Tampa. They swayed us with an offer of rent free floor space and I never left, Tampa that is, I eventually  moved into my own house.
One of the first people I met in Tampa was Jonny C, who helped me answer these questions because I tend to get sidetracked.

5. What is the weirdest thing that has ever happened to you there?
Sarasota New College parties around the turn of the century.  Look it up. It was like Will Smith’s “Summertime” music video, but with artsy college kids… Totally amazing!
6. What is your favorite local attraction (monument, park, etc)?
Ybor City.  It’s an old neighborhood with loads of restaurants and bars.  Super fun for people watching.  There’s even shops where you can watch old Cuban men hand roll cigars. Plus there is an amazing club called the Castle there, which is even better people watching. It can get weird.
7. What is your favorite local event or festival?
Pre-Fest.  Even if it is just the precursor to The Fest in Gainesville, FL, it’s still the best day of the year to be in Tampa.  All of our friends from around the world descend on our town to play shows and prime their party engines for the weekend debauchery to follow.
For the less punk set, there is a little thing here called Gasparilla.  It is the celebration of a pirate invasion of the Tampa Bay.  A Pirate ship sails into bay and famous pirate Jose Gaspar demands a Key to the City from the Mayor.  It is followed by a Parade on Bayshore Blvd where people can drink in the streets.
8. What is the best time of year to be there?
Both the spring and fall are beautiful.  If you come here during the summer, you may have a miserable time unless you’re planning on spending it all at the beach.  Luckily it is bearable due to the invention of a little thing called central air conditioning.  Just don’t get a job doing roofs or digging ditches in the summer here. You will hate your life

9. Who is your favorite local celebrity?
There’s a guy who dresses up like Peter Pan and goes out to clubs.  He rules.  We should give a shout out to the Senator and Batman and his Batcycle also, who are also local staples in Tampa and deserve a mention.

10. Where is the best place to drink and what’s their specialty or happy hour?
If you plan on drinking to forget I have to recommend The Hub. They have the strongest pour in town, if not in all of Florida. It was best described by a girl I know as a place to go drink if you want to be left alone.  It is the only place in town where the people are so immersed in their drinks they do not even notice other people or the surroundings. It is where the alcoholics go to pass time until they die…
That being said, I typically go to The Bricks in Ybor City or Fly Bar in down town Tampa.

11. Who has the best jukebox (and what’s in it)?
Once again, The Hub.  It’s stocked with Husker Du, The Replacements, The Smiths, The Descendents, and loads of mix CDs with local bands.  There are a couple different clubs in town that play a lot of new wave, goth, and post-punk stuff.  I tend to go to those if I want to listen to music.  There’s even a DJ night called “Vexed” where they play all punk and hardcore.

12. Do you play music there? If so, where is your favorite place to play?
Coming from the Northeast I’ve always had a soft spot for basement/house shows. We have played most of the clubs in Tampa and St Pete that have punk/indie bands, but currently my favorite place to play in Tampa is the Hold Tight House (http://www.suburbanapologist.com/look-new-bruises-arms-aloft-awkward-age-hold-tight-house-5-7-12/).

13. Does where you live influence your music?
I’d say that the oppressive heat combined with the pervasive conservative atmosphere in Florida definitely contributes to the overall feel of the band.
14. What is your favorite place to see live music and what was your favorite show there?
Once again, I really like to support independent venues/houses.  Transitions Art Gallery (at The Skatepark of Tampa) is a fantastic all-ages space with lots of great shows.  My favorite show there was Leatherface.
15. What is your favorite local band?
There’s a newer band called Criminal Culture.  They’re young and their spirits have not been broken, yet.

16. What is your favorite diner or restaurant and what is their best dish?
Everyone loves the Taco Bus.  It’s our favorite place to take our out-of-town friends.  Their Raja con Queso is fantastic from what I understand.  I am vegetarian and the fact that they serve vegan steak strips, tofu, and tempeh as an option makes it absolutely amazing.

17. What is your favorite record store and what was your best find there?
Microgroove Records is our local neighborhood store and my best find was a Warren Zevon LP for 99 cents!

19. What is your favorite local shop?
Green Shift is a wonderful music instrument/comic store that’s been around since 1983.  It’s nice to have an alternative to the big guitar stores for all things musical.

20. If you could live anywhere else, where would that be?
I would like to try London, New York, or even Los Angeles.  Everyone of those cities has differences that make them exciting and attractive, but they are all so massive I may get lost in them. In turn
I have a feeling I am going to end up in Philadelphia, Portland, or Austin, if I ever leave Tampa.  They all feel a bit smaller and more endearing, I am fine with that.
Jonny suggested Ocean Beach, San Diego, California, which is awesome too.
(For more information on New Bruises, visit
http://www.facebook.com/newbruisesband.)