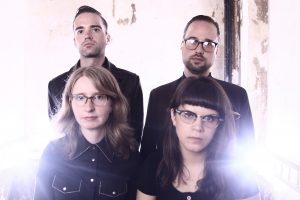 Co-ed psych rock/country collective The Space Merchants are clearly inspired by The Velvet Underground, Black Sabbath, Bobbie Gentry and Waylon Jennings. Although the description may be downright off-putting, their music isn’t. As the band describes it, they produce “country music for time travellers.” This is something we’d crank in the DeLorean. The band released their self-titled effort via Brooklyn label Aqualamb Records, who are known for releasing albums in the form of 100-page softbound books, on June 9.
Because the Brooklyn label affiliated Brooklyn band is so, um, Brooklyn centric, Ghettoblaster recently caught up with The Space Merchants’ Michael Guggino to discuss Brooklyn, as well as Breaking Amish, Macri Park, Beaner Bar, Di Fara Pizza, and White Hills. This is what he told us.
What’s your town’s nickname?
Broke-lyn or billy burg.
What’s your nickname for your town?

New Manhattan.
Why do you live there?
I live here because there is lots going on. I work in TV/film production and play music. Both keep me insanely busy.
Did you grow up there? If not, what brought you there?
I did not grow up here. I moved with my lady in 2006 to work in TV and film production.
What’s the weirdest thing that has ever happened to you there?
Weird things happen all the time. Last summer I worked on Season 3 of Breaking Amish, which was shot at a hostel in Bushwick. One of the cast members was a musician and they needed him to try out for a band. They shot a scene where this Amish country singer tried out for The Space Merchants. It was in an insanely hot practice space. We tried to teach him the song “Mainline the Sun,” which is pretty easy as far as songs go, but he was unfortunately devoid of all rhythm. We mostly made fun of him for the hour or so we were shooting. The scene was cut.
What is your favorite local attraction (monument, park, etc)?
I like Ft Green Park and also Most Holy Trinity Church on Montrose Ave. The church was built in 1841 and it’s supposed to be haunted by the ghost of the murdered bell ringer and sexton George Stelz. There is a blood stain on one of the pews and the bells are supposed to ring on their own.
What is your favorite local event or festival?
This is a hard question to answer. I moved here because of all the things to do.
What is the best time of year to be there?
Spring and Fall are the best times of year to be in Brooklyn.
Who is your favorite local celebrity?
There are lots of actual celebrities who live in Brooklyn that we see all the time. However there are lots of locals who are so ubiquitous that they rise to the level of local celebrity. One who I miss since his store became a tattoo parlor was Grande Monuments. This was a store that sold tombstones and fresh baked Italian bread. The owner would stand out front and pedal his self-published book “My Father, the Don” about his father who was in the mafia.
Where is the best place to drink and what’s their specialty or happy hour?
Brooklyn is full of amazing bars. It’s hard to pick. I would give a shout to our singer Ani who manages a bar called Macri Park. She runs a night called Drink and Draw where they have models pose and provide art supplies.
Also I like Daddy’s which is two blocks from my place. They have a drink called a Marga-veza. It’s a beer topped with frozen margarita and is perfect in the summer when it’s way too hot.
Who has the best jukebox (and what’s in it)?
Daddies has my favorite juke box because they have a lot of old ‘70s country and boogie rock. Plus the DJs they get are also very good. Jonathan Toubin, an excellent soul DJ, will sometime show up and do sets.
Where is your favorite place to play?
It’s hard to say which venue is our favorite since there are so many. One we love is called Union Pool. Always good sound and we play with great bands there. I would also say St Vitus in Greenpoint is another stand out venue.
Does where you live influence your music?
For sure. We are surrounded by excellent musicians of all kind. Whether I am jamming with my neighbors or talking about and listening to music at my local coffee shop, Beaner Bar, I am surrounded by sounds. When I first moved to my neighborhood there was a man named Najib Shaheen who owned a Kabob shop. He also happened to be a professional Oud player who would serenade you while you ate your kabob.
What is your favorite place to see live music and what was your favorite show there?
The same places we love to play are the same we love to see live music. Union Pool and St Vitus. One of my favorite shows there was this band Mountain High from Philadelphia. They were short lived but absolutely amazing and I was happy I got to see them at that venue.
What is your favorite local band?
That’s a tough one but there are two right now. We just played with our friends Weird Owl who are spectacular and the other is a band we haven’t played with called Sun Voyager. Honorable mention would be our buddies in White Hills. Their live performances are truly inspiring.
What is your favorite diner or restaurant and what is their best dish?
We are spoiled for food in Brooklyn. It’s famous for its pizza. Di Fara Pizza is one of those places you should eat before you die.
What is your favorite record store and what was your best find there?
I like Co Op 87. It’s tiny and they have lots of roots reggae ‘45s. Very off the beaten path.
What is your favorite local publication (alternative weekly, zine, website or blog)?
I like Square Zeros. It’s a local music blog. The guys who run it are really passionate about music and get very involved in the local scene. http://www.squarezeros.com/
What is your favorite local shop?
Southside Guitars
Main Drag music
If you could live anywhere else, where would that be?

Nashville. I spent a lot of time shooting a cooking show with Kimberly Schlapman from the group Little Big Town. It was just a great town for music, food, culture and fun people.
(Visit Space Merchants here: http://facebook.com/thespacemerchants.)