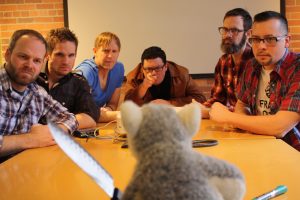 Instant Empire are set to release their third EP, Keep Up!  Inspired in part by T.S. Eliot, Keep Up!, imagines the voice of a younger (and slightly more intoxicated) J. Alfred Prufrock.  Thematically, the album tackles big topics such as our struggles with the passage of time and the search for clarity in the modern world.  Sonically, the effort is the band’s most aggressive to date and finds the band in league with contemporaries like The Hold Steady, The National, The Mountain Goats, Death Cab For Cutie and Desaparecidos.
Ghettoblaster recently caught up with drummer Matt Grizzell to find out what inspires the band in their Stomping Grounds of Denver, Colorado, including the high instances of consumption, John Elway and Rupp’s Drums.  This is what he said about their city…
What’s your town’s nickname?
They call Denver the “Mile High City,” but everyone knows that.  Perhaps more interesting is the nearby industrial enclave of Commerce City; its colloquial moniker is “Stinky Town.”
Why do you live there?
Each of my band members made a conscious decision to move to Denver.  The thin, dry air is good for those of us suffering from the consumption.  I made an unconscious decision to move here.  I was violently trafficked hence by a rabid fan of a previous band.  We are currently expecting our first child together.
What’s the weirdest thing that has ever happened to you there?
This one time, I realized self-actualization in Dairy Queen bathroom.  For one fleeting moment, I became fully human.
What is your favorite local attraction (monument, park, etc)???
The Colorado mountains are a recreational powder keg!  I really enjoy hiking and climbing together in warmer months.  In colder months, I typically hang out at Vomitland, a dilapidated amusement park.
What is your favorite local event or festival?
Denver has two fantastic summer events, each of which parade the fantastic breadth of local music talent (and each of which have banished Instant Empire for life):  They include the Westword Music Showcase (curated by the eponymous local rag), and the Denver Post’s UMS Underground Music Showcase.
What is the best time of year to be there???
For the love of god, any time other than blood-locust season.
Who is your favorite local celebrity???
Certainly John Elway!  Except for his politics, his restaurants, and his car dealerships, he’s the best.  Oh, and don’t let me forget that phony horse-grin he calls a smile.
Where is the best place to drink and what’s their specialty or happy hour? ??
We like to drink at the Hi-Dive on south Broadway.  They usually have great cheap beer specials  (like Lost Lake, PBR, fresh chum, or Hamm’s).
Do you play music there? If so, where is your favorite place to play?
I think we enjoy playing the Hi-Dive more so than most other local venues.  They get big, attentive crowds; they attract national-touring indie acts; and they haven’t banished us for alleged fatal rock performance incidents.
Who has the best jukebox (and what’s in it)???
There is an unfortunate dearth of jukeboxes in most tolerable local establishments.  If there were a good local jukebox, I’d imagine it to be stuffed to the gills with a mix of Motown and Matador hits.
Does where you live influence your music? ??
It does, in fact!  Our music is like the local atmosphere:  it is thin, it is dry, and it helps people with the consumption.
What is your favorite place to see live music and what was your favorite show there???
The Bluebird Theater on East Colfax is a favorite.  It is not much larger than a typical club, but they get great acts.  I saw Tortoise there for the first time circa 2004, and they blew my mind.  By “they” I mean Tortoise and PCP.
What is your favorite local band??
We have lots of great bands locally, but my two favorites are probably Gun Street Ghost and El Toro de la Muerte (from Colorado Springs).
What is your favorite diner or restaurant and what is their best dish???
My favorite restaurant is a breakfast establishment called Dozen’s; partly for the Belgian waffles and partly for the opportunity to talk about vintage drums with the owner John.
What is your favorite record store and what was your best find there???
WaxTrax is a local legend!  Best (almost) find: When I was in high school, someone walked in a few steps in front of me and proceeded to buy the only available copy of the obscure release I came to find (Mangravy by Fluf).  True story.
What is your favorite local publication (alternative weekly, zine, website or blog)???
Until a few months ago, the Onion AV Club had a local writing staff that had the most concise, insightful print and web content regarding local music.  The Westword is the other 500-pound gorilla for local music and food coverage.
What is your favorite local shop???
Rupp’s Drums.  They keep a  few vintage drums around, they exude less coke-fueled bravado than DrumCityGuitarland, and sling less cookie cutter suck-ness than Guitar Center.
If you could live anywhere else, where would that be??
London.  I hear that consumption is much less prevalent there as of late.
(Find out more about Instant Empire here: instantempireband.com.)