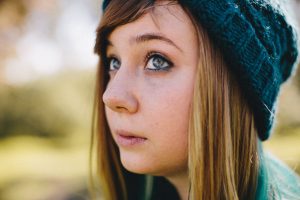 Growing up in rural Northern California, The Blues and Greys’ Lindsey Waldon was raised as the daughter of a working jazz singer. Waldon quickly followed in her steps. Her pursuit and passion of all things musical included ten years of classical piano, five years of trumpet, three years of bass lessons. By the time she was twelve, she discovered punk rock.  Evidence of Waldon’s diverse musical background is displayed on the title track of The Blues and Greys debut EP, which is propelled by Waldon’s full-bodied voice.
While acquiring a lifetime of musical skill in her short amount of years, The Blues And Greys marks the first time Waldon has fronted a full-band. The genesis of the group began when Waldon moved from Northern California to Santa Barbara to attend college. Waldon quickly became engrained in the local music scene where she was introduced to fellow musicians Thom Flowers and Jonathan Miller. Flowers and Miller had each spent considerable time playing and touring in various bands, and had recently teamed up to produce local artists. Joining forces to write material together, the trio recruited local musicians Austin Beede (ex-Alberta Cross) to play drums, and Michael Million to play bass.

Production duties for their forthcoming debut EP release, Bright Lights, were handled by Flowers himself and boasts mastering by the legendary Alan Douches at West West Side Mastering (Rogue Wave, Xiu Xiu, Japandroids). The Bright Lights EP drops October 15 on Wednesday Records (Mock Orange, Southside American). Following the record’s release, The Blues and Greys will spend much of the next year touring throughout North America.

Ghettoblaster recently had the opportunity to catch up with Waldon of The Blues And Greys to discuss her favorite aspects of her Stomping Grounds, Santa Barbara, CA.  This is what she said about Whiskey Richards, Christopher Lloyd, and pumpkin Portobello linguini, among other things.
What’s your town’s nickname?
The American Riviera.

What’s your nickname for your town?
The trap. Once you live here it’s hard to leave.
Why do you live there?
For my music and my friends, and because it is one of the most beautiful places in the world!
Did you grow up there? If not, what brought you there?
I did not grow up and my reasons for coming here were quite random. I didn’t know anything about Santa Barbara nor did I have any friends or family. Essentially I took a map, closed my eyes, and my finger landed on Santa Barbara.
What’s the weirdest thing that has ever happened to you there?
I had a homeless man follow me around yelling at me about being a bad daughter. That was pretty weird.
What is your favorite local attraction (monument, park, etc)?
The beach. It’s everywhere and it’s so beautiful and inspiring. I always go there whether to feel better, work out, or just have fun!
What is your favorite local event or festival?
New Noise Music festival is by far my favorite. I’ve been a part of it since the beginning and I’ve been lucky enough to play it a handful of times!
What is the best time of year to be there?
I personally don’t think it matters. Santa Barbara has the same climate most the year.
Who is your favorite local celebrity?
Christopher Lloyd, hands down. I once stood behind him in line for a smoothie, it was very exciting.
Where is the best place to drink and what’s their specialty or happy hour?
Whiskey Richards. They are known for their whiskey! They play live music at least four nights a week And have two nights where they play the best indie rock and punk rock jams out there.
Who has the best jukebox (and what’s in it)?
Again, Whiskey Richards! It literally has everything on it. Digital jukeboxes – the way of the future.
Do you play music there? If so, where is your favorite place to play?
I have played several shows at Whiskey Richards and I still participate in karaoke night and open mic. I always like to get out and play for people.  My favorite place to play in Santa Barbara though would have to be Muddy Waters. It’s a coffee shop by day and a wonderful live music experience by night!
Does where you live influence your music?
Absolutely. I would say a lot of our sound is influenced simply by the beautiful nature that surrounds us.
What is your favorite place to see live music and what was your favorite show there?
I love our venue/restaurant SoHo, because they have an amazing sound guy and a beautiful stage to play on. The best show I saw there was Devendra Banhart mainly because it was my first show there and I snuck in! Also, I watched Devendra’s manager and bandmates chase him around the parking lot 25 minutes, begging him to get in the van so they could leave. It was amazing.
What is your favorite local band?
I would say one of my favorites is Dante Elephante! I love their surf rock sound that also has a strokes and Dr. Dog vibe to it. Those are two of my favorite bands, so of course I love DE! They’re also really nice guys and I’ve actually had the pleasure of playing with them in the past.
What is your favorite diner or restaurant and what is their best dish?
I LOVE the Sojourner off of Canon Perdido. I have always been preferable to their vegetarian lasagna, but recently I had the most amazing dish there. It was the pumpkin portobello linguini, and it was the best thing I’ve ever eaten.
What is your favorite record store and what was your best find there?
Well I am only aware of one and it’s right on lower state street. My greatest find was a 99 cent Kenny Loggins record from the ‘80s.
What is your favorite local publication (alternative weekly, zine, website or blog)?
I love to read the Santa Barbara Independent. They have a wonderful section for the local arts which is extremely important to me.
What is your favorite local shop?
My favorite local shop would have to be Golden Eagle Tattoo. Five of seven of my tattoos are from there and they take excellent care of their customers! I recommend going to Johnny Woodruff!
If you could live anywhere else, where would that be?
I would live in Paris, France. I absolutely LOVE France.
(Visit the band here: http://www.thebluesandgreys.com.)