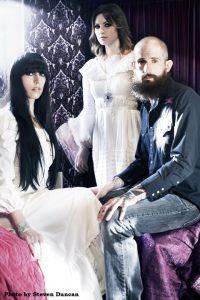 Los Angeles’ Ides of Gemini, a powerhouse doomgaze outfit featuring Black Math Horseman’s Sera Timms, axeman and bad ass metal journalist J. Bennett and drummer Kelly Johnston,  create metal that is somehow both completely crushing and breath-takingly spacious.  The group’s dark and adventurous debut, Constantinople, dropped on May 29 via Neurosis’ Neurot imprint, and the band have been gaining momentum while touring in support of an album that elevates the dark aural arts ever since.

Ghettoblaster recently caught up with J. Bennett to discuss life in Los Angeles, getting rear-ended by Russell Brand, carne asada burritos, and the Fleetwood Mac bummer…
What’s your town’s nickname?
TinselTown
What’s your nickname for your town?
Wally World
Why do you live there?
I ask myself this question everyday. Then I remember the astronomically high heating bills I used to get every month when I lived in Boston. I also enjoy Los Angeles’ two most popular tourist attractions: traffic and “acting.”

Did you grow up there? If not, what brought you there?
No. I grew up in Massachusetts, which makes me a Masshole. What brought me here? When you grow up in three feet of snow, Los Angeles looks like the Promised Land.
What’s the weirdest thing that has ever happened to you there?
I got rear-ended by Russell Brand on Sunset Boulevard. In my car, I mean. We were both in our own cars. He hit me. I am not kidding. He was barefoot and very apologetic.
What is your favorite local attraction (monument, park, etc)?
Elysian Park and the nearby Los Angeles Police Revolver & Athletic Club Café, where you can enjoy a piping-hot plate of blueberry French toast with some of the LAPD’s finest—and their impressive chin collections.
What is your favorite local event or festival?
Chinese New Year. Mayor Villaraigosa drives a German panzer down Broadway in Chinatown and attempts to steamroll the locals in a frighteningly lifelike reenactment of the Tiananmen Square riots. The only difference is that everyone, including the mayor, is completely shitfaced. But mark my words: this year is gonna be the year when the locals exact their revenge.  Just wait and see.
What is the best time of year to be there?
4:44pm on April 26th.
Who is your favorite local celebrity?
Juan Perez, my attorney/business manager.
Where is the best place to drink and what’s their specialty or happy hour?
Footsie’s on Tuesday nights for Heavy Tuesday, the all-vinyl hard rock & heavy metal night featuring grindcore legend Scott Carlson (Repulsion), über-cartoonist Tom Neely (Henry & Glenn Forever) and myself on the wheels of steel.
Who has the best jukebox (and what’s in it)?
Footsie’s has a good one – they’ve got Roky Erickson, Black Sabbath and Foreigner up in that piece.  And I think the bar at Malo has one of those digital ones where you can pull up like ten different versions of Whitesnake’s “Here I Go Again.”
Do you play music there? If so, where is your favorite place to play?
I’m gonna say the Wiltern or the Henry Fonda Theater. We haven’t actually played either of those places yet, but I’m trying to manifest.
Does where you live influence your music?
Absolutely. If we lived somewhere cold and shitty, we wouldn’t get nearly as much done because I would be spending too much time complaining about how cold and shitty it is.
What is your favorite place to see live music and what was your favorite show there?
The 6th Street Warehouse, RIP. Saw the Melvins play on a skate ramp there maybe six or seven years ago. They did their cover of Alice Cooper’s “Ballad Of Dwight Frye,” which I’d never seen them do before and haven’t seen them do since. I might have even shed a tear.
What is your favorite local band?
That would be a three-way tie between Vum, The Nocturnes and Harassor. I also have to give a shout out to Holy Grail, even though they’ve kind of transcended the dubious “local band” genre at this point.
What is your favorite diner or restaurant and what is their best dish?
The carne asada burritos and cheeseburgers at Yuca’s on Hillhurst are tits. The slow-roasted pork baguette with garlic fries at the Good Girl Dinette in Highland Park is top notch. You also can’t go wrong with the half-and-half Vietnamese lunch special at Xoia in Echo Park.
What is your favorite record store and what was your best find there?
Vacation Vinyl. I scored a live Death In June cassette and a sealed Tangerine Dream Stratosfear cassette on the same day. I’d also be an asshole if I didn’t mention Amoeba Records. It’s fucking huge, and I’ve been shopping there for 10 years now. Too many scores to mention, but the last time I went there I was beyond psyched to find Phil Lynott’s The Philip Lynott Album on vinyl. It was a used copy in a plastic sleeve that they had sealed up with tape so the local shitheads couldn’t pinch the vinyl and stick it in a sleeve from the dollar bin. I got it home, opened it, and found a fucking Fleetwood Mac record inside. And not even one of the good ones.
What is your favorite local publication (alternative weekly, zine, website or blog)?
Print-wise, the L.A. Weekly and the L.A. Record.  Blog-wise, Cvlt Nation and the Boulevard Sentinel, which is good for keeping track of which pot clinics and convalescent homes have been raided by federal agents and which alleys rack up the highest number of charred corpses.
What is your favorite local shop?
The Echo Park Time Travel Mart, where you can stock up on powdered horse milk and robot wigs. And Stories book store right up the street.
If you could live anywhere else, where would that be?
Constantinople, obviously.