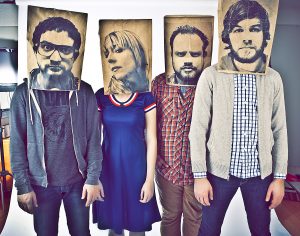 Detroit quartet FAWN (members of the Von Bondies, Thunderbirds Are Now!, Child Bite, Javelins and more) released their debut LP, Coastlines, on June 12 via Quite Scientific Records.  The record showcases the sounds of New Detroit through the prisms of such 90s touchstones as Jesus and Mary Chain, The Pixies, Sleater-Kinney, The Breeders, and Juliana Hatfield, alongside modern influences like Yuck or The New Pornographers.
Not only are the band talented musicians, but design their own record covers, photography, posters, websites, and video treatments. Recently FAWN released a brand new video for “No Wave,” the second single off of Coastlines .  Directed by band members Christian Doble and Alicia Gbur, “the concept of the video/song is based on the feeling of living your life under water. The end half of the song represents breaking free from this solitude or melancholy”  Check out the video at Noisey.com, the music channel from the makers of VICE.
Ghettoblaster caught up with FAWN Mike Spence the week of Coastlines’ release to ask him some questions about the Dirty D.  This is what he told us…
What’s your town’s nickname?
The Paris of the Midwest.
What’s your nickname for your town?
We usually quote lyrics from MJ’s “Thriller” when people ask us about Detroit. But a nickname? Hmm…People call it ”The Dirty D.” That sounds about right. It’s grimy and laws here are mostly just like recommendations.
Why do you live there?
I lived in a nearby suburb for the first couple years after I moved down here. It was a real snooze-fest filled with rich old hornets. I moved into the City because, for all its hang-ups – and there are many – it feels more youthful.
Did you grow up there? If not, what brought you there?
No. Alicia Gber and Matt Rickle grew up in or around the City. Christian Doble grew up further out. I grew up in the country. If we were talking in-person, I’d point to my hand and show you where.
What’s the weirdest thing that has ever happened to you there?
My bus stop is near a county jail. One time, I was talking to this guy in his seventies about random stuff. He was very grandfatherly. Turns out, he had just been released after a 30-year sentence. He asked me if I knew where he could get the best sandwich in Detroit.
What is your favorite local attraction (monument, park, etc)?
The Belle Isle Conservatory is pretty rad, but idiots are always carving their initials in the succulents.
What is your favorite local event or festival?
Dally in the Alley is good for people watching and buying stuff made of dyed hemp. Funny how those things go together.
What is the best time of year to be there?
Anytime but winter.
Who is your favorite local celebrity?
Are there celebrities from Detroit?
Where is the best place to drink and what’s their specialty or happy hour?
The Sugar House in Corktown knows how to concoct. They make a Good Old Fashioned with maple bourbon, and a weird cucumber fizz with egg white meringue. But that’s a little bourgeois. $1 Black Labels at Sneakers in Ferndale are probably a better bet.
Who has the best jukebox (and what’s in it)?
The Bronx.  They have all these mix CDs, and in the place of album artwork, they just have Jiffy Cornmeal Muffin Mix boxes with the playlist written on them. Mix. Get it?
Do you play music there? If so, where is your favorite place to play?
Yes. Depends on who we’re playing with.
Does where you live influence your music?
How couldn’t it? I mean, probably. We’re all pretty aware of our surroundings.
What is your favorite place to see live music and what was your favorite show there?
Radiohead touring on Amnesiac with Beta Band at Blossom Music Center (Cleveland, OH). Not Detroit, but it was a hell of a show.
What is your favorite local band?
Zoos of Berlin.
What is your favorite diner or restaurant and what is their best dish?
Mudgies Deli. The meatloaf sandwich is called “Bat Outta Hell.” That’s clever.
What is your favorite record store and what was your best find there?
Hello Records in Corktown. Two copies of “Yellow Magic Orchestra” – both on yellow wax.
What is your favorite local publication (alternative weekly, zine, website or blog)?
Jack Lessenberry’s column in Metro Times is insightful.
What is your favorite local shop?
Emily and Andy Linn do a really nice job with both of their shops in Midtown, and they could be the friendliest shop owners I’ve ever met. I especially like Nest. They sell some gorgeous terrariums.
If you could live anywhere else, where would that be?
In the Upper Peninsula. On Lake Superior.
(For more info, please visit:
http://wearefawn.com
http://facebook.com/wearefawn
Tweets by wearefawn