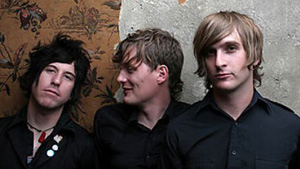 Denver, CO’s The Swayback released their new album Double Four-Time in March 2012.  The album boasted production from two legendary figures including Andy Johns who produced all of Led Zeppelin’s albums (after 1), The Rolling Stones Exile On Main Street and Television’s Marquee Moon. Jason Livermore tackled some of the tracks at Bill Stevenson’s (Black Flag) legendary Blasting Room Studios in Colorado and has had a hand in some of the definitive punk albums of the last decade including bands like Rise Against, The Gaslight Anthem and Hot Water Music.  The shift in production reflect the diversity of the band’s sound, which The Onion summed best by saying “Rock music is a lot like a cup of coffee: Some like it as strong as The Stooges, or dark like Joy Division. The Swayback takes it both ways-usually at the same time.”
Ghettoblaster recently caught up with bassist/vocalist Eric Halborg to ask him some questions about his current Stomping Grounds and the freedom it gives The Swayback to be whatever the fuck they want to be.  Turns out he also loves the clothing optional hot springs near Steamboat too!  Here’s what else he told us…
What’s your town’s nickname?
Mile-High City or Queen City of the Plains.
What’s your nickname for your town?
Dnvr.
Why do you live there?
There’s space. It’s gorgeous; the people are cool and there are Tolkien-esque mountains 30 miles from my front door. Denver’s not huge, but there’s enough action that you can always find some trouble if you need some. And then you can easily duck into the woods and hills if you need to drop out.
Did you grow up there? If not, what brought you there?
I moved from Chicago to Colorado two weeks after I graduated high school. Western wanderlust brought me here.
What’s the weirdest thing that has ever happened to you there?
It probably involves the telepathic messages I thought I was receiving from the wind in the mountains above Boulder this one time.
What is your favorite local attraction (monument, park, etc)?
Strawberry Hot Springs in Steamboat.  Pool after pool of natural hot spings in the middle of an aspen grove two miles past cell coverage. Clothing optional after 10 pm.
What is your favorite local event or festival?
The Denver Post Underground Music Showcase. It’s four days of bands all over South Broadway in Denver playing everywhere from the indie club Hi-Dive to the gothic church across the street from it. Local Denver rulers like Pictureplane, Nathaniel Ratelif, Gauntlet Hair, and Bad Weather California alongside non-Denver bands like Places to Burry Strangers, Black Moth Super Rainbow, and Atlas Sound.
What is the best time of year to be there?
Summer for gardening. Winter for sliding down the mountains.
Who is your favorite local celebrity?
Slim Cessna & Munly.
Where is the best place to drink and what’s their specialty or happy hour?
I’d say Lost Lake or Sputnik and I’d guess Olympia cans are on permanent $1 happy hour at both places.
Who has the best jukebox (and what’s in it)?
Sun Down Saloon in Boulder which is north of Denver. Their jukebox has stuff like the Melvins, Bowie, Stones, Stone Roses, Slayer, Mclusky, Joy Division, Love & Rockets, Smiths, Misfits, Kurt Vile… the good stuff.
Do you play music there? If so, where is your favorite place to play?
Hi-Dive in Denver and The Fox Theater in Boulder. Both have great sound.
Does where you live influence your music?
Maybe in that we get left alone to hash out how we sound. There’s space and encouragement to be whatever the fuck you want and I guess Denver has given us the stages, space, and time to naturally evolve into something singular.
What is your favorite place to see live music and what was your favorite show there?
Red Rocks is my favorite place to see a show. The stage is a naturally occurring stone amphitheater in the foothills looking out over the eastern plains and Denver. You can see lightning storms from a hundred miles away and the sound bounces off huge stone monoliths.  I saw Willie Nelson there once and it was pretty damn awesome. I saw Leonard Cohen, Bob Dylan, Bauhaus, NIN, My Morning Jacket, Band of Horses, The Dead, and Allman Brothers’ Band there and those were all great too.
What is your favorite local band?
Gantlet Hair, Nathaniel Ratelif, and Bad Weather California….and Slim Cessna’s Auto Club.
What is your favorite diner or restaurant and what is their best dish?
Zorba’s on 12th Ave. in Denver.  I like their Loukaniko ( Greek Sausage).
What is your favorite record store and what was your best find there?
Twist & Shout Records. I got a live recording of a Lenny Bruce performance on vinyl that was really good from there.
What is your favorite local publication (alternative weekly, zine, website or blog)?
Westword. They have Noah Van Sciver comics every week that are hilarious.
What is your favorite local shop?
Ironwood. It’s has old typewriters, medical tools and vintage anatomy posters, terrariums, cactus and these crystal and gunshell necklaces. It’s just cool and weird and you’d have to go in to get the full spectrum of its’ awesomeness: http://ironwoodcollection.com/.
If you could live anywhere else, where would that be?
Nosara, Costa Ricca in Turbonegro’s surf shack.