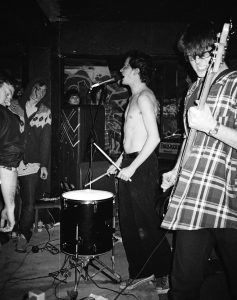 In March, Load Records released Ed Schrader’s Music Beat’s Jazz Mind, a wild and chaotic post-punk offering that recalls Swans and Joy Division, showing former Wham City member Ed Schrader’s fruitful collaboration with bassist Devlin Rice.  Though the Baltimore-based duo is packing for an East Coast trek with Future Islands later this month, Ed Schrader took some time to answer our questions about his stomping grounds.  Here’s what he had to say about Baltimore:
1. What’s your town’s nickname?
Charm City
2. What’s your nickname for your town?
Baltimore, I honestly just call it that.
3. Why do you live there?
I visited in 2006 and fell in love. There were 10 people at a dance party way dorkier than me and they were unabashedly cutting loose and just being themselves without the cold restraint that I found in the hard core and indie rock scene, this was Wham City!
4. Did you grow up there? If not, what brought you there?
No, essentially the cheap rent and wonderful music scene filled with folks who actually wanted to see you get ahead were what brought me. Wham City was the key stone in that though, I wanted so bad to be in Wham City, I thought these guys have really tapped into something, and their energy and enthusiasm was infectious, it is a family that I am honored to be part of, they saved my life!
5. What’s the weirdest thing that has ever happened to you there?
A man once yelled “hey!!” I responded “What?” and he said “You want your dick sucked.” I said “no thanks” then he said exasperated “for free!!?” I repeated “no thanks, I’m flattered but no thanks” to which he replied angrily “FUCK YOU!!!” I ran home, it was raining.
6. What is your favorite local attraction (monument, park, etc)?
I really love Camden Yards, it is truly one of the most beautiful baseball fields in America, and for $8 you can pretend to go to the picnic area and then actually sneak into the $150 box seats, and security doesn’t care. Seriously do it!
7. What is your favorite local event or festival?
Whartscape baby!
8. What is the best time of year to be there?
I’ll tell ya The Spring is fricken gorgeous here, lots of those pink flower trees, and Mount Vernon with her miniature parks and beautiful cobble stone roads along the Washington Statue is about as good as it gets!
9. Who is your favorite local celebrity?
The folks at Boone Street Farms, Brian Eliza, and my girlfriend Cheryl.  With little to no budget they set up a flourishing community garden working hands on with the kids and folks in the area to put together something really special that has had a very positive impact in an area void of healthy food options (i.e. food desert).  It is really amazing to watch people do something that monumental in a completely anonymous way/opposite of me (a big show boat ha ha). That to me is a real local celebrity.
10. Where is the best place to drink and what’s their specialty or happy hour?
Java Moon Cafe, in Penn Station, between 5 and 8 there are $1.50 Millers, and $1 mini Pizzas.
11. Who has the best jukebox (and what’s in it)?
I’d say The Club Charles by far, between The Clash, Wire, Future Islands, Dan Deacon, Patsy Cline, and The Santa Dads, you can hear it all!
12. Do you play music there? If so, where is your favorite place to play?
No, hands down Floristree!
13. Does where you live influence your music?
My room influences me to drink my town influences me to rage against the dying of the light!
14. What is your favorite place to see live music and what was your favorite show there?
Floristree, when I saw Doomsday Student , it was EPIC.
15. What is your favorite local band?
The Ram Ones
16. What is your favorite diner or restaurant and what is their best dish?
Mount Vernon Stable: The Twiced Baked Potato!
17. What is your favorite record store and what was your best find there?
The True Vine : REM’s first EP Chronic Town.
18. What is your favorite local publication (alternative weekly, zine, website or blog)?
The City Paper, well since I stopped writing for them it’s gotten so much better, all joke on the side after touring the country and reading many alt weeklies, I honestly have to say we got a real gem here. Bret McCabe is one of my favorite writers, and I had the pleasure of working with him when I did book and music reviews (don’t laugh), though he does not work there any more he really established  a level of integrity and quality that is unsurpassed by any other alt weekly in America .  The political reporting is also in depth and pretty damn edgy for a little scrappy weekly , seriously give it a gander.
19. What is your favorite local shop?|
Calvin’s baby!   It’s across the street from my house! Bacon, beer and batteries.
20. If you could live anywhere else, where would that be?
The apartment building in Brooklyn New York that has (no joke) DJ Dog Dick for a super! How rad is that?  He’s also an electrician! And rumor has it he sports an orange jump suit when he collects the rent! Pumped to hear his new album!