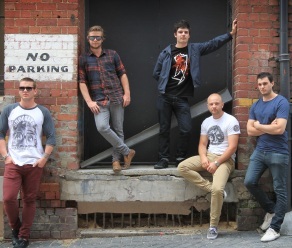 West Australian quintet TV Snow released their U.S. debut on December 1.  Given a title that pays homage to bass player Ben Linden, who was fatally attacked by a shark while surfing just a day after the record wrapped, Red is a collection of new material and re-recorded re-mixed versions of songs from their debut EP.  The commonality that runs throughout the material is an affinity for catchy hooks and a deep understanding of ‘90s alt rock.
Ghettoblaster recently caught up with TV Snow’s Derek Wardrobe to discuss his favorite things about his home, Perth, Australia.  This is what he had to say about it…
What’s your town’s nickname?
Perth doesn’t really have one…. Gets called “A big country town” a lot as there is only 1.5 million here… But I’m pretty sure Perth is just Perth. I’m making one up now. We need one!!
What’s your nickname for your town?
I call it “the land of the WA” (pronounced WAHHHHHHHH).
Why do you live there?
All about lifestyle!! Perfect pace of life… Best beaches, great pubs!! Not much more I ask for.
Did you grow up there? If not, what brought you there?
I’m originally from Melbourne, moved to Perth about 5 years ago for a change, and I have never looked back. I absolutely call Perth home now.
What’s the weirdest thing that has ever happened to you there?

A place called “Kings Park” would probably be the best. It’s where any local would take an out of towner to show them Perth. Big park looking over the city and river. From the top, your view is about 180 degrees and pretty impressive. Other than that, Stacey from down the road!!
What is your favorite local event or festival?
I’m a big fan of Big Day Out. This festival travels to every major city in Australia and get some pretty big international acts. Always a solid day of festivities!!
What is the best time of year to be there?
Definitely summer!! Perth is practical all about the sun, beaches and pubs. Summer is the perfect time to hit all three in one.
Who is your favorite local celebrity?
I would have to say the late Heath Ledger!! Phenomenal actor.
Where is the best place to drink and what’s their specialty or happy hour?
Loads of good places in Perth, so many pubs looking over the beach and coastline. You would be hard pressed to find a better place to drink in Australia!!
Who has the best jukebox (and what’s in it)?
The best jukebox I found was at a little country pub about 3 hours south of Perth in a place called Margaret River. It was still so old school and played CD’s. Everywhere is digital these days. I think Cold Chisel was getting a workout that night.
Do you play music there? If so, where is your favorite place to play?
Still yet to get out in the country of Western Australia. We all love playing where ever we have good sound and a good crowd.
Does where you live influence your music?
Absolutely does!! Summery coastal vibes run through all our veins.
What is your favorite place to see live music and what was your favorite show there?
Not long ago, I saw The Dandy Warhols and the Silversun Pickups at the Fremantle Arts Centre. It’s an outdoor venue next to this very old gothic style building. Very cool atmosphere.
What is your favorite local band?
At the moment, I would say Tame Impala. Their latest album Lonerism is up there in my top 5 Album’s for the year for sure. And these guys are doing awesome things on the world stage too.
What is your favorite diner or restaurant and what is their best dish?
I love eating at small, underground restaurants. There is a small Japanese restaurant in the city which you have to enter via an alleyway then walk down two flights of stairs to get to. Cheap and so delish! Can’t remember what its call but I could take you there!!!
What is your favorite record store and what was your best find there?
Place in the city called FATSHAN RECORDS. Massive range of old vinyl’s. Found a really old school reggae vinyl there for like 5 bucks… it was a win!!
What is your favorite local publication (alternative weekly, zine, website or blog)?
Always pick up the local music newspaper/magazine thingy called “Xpress Magazine” and another called “Drum Media”. Big fan of trying to keep up on my local knowledge of what’s happening around town, who’s coming to town and who’s leaving!!
What is your favorite local shop?
Roj Kebabs, the best Kebabs going around. I go out of my way to get these… Chicken sweet chilli and sour cream… Starts me!!
If you could live anywhere else, where would that be?
Still got a lot of places to check off my “to do” list, but maybe somewhere the total opposite of Perth… like Tokyo or New York. Perth is a sleepy place, be cool to live in a place that just doesn’t stop!! Total other end of the spectrum
(For more information on TV Snow, visit http://tvsnow.net/.)