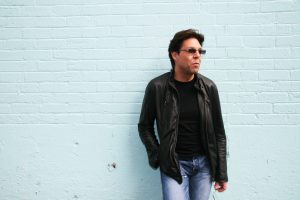 Kasim Sulton has a storied career that most musicians would kill for — after playing bass in Todd Rundgren’s Utopia in the 70s and 80s, Kasim went on to be Rundgren’s go to guy, playing bass for Meatloaf’s Bat Out Of Hell and being part of Rundgren fronted The New Cars. Kasim also has a handful of solo albums, the most recent being All Sides released in 2007. He’s currently also has a DVD of a live Atlanta show from 2008 and a download of a live show in Akron from earlier this year. He recently took the time to tell Ghettoblaster about Staten Island, and why Halloween is best at the Cargo Cafe.

What’s your town’s nickname?
The Cork In The Bay.
What’s your nickname for your town?
Stuckin Island.
Why do you live there?
It seems I’m glued to this place for some reason. It could be it’s proximity to Manhattan (35 minutes to midtown by car) it could be that I’m just to lazy to pack up and move. I’m not sure.
What is your favorite local attraction (monument, park, etc)?
The Boardwalk at South Beach. Just refurbished and a wonderful place to stroll and contemplate life.
What is your favorite local event/festival?
Halloween Night at the Cargo Cafe on Bay Street. It always attracts the most weird and creative crowd. The costumes are done well and there’s usually at least one girl fight. That keeps me coming back.
What is the best time of year to be there?
Mid September to the end of November. Lot’s of trees changing colors. After that it gets a little brutal temperature wise.
Who is your favorite local celebrity/personality?
Ralph Waldo Emerson. Arguably the most influential American author of the nineteenth century. His works include Self Reliance and Nature. As a transcendentalist he spoke out against slavery, formal religion, and materialism. Spent a good deal of time on the Island visiting his brother, Richmond County Judge William Emerson, who lived on the Island from 1837 to 1864. The Staten Island neighborhood of Emerson Hill was named for William Emerson.
Who has the best jukebox (and what’s in it)?
The Cargo Cafe. An eclectic mix of 60’s, 70’s and 80’s music. I know every song that’s played and that makes it fun to be there.
What is your favorite place to see live music and what was your
favorite show there?
Used to be a place called Dock Of The Bay. A small club in the basement of a prewar structure. We would go there every week to jam and every musician on Staten island has played there once or twice. More recently, they have refurbished an old theater, The St. George. A beautiful place that hosts national acts. I performed there in the 80’s with my band Utopia. That was my favorite show.
What is your favorite local band?
Fat Hellen And The Chickens.
What is your favorite diner or restaurant and what is their best
dish?
Gennaro’s Pizzaria. Need I say more?
What is your favorite record store and what was your best find
there?
Sadly, there are no record stores anymore. When there was, I used to go to one on Port Richmond Avenue. They would always stock foreign imports and stuff you couldn’t find anywhere else in the city.
What is your favorite local shop?
Grant City Antiques.
What is your favorite local publication (alternative weekly, zine,
website or blog)?
The local Marketeer!