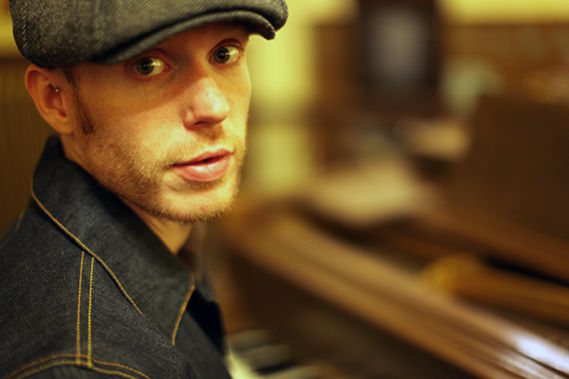 In Portland, Oregon, when it rains, it pours.  However, the weather is no big deal for rocker Kasey Anderson; it gives him a reason to stay in and work on his music.  Below, Kasey shares some of his hometown highlights, including the Burnside Bridge, a funeral home-turned-music venue and a pimp named “Diamonds.”
What’s your town’s nickname?
Besides the “Rose City?” I think I heard people call it “P-Town,” but I hate that. Let’s not recognize that.
What’s your nickname for your town?
I’ll occasionally call it PDX which is asinine since I don’t refer to other towns by their airport codes.
Why do you live there?
It’s the only place I’ve ever felt at home. I’ve lived all around the world and I’ve never felt this comfortable anywhere else. I was born and raised here, so there’s probably something ingrained in me that makes me believe it’s perfectly acceptable to live in a place where it rains more than half the year.
Did you grow up there? If not, what brought you there?
Yeah, I did. I spent some of what I guess you’d call my formative years in Bellingham, Washington, but Portland’s home.
What’s the weirdest thing that has ever happened to you there?
I spent New Year’s Eve 1999 in the back of an SUV with a man who went by the name “Diamonds,” and claimed to be “Portland’s most accomplished pimp.” I don’t know how we wound up in that car, and I don’t remember much else about the night, but I remember “Diamonds.”
What is your favorite local attraction (monument, park, etc)?
It’s not really an attraction, but if you stand at a certain point on the Burnside Bridge and look north, that’s the way Portland looks to me whenever I’m away and I think about home.
What is your favorite local event or festival?
Pickathon out at Pendarvis Farm. It’s my favorite music festival in the country to play, and my favorite to watch.
What is the best time of year to be there?

My favorite time to be anywhere is fall. I’m not prone to reminiscence, but fall seems to bring about these really melancholy pangs of remembrance in me, and I’ve never been one to shove that back down when it comes up. I don’t wallow, but I think people oughta embrace that sadness sometimes and ride it out.
Who is your favorite local celebrity?
There was this guy, Ramblin’ Rod, who had a kids show on every morning for a long time around here. He had this sweater that was just covered with pins and buttons of all kinds; every show, some kid gave him a dozen new buttons. From what I recall, all he really did was introduce cartoons and play the occasional game with kids but, man, he was magical to me growing up.
Where is the best place to drink and what’s their specialty or happy hour?
Pabst seems to be the drink of choice no matter where I go around here anymore, which is odd because I assume it tastes the same as it did when I used to drink it: like tepid piss.
Who has the best jukebox (and what’s in it)?
There’s a place called Lucky’s that has a great jukebox – old James Brown records, Meters stuff, Stax and Motown – and if you’re lucky, you’ll be there on a night when Willie Butler takes over the jukebox. He’s tuned in to that thing, man; he makes it his own, and he’s real theatrical about it. You can’t help but get into it.
Do you play music there? If so, where is your favorite place to play?
Mississippi Studios and Doug Fir are both great-sounding rooms. There’s this place called The Woods, which is a converted funeral home—that’s one of my favorite places in town to play.
Does where you live influence your music?
It can. The weather gives me an excuse to stay in and write when people in other parts of the country are out enjoying spring, which I’m told is a very beautiful season in certain places. Here in Portland, we just get slightly warmer rain than we had in January and February.
What is your favorite place to see live music and what was your favorite show there?

There used to be this club called La Luna; it’s not around anymore and hasn’t been for a while. La Luna was one of a handful of all-ages clubs in Portland at that time. I don’t think any of those clubs are left. I saw The Wallflowers there in 1996, I think, just as that record – Bringing Down the Horse – was about to break. I remember loving that show. Saw Quasi there, Mudhoney, Guttermouth, Pete Droge. I ran into Mark Arm in the crowd before Mudhoney went on – I think I was 14 or 15 – and I looked up at him and just started freaking out. “Oh man! I love every fucking thing you’ve ever done! I love you!” I thought he was gonna have security haul me off. I’d probably do the exact same thing if I ran into him today.
What is your favorite local band?
Black Prairie and Blue Giant both put out great records in 2010.
What is your favorite diner or restaurant and what is their best dish?
It’s not the best dish in Portland, but the Ham and Cheddar Mac at the Montage has served me well since I was 14-years-old.
What is your favorite record store and what was your best find there?
Music Millennium. When I was in high school, I’d leave my last class everyday and go directly to Music Millennium, buy records, and then walk down the block to Escape From New York Pizza and get a slice. I was still discovering music at that point so my “finds” weren’t Beefheart first pressings or anything like that, but they were records I wound up loving and still love. Monk’s Underground, Some Girls, MC5 records, the Pogues—stuff like that.
What is your favorite local publication (alternative weekly, zine, website or blog)?
I think Ryan White of The Oregonian is a great music writer, not just for Portland, but anywhere. People should really seek out his writing, whether they live in Portland or not.
What is your favorite local shop?
There’s a deli called Kenny and Zuke’s that has its hooks in me pretty good. Powell’s Books is the greatest bookstore in the world. Those two places are within walking distance of one another, and both within walking distance of my apartment. That’s one big reason I never think too hard about moving.
If you could live anywhere else, where would that be?

Austin or New York. Maybe there’ll come a time when I need to be somewhere else, but it won’t be anytime soon.