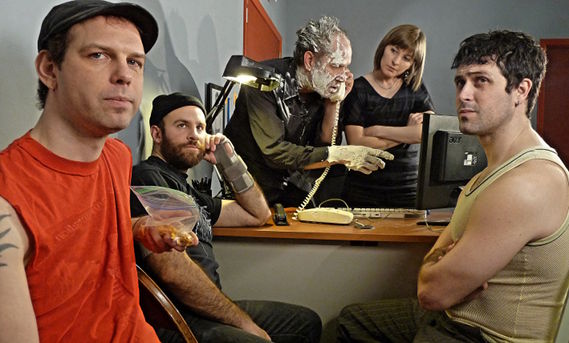 Dead Rider founder and frontman Todd Rittman is tough.  He actually likes Chicago winters, and recommends that you visit sometime, December through March.  While you probably won’t take his advice, living in what he calls “the Big Onion” helps him produce the unique rock and funk sound that the band is known for.  Read on to find out what else he likes about his hometown (as long as you promise not to steal his secret hangout).
What’s your town’s nickname?
Chicago has so many great nicknames: “the Windy City,” “City of Broad Shoulders,” “Hog Butcher to the World,” “Chi-town,” and “the Second City” to name a few.
What’s your nickname for your town?
My favorite is “the Big Onion,” which comes from the Native American name for the area, which meant “onion”.
Why do you live there?
I live here because I can get shit done.  The wonderfully brutal winters are beautiful and keep the riff-raff in their holes. The snow also covers up the filth.  It is centrally located in the continent, so touring the country doesn’t have to be all in one shot.  There is no better city in the world for music.  Great venues, studios and talent here. Really though, I love the bad winters; makes me feel alive. My friends all hate me when I say that, but there has to be someone else out there who loves a four-month long disaster every single year. Anybody…?
Did you grow up there? If not, what brought you there?
I grew up in the suburbs and have lived in the city for the last 23 years. Shit I’m old.
What’s the weirdest thing that has ever happened to you there?
This winter was the worst in ages. There was one blizzard that shut down the city for days.  The storm was so bad there was thunder and lightning all night. Really rare for a snowstorm.
What is your favorite local attraction (monument, park, etc)?
The lake is the best attraction. It really makes all the man-made stuff seem truly small.
What is your favorite local event or festival?
I really can’t believe how many festivals there are here.  Seems like more every year.  I stay away, though; I’m not good in crowds.
What is the best time of year to be there?
December through March are the sweetest months of the year here if you can survive it.  Wear more clothes and stop complaining is my advice.
Who is your favorite local celebrity?
Emo Philips.
Where is the best place to drink and what’s their specialty or happy hour?
There’s a Polish bar called Zakopane on Division with pool tables that are always open and cheap, strong Polish beer. Their specialty is grumpy Polish dudes who won’t like you.  This has always been my secret hangout to avoid the crowds on the weekend, so don’t go there.
Who has the best jukebox (and what’s in it)?
John’s Pizzeria on Western (great thin crust) has the world’s most dilapidated jukebox that randomly plays b sides from one-hit wonders from the ’60s and ’70s.  Ever wonder if Sugarloaf has a song as good as “Green-Eyed Lady?” They don’t, but the two blown speakers make every dreary jam sound like it’s the hardest soft-rock ever. Hilarious every time.
Do you play music there? If so, where is your favorite place to play?
I play in a rock and roll band called Dead Rider. The best place to play is The Hideout.  Great little room, great sound, plenty of parking, and they don’t rip off the bands.
Does where you live influence your music?
I like to think I’d make the same music anywhere I was. I’m sure I’d make less of it, though, if I lived in a warm climate.
What is your favorite place to see live music and what was your favorite show there?
Again, The Hideout is a great place to see a show. They have a free jazz showcase every Wednesday.
What is your favorite local band?
Cheer-Accident is the best band in Chicago period.
What is your favorite diner or restaurant and what is their best dish?
Murphy’s Red Hots on Belmont specializes in Chicago’s contribution to American cuisine.  Forget the hype and the lines. This is the best hot dog and fries you are gonna get anywhere on planet Earth.
What is your favorite record store and what was your best find there?
Logan Hardware is a record store and vintage arcade on Western and Fullerton. My best find there was free pinball.
What is your favorite local publication (alternative weekly, zine, website or blog)?
The Chicago Reader.
What is your favorite local shop?
Andy’s Music has musical instruments from all over the world.  Even though I’m not really into the whole world music trip, this place is cool to poke around in, even if you’re not a musician.
If you could live anywhere else, where would that be?
I hear they have some pretty interesting winters in Canada.