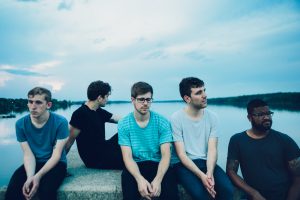 Columbus, Ohio-based indie pop quintet Indigo Wild is in the midst of its biggest year ever. Since relocating to Columbus last summer, the band has embarked on Midwestern and East Coast tours, recorded its first Daytrotter session, performed at the 2015 Bunbury Music Festival in Cincinnati, and successfully completed and exceeded a Kickstarter campaign to fund their forthcoming LP, which is expected to be released this fall. Additionally, the band will soon embark on a brief tour that stops at Dayton’s Canal Public House.
Ghettoblaster recently spoke with drummer Jason Winner about the band’s sound, label shopping and forthcoming dates.
Does Indigo Wild make pop music, indie rock, prog? How do you describe the band to your friends?
Honestly, somewhere in the middle of all of that. I think “indie pop” is an easy distinction, but we all bring our individual influences into the songs and I think it ends up being sort of all over the place. We’re constantly pushing ourselves to never make the same song twice.
How did you begin collaborating as songwriters?
Michael Norris and Garet Camella met through mutual friends and started jamming in the common rooms of University of Cincinnati. They started writing what became our first few songs, and recruited Chris Carter and I to join.
What sorts of catalysts inspire the music you write?
Lyrically, I think Garet, our primary lyricist, draws a lot of inspiration from the struggles and joys of everyday life. A lot of the lyrics on our upcoming record deal with exiting your early 20s and trying to “figure it out.” We live a lifestyle that’s very different from a lot of people around us, so a big theme in our lyrics is trying to figure out our place in the world individually and as a group.
Like I said, we all bring different individual influences and playing styles to the writing process, but musically the biggest catalyst is just playing with each other. When a guitar melody idea or a vocal harmony is presented to the group, we build it together and play off of each other. It becomes a conversation. The story unravels itself in front of us sometimes.
Does Columbus inspire the music you create?
Definitely! Columbus is full of supportive and inspiring people, both artists and musicians alike. There’s never a shortage of shows to go to, so at any given night you can walk down the street and stumble into somebody playing. As a drummer, some of my biggest influences are my friends. There’s no shortage of talent here. My favorite phrase is “Columbus is boring because you’re boring.”
You guys actually recorded a Daytrotter session. What was that experience like?
It was great! We’ve all followed Daytrotter for years and used it as a way to find new bands, so it felt good to contribute to that. It was definitely something we got to cross off of our “musical bucket list.” We drove about five hours early in the morning from Kalamazoo, Michigan, to Rock Island, Illinois, where their studio is. Chris, Garet, and Michael did vocal warm-ups in the car while I drove. It’s really surreal to do something like that and think about everybody there before you.
Was your performance at Bunbury this year the largest for the band to date? What was that like?
It was definitely one of, if not the largest show we’ve ever played. It was absolutely the most nervous we’ve all ever been before a show, but it was incredible. I’ve used this word before, but it was really surreal. It’s been a really surreal year. Recording a Daytrotter session, going on tour, having our name on the Bunbury lineup, Recording at Audiotree, it’s all been great. Being a “festival band” is an entirely different thing, so Bunbury was a huge learning experience. I don’t normally fan-boy very hard, but I got to high-five the drummer in Temples and it pretty much made the entire experience.
You released “High Point” as a single in March. Will that become a part of the next record?
It’s the first single on our upcoming record! We’ll be releasing another one as we get closer to finishing the process.
You guys recently completed a Kickstarter, raising well over the goal. Will that be put towards the next record? Have you picked a studio/producer for that?
Every dollar is going to making the best record we possibly can. We’ve already started the process, and we’re recording in Columbus at Relay Recording with our engineer Jon Fintel. The record will be self-produced with sage advice and guidance from Jon. He has a lot of experience and the best beard I’ve ever seen.
Are you self-releasing the debut LP or have you been label shopping?
Honestly, we haven’t quite gotten that far. We’ve had the privilege of speaking to a couple very small independent labels, but we’re still very early in the process. We would love to work with a label that fits our vision!
The forthcoming tour isn’t your first, but will it be your first trip to Dayton?
We’ve actually been to Dayton a few times with our buddies Speaking Suns and Sleep Fleet. This will be our second time at Canal Public House. It’s a great venue!
Will the entire tour be with Harbour? Are they friends?
They’re good friends of ours. They invited us to Cincinnati earlier this year and musically we both fit really well together. We’re excited to travel with them!
(Indigo Wild performs on Thursday, Aug. 6 at Canal Public House, 308 E. First St. Show starts at 9 p.m. Harbour will also perform. For more information, please visit indigowildmusic.com.)