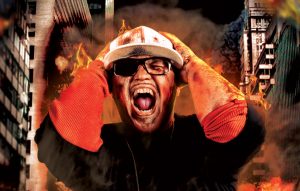 Detroit mixmaster of the underground, DJ, Clay released the perfect mixtape for a planet gone mad when he recently dropped A World Upside Down via Psychopathic Records sub-label, Hatchet House.  Featuring new tracks from Insane Clown Posse, Kottonmouth Kings, Kreayshawn, Anybody Killa and more, the effort features devastating cuts that are remixed, mashed, and diced to form the premier Juggalo party mix.
Ghettoblaster caught up with DJ Clay to discuss the world, “stayin’ in the game”, and to offer advice for budding DJs while in the midst of a tour with Anybody Killa to support the effort.  This is what he told us…
Did you have a mentor or were your DJ skills self-taught?

I’m 100% self taught. I got my first pair of tables when I was 13 and didn’t know any DJs, so I had to teach myself.
Are you a turntable and wax devotee or are you into any of the new DJ technology?

I’m in both worlds when it comes to that. The new technology enables me to do some ill shit and it’s great for live sets but I originated with vinyl, so I still use vinyl at home and always in the studio.
What advice do you have for budding DJs?
Just keep it real, man. You can go get a laptop and put it on autobeat match and that’s cool but to be notable, you need to hop on the tables turn off the laptop and practice for real. Beat match with your ear, learn how to scratch without a screen in front of you or a cue, then when you can do that you’ll only better yourself from then on, no matter what you use.
The album is described as in the press release as “a soundtrack for a planet gone mad.” Do you revel in the chaos or are there some changes you’d like to see in the world both immediately and in your lifetime?

A little bit of everything. The title A World Upside Down, is a metaphor for many things – what’s going on in the world, how the mainstream is now under us and we “The Underground” are walking on top, what’s going on right now in not only my life, but in the lives of the people who listen to my shit. It’s one of those titles that you can take and apply to what you think it means to you.
Did you road test this mix anywhere before committing it to tape/finalizing it?

Yes, amongst the artists that I work with and friends who I know will give me an honest opinion. Sometimes I’d play it in a random place in the background and not let anyone know what it is just to see people’s response.
The skits and sketches are a nice touch. How did you conceptualize those?

The best skits are the ones that aren’t pre-planned . The skits on this record were just me and whoever was in the studio at the time. We have fun in the studio so when were laughing at something that somebody just said or did I was like “Yo, we gotta record this! Hop in the booth!”
How is the tour with Anybody Killa going? Any crazy stories from the road?

It’s going great! So great that me and ABK are talking about making this an annual summer tour. I mean, this is the second year already. As far as crazy stories, really nothing out of the ordinary – slappin’ babies, kissin’ hands, beatin’ motherfuckas up.
What other plans do you have in support of the album?

I’m dedicating myself to touring all summer to support this record, got a couple video treatments being wrote up and that’s just the start. By the time all that’s done then I’m on to the next project. I can’t stop – that’s how you disappear in this game.