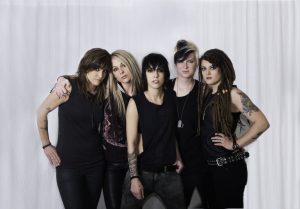 “It’s all better on the other side,” guitarist and lead singer Abisha Uhl cries on Anthem, the new EP by Twin Cities rockers Sick of Sarah. And for the band, who are self-releasing their material for the first time, after spending the majority of their decade-long career on Adamant Records, that certainly seems to be true.
It’s been a winding road to get here. Line-up changes, parting with their label, financial instability, Warped Tours— it’s all been on the table at some point. But Sick of Sarah (which includes Uhl, guitarist/vocalist Jessie Farmer, guitarist/vocalist Katie Murphy and drummer/vocalist Jessica Forsythe) have come out the other side the better for it, with a clearer artistic vision and a tight, punchy six-song EP that channels Joan Jett, The Go-Gos, Pretty Girls Make Graves and White Lung, and even Foo Fighters and Smashing Pumpkins.
Anthem is an apt title, as the EP’s tracks are each a mini-anthem for the band itself. And evidence of the band’s cohesiveness, born out of ten years playing music together, is all over it.
Ghettoblaster recently caught up with Murphy and Forsythe to discuss the EP and their run in with Belinda Carlisle.
How does Sick of Sarah fit into the music scene in Minnesota?
Katie: That’s an interesting question. It’s exciting to get on MPR with our new single “Rooftops” We’ve played a ton of venues in Minneapolis over the past 10 years and have always felt very welcomed every time.
Are you irritated when media calls you out as an all-female act or is it a flag you wave proudly?
Katie: We are absolutely proud to wave that flag. We also really appreciate recognition for being musicians in general.
Jessica: Everyone has completely different influences which brings a unique element in the song writing process. To name a few I love ’90s alternative rock, ie. Smashing Pumpkins, Foo Fighters, Bush and No Doubt to name a few.
When did you begin writing the material for the Anthem EP?
Jessica: The songs on Anthem were hand-picked by the band and we had about 40 solid ideas we had written over the past four years to go through.
What was the most difficult song to take from the initial writing stage through recording and mixing?  Why was it so troublesome?
Jessica: “Bars Fulll of Strangers” for sure. We tried several different tempos and styles. It started off as a pretty country song almost. So hearing the song now, it’s obvious that it changed quite a bit. I would say that was our main “trouble” so to speak, was agreeing on those changes.
Which of the songs on the record is most different from your original concept for the song?
Jessica: I would say “Stereo.” We were listening to some of my rough demos one day – which were all pretty slow and depressing, ha. We all wanted to write an upbeat rock song since so much of what we were currently writing was pretty slow. Jessie and I jammed on the song for a few hours and well here it is.
Did you have any guest musicians play or sing on the record?
Kate: A friend of ours, Josh Steinmetz played bass on a few of the songs.  Josh helped us on our last record, 2205 as well.
Who produced the record?  What input did that person have that changed the face of the record?
Jessica: Charles Godfrey produced our record at The Sonic Ranch. With Charles experience and expertise he helped bring the songs to life with a ton of layered guitars and challenged us with various arrangement ideas. This was our first release as an independent band and we’re so happy Charles was able to help us create, we feel, our best record yet. Charles is amazing and such a blast to work with.
Is there an overarching concept behind your new album that ties the record together?
Jessica: We’re really proud of this record. The band has gone through a lot over the last several years. Anthem represents the bands growth both professionally and personally.
Have you begun playing these songs live and which songs have elicited the strongest reaction from your fans?
Jessica: We just wrapped up the Place Your Bets Tour and played all 6 songs on Anthem. I would say our single “Rooftops” is getting the best reaction so far.
Recently you had the opportunity to perform with Belinda Carlisle.  How did that come about?
Jessica: AMAZING! We knew we had a celebrity mentor for the day and when Belinda came out during sound check we were all ecstatic. Our booking agent asked if we would want to be a part of a reality TV show called “Breaking Bands” a few months ago.
I understand that you did a few Ohio shows on your last tour.  How were those and can we convince you to visit Dayton next time?
Jessica: Ohio was great!  We got a chance to see our good friend Alicia Grodecky, who we’ve toured with several times with her former band Vanity Theft. We had Alicia jump on stage and sing a few songs with us in Cincinnati! We’ve played in Dayton before- on the first Ladykiller Tour I believe. We’d love to come back!
(Visit the band here: http://www.sickofsarah.com/.)