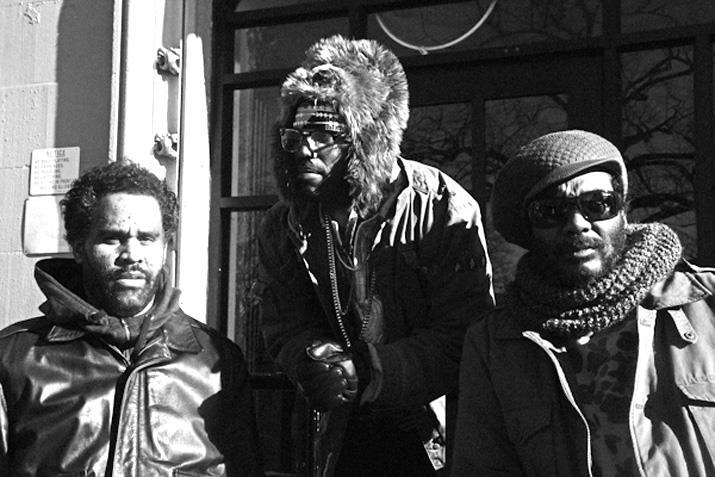 The White Mandingos, just thinking about the implications behind the band name you can’t help to feel yourself in an irony vault. Yes, that is the motivation here; The White Mandingos want to basically “flip your wig”! Darryl Jenifer of the iconic Bad Brains, journalist (& everything man) Sacha Jenkins, SHR and rapper Murs have united to crush any preconceived notions about music being made for one particular group over the other. The album takes us in to the life of Tyrone White (played by Murs) a walking contradiction, a young black kid from any hood, USA who lives bridging the gap between a hip-hip and punk-alternative world and says fuck it all…lamenting about music, “can it just be sound, can that be alright…you should listen with your heart, you shouldn’t listen with your eyes!” The album has a message for you, black or white…don’t be ignorant! I had a chance to speak with Sacha, SHR and Murs, unfortunately Darryl was not available for the convo.

Being that Darryl was the “G” on the album what was his input in executing the vision of the Mandingos?

SHR – Darryl and I worked together producing the record, obviously he’s produced so many bands and it’s his ears and his aesthetic his bass playing, his programming. There is some programming on the record, Darryl deserves credit for that. I look at a song like “The Ghetto Is Tryna Kill Me”, we came together on that and if you look at the way it was structured and how it comes together with the bass, guitar and programming. It’s a real manifestation of my influences and his influences coming together. He’s the advanced chef; he’s the hands on chef! We’ll discuss an idea, we’ll go back and forth, but if he has a real strong feeling about something, I’ll be like, “alright brother I’ll rock with how you’re feeling with this”. Also for me growing up being such a huge a fan of the Bad Brains I can’t even believe this is happening. So for a guy who’s so advanced and has achieved so much, for him to be so open as an artist to collaborate with someone like myself who clearly doesn’t have the pedigree and the experience he has, says a lot about how open he is to creativity and how something great can from damn near anywhere.

As a group The White Mandingos obviously want to come in with a unique sound and style. Was there a point in making the album where the group might have felt like it was getting to close to a Bad Brains offshoot?

SHR – Well I think that Darryl has a very distinctive sound and it comes from his fingers. My style of playing is, and I’m not Dr. Know – that brother is a real inspiration and his way of playing is a very tech-heavy guitar style. I’m a punk guitar player, (take for instance) The Ramones there was nothing complicated about what they did but it was really all in the finesse. Darryl is a guy who has his footprint in his fingers. Of course there might be hints of Bad Brains because he’s the guy, but at the same time he was very conscious of not wanting to do the same things and that’s what really excited him about the project.

Murs – I think that Darryl had a lot to do with this record; I strictly refer to him as “Old G”. I got labeled being a weirdo, rasta nigga. That’s who I was growing up in my hood, and Daryl was just the genesis of that. Darryl is all over World Star, he knows what’s going on, and he knows his shit. He knows his rappers and when he corrects me or suggests that I add something, I could be like, “oh, this old dude doesn’t know what he’s talking about”, not only does he know history but he knows what’s going on now. He knows enough to say how something may sound better or this doesn’t really belong there. When he likes something it made me even happier, same thing with Sacha who has been a journalist for so long and has been around so many classic rappers. When they give me compliments or criticism I kind of have to take it, but when they do give me a compliment it makes me feel great!

Murs, this album being a concept album and you being an MC who is a proponent in speaking out against stereotypes, was the album a good vehicle for you to convey even more your views?

Murs – These are definitely the views of Tyrone White in character, it also gave me the vehicle to promote all of my views. I grew up on Jay-Z, I love him but that’s not me. I hate being viewed through those lenses, “oh you’re a rapper you’re this…” and I’m sure they don’t like it also. I’m ok with gangster rap, I’m ok with trap music, I’m just not ok with it being the only thing promoted and pushed. This (project) gives me a chance to stand next to some other people who are well respected for some different reasons and for us to make a stand and make some good music for everyone to listen to. I just want to use every opportunity to put a different sound out there and usually it’s me saying something different over a 9th Wonder beat or a Will.I.Am beat, but now the music finally matched my message and it’s a great marriage!

The White Mandingos cover a punk classic on the album as well! Where they cover Minor Threat’s “Guilty of Being White”

SHR – He (Ian Mackaye) had all the right intentions, and it was a positive manifestation of wanting to express his feelings on race. I felt that us doing it would really say something.

http://youtu.be/l0tzZ__Z5Qw
The Mandingos will be doing limited performances this summer and just had their first show before a live audience earlier this June…

SHR – The first show was in a museum, at the New Museum down in the Bowery, NYC. It’s a very fitting way to introduce the band to the world in a museum. What we represent, I think, is culture across the board. If you look at the backgrounds of everyone in the band and the contributions to culture, I would say that my contribution has been more documenting culture and Murs & Darryl instigating culture. I think when you look at all the things that we’ve done individually and bring it together I think there is a lot of culture that comes in to the room, and playing at the New Museum was a real honor!

Check some shots from the show below and go cop that album on Fatbeats records out now!!! 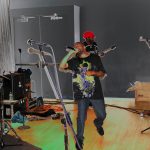 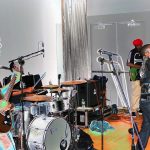 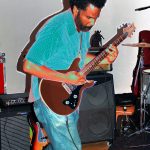