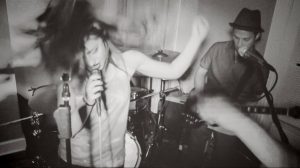 Ugly Kids Club is made up of bright, yet haunting vocalist, Aliegh Shields, and Grammy-nominated rock producer, Steve Wilson. Experimenting with all the little sounds they love, from whimsical soundscapes to lush ’80s synths, the Nashville-based duo crafts electro-pop driven tunes for ultimate enjoyment. Think pop-grunge band formed by Madonna, Andy Warhol and M83.
The pair formed in 2011 over their love for minimalist rock duos like Sleigh Bells, Crystal Castles and The Kills. At the time, Steve was producing projects such as The Juliana Theory and Jonezetta, while writing, producing and playing in his own bands, The Class of ‘98 (The Militia Group) and Hether (Interscope Records).
Aliegh, who was fresh out of high school and new to Nashville, was a guitar playing songstress with a solo development deal of her own. Already acquainted through Aliegh’s brother, Wilson came on to produce her solo tracks. In no time at all, the two uncovered a mutual desire to form a band and switched gears to create Ugly Kids Club. They were able to grab ahold of their own sound that encompassed a move toward the electronic pop genre while still paying tribute to their rock influences.
Ugly Kids Club released Head Games earlier this month and Ghettoblaster caught up with Shields and Wilson to discuss the duo format, Head Games, pop music and more.
How did you go from being introduced with Aliegh with the intention of producing her tracks to being in a band together?
Steve Wilson: I loved Aliegh’s voice and style, and as we were working through finding her ‘sound’ we discovered that we were both itching to do something new that was more adventurous and bent toward electronic rock, and it just made more sense as a band.  So I asked if I could join her band.
What is it about the rock duo format that made the most sense for this project?

SW: It seemed more exciting, pure, and stable to keep things minimalistic and forge our two minds together instead of involving more people that may not catch our vision.  It used to be you pretty much had to have a four to six piece band to realize a sound.  Now, with the advent and progress of technology it is much easier to extend a band’s sound beyond what your two hands are limited to in real time.   Plus there are less people to please. Ha.
You have a long history of playing in and producing bands.  Are there some lessons learned from those other endeavors that he’s applied here?

SW: Sure.  I guess I’ve learned that being in a band is much harder than anyone anticipates.  You really, truly have to love your music, the process and the ugly parts of growing your band  to make it to a place where anyone else takes notice.  Also, the song is still king.
How quickly did Head Games come together and what have the reactions been to it in the last two weeks since it dropped?

SW: Head Games came together within a few months of writing, dwindling the songs down to our favorites, and recording them.  It was a really fun process of exploring sounds and a pop direction that we shied away from in the past. So far the EP has gotten great reactions! It seems people are really digging it and can’t wait for more.
Was self-releasing Head Games your first choice or did you shop the record around?

SW: We always planned on self releasing Head Games.  We are still cutting our teeth live, and working on building our fan base before we feel we would be ready to expand our team with a record label.
With a sound that some may deem too pop for indie outlets and too indie for pop outfits, has it been difficult to find press that are willing to acknowledge Ugly Kids Club and give you a fair shake?

SW: We hope we’re not too indie for pop.  We’re really shooting for pop, so hopefully moving forward, we can continue to move further that way.  Having said that, we do love indie music, and it is a major influence.  I like the idea of pop, because it means music that anyone could like.
Aliegh Shields:  I don’t think it’s been difficult at all. I think that because our sound is unique and touches both the indie and the pop world, it has been more exciting and new for press to put out there.
Do you feel like you are navigating both electro and rock influences in your sound?  Who are your predominant influences?

AS: Rock will always be an influence, but the electronic world is so much more exciting because the sonic palette is infinite.  We see rock and hip hop being an influence on our pop music the way blues and gospel music were an influence on what became rock and roll.
We love classic pop artists like Depeche Mode, Madonna, and Genesis, but also modern pop like Grimes, Zedd, and Sia.  The ‘indie’ music that we’re into may just be pop that is a little ahead of the curve, such as: ASTR, Kimbra and Phantogram.
What are your foremost goals for Ugly Kids Club?
SW: First, to make music that we love. Second, to make music that people can connect to and really be able to feel something from. Third, we want people to feel an uncontrollable urge to dance when they hear our music.
It is unusual that Dayton ends up on the tour routing for most bands, especially with Cleveland, Akron and Toledo being between Detroit and New York, and with other larger cities in Ohio being within an hour’s driving distance.  How did we end up on your radar?
SW: We heard good things about Blind Bob’s and then Madhouse, our management company booked the show.  We’ve only played out of Nashville a handful of times, so we’re just excited to make it your way!
As a side note, there was a band who was signed to Militia Group, The Beautiful Mistake, who came through Dayton with some regularity back in the early ’00s.  In fact, one of them wore my old webzine’s t-shirt in their first music video.  Did you ever cross paths with them?
SW: I was in a band called The Class of 98 that was also signed to The Militia Group circa 2006.  I don’t believe we ever crossed paths with The Beautiful Mistake, but I was definitely a fan of the band.
What can one expect from an Ugly Kids Club performance?
AS: We really want people to have a really good time. It’s a very energetic performance that will (hopefully) make you wanna move!
(Check out Ghettoblaster Magazine’s Facebook page for a chance to win tickets to an upcoming Ugly Kids Club show. Catch up with the band here: http://www.uglykidsclub.com/.)