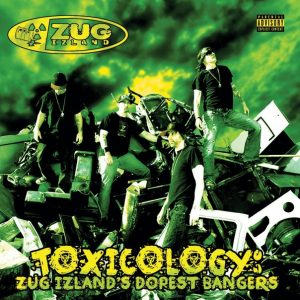 Direct from the desolate industrial wastes of Detroit, Zug Izland are the premiere rock act of the Psychopathic Records catalog. Created in 2002 by Insane Clown Posse co-founder Violent J, Zug Izland became the first hard rock act on the label and have been building their voracious fanbase of rockin’ Zuggalos ever since.  The band have rocked the Juggalo community with two well-received albums, Cracked Tiles and 3:33 and recently returned with Toxicology: Zug Izland’s Dopest Bangers, a career-spanning retrospective packed with highlights from their first two albums and three brand new songs.
Ghettoblaster recently caught up with Zug Izland guitarist Mike P. before the band announces a calendar of live dates in which the band will be spreading their dangerous brand of rock-n-roll from coast to coast. This is what he said.
Just taking the moniker Zug Izland shows your strong allegiance to Detroit.  Can you explain how you came to adopt the name and what aspects of Detroit provide the most pride for you?
The island of Zug is an actual island on the southwest side of Detroit.  It’s probably in the Guinness book of World Records as the dirtiest square mile on earth.  It seemed an appropriate name for clean cut fellows like us on the dirtiest label on Earth. Detroit was one of the greatest cities on earth, a long time ago.  Perhaps someday it can be again.  It’s a really wild and fun place too.  My family came to the Detroit area around 1880.  Some of my ancestors had to do with building parts of Detroit, such as Eastern Market.  Also some churches around Detroit have our name on plaques on their walls from the 1800s. Apparently they built it. I dunno — I was really young in the 1880s.
Are there advantages to being a rock band on a predominantly hip-hop label?
Yes. We can say we are the best rock band on this label. And it’s true.
Your fans are called “Zuggalos”.  How did that clever turn of phrase come about?  How do Zuggalos differ from Juggalos?
I think Violent J came up with the word Zuggalos.  It’s all the same, we are all Juggalos.
This year is the 10th anniversary of Cracked Tiles.  Are you doing anything to celebrate that?
I drank a lot by myself, then I passed out on the neighbor’s lawn.  It was a great celebration.
We did talk about re-releasing the original Cracked Tiles album but then we came up with the idea for the greatest hits compilation and put that out instead.  We may still release Cracked Tiles.  It’s a classic record in the Juggalo world. There are people all over the world who consider it one of their favorite records of all time.  I hear from radio DJs that tell me it’s in their top five favorite records.  Too bad DJs can’t play what they wanna play these days.  Oh well. Fuck radio.  We ain’t even trying.  We didn’t even make radio edits of the new songs.  Who cares?
What the hell was I talking about?  I’m still celebrating the 10 year anniversary of Cracked Tiles. All year.
Toxicology, which was released in August is basically your greatest hits record, right?  Which of the tracks, in your opinion, is the dopest of the bangers and why?
I really like the new songs. “Licks of Flames” is my favorite, although I wouldn’t recommend licking any flames; it can be painful. “Sunny Day” is a favorite around the universe and at our shows and the song “Always” is big in the Juggalo world. It’s a mellow song about a girl, or a friend, or a family member, or your favorite hamster.
When did you record the new tracks? How are fans responding to those?
We recorded in Detroit in November of 2012 at the Lotus Pod (Insane Clown Posse’s studio). People seem to like the new stuff ‘cause you can dance to it.
Have you fully recovered from the Gathering this year yet?  What was the highlight of the weekend for you?
I have physically recovered from the Gathering. Mentally? Emotionally?   Never. It was an awesome time. It was so much fun. We showed up early and left late.
The highlight for us was performing our show and doing one of the brand new songs (“Licks of Flames”) for the Juggalos before anyone else. Then the last night was the Deadly Medley where all of the Psychopathic artists got on stage together and did a few songs apiece.  Violent J asked me to play guitar for the whole thing.  I got to perform “Juggalo Homies” with Insane Clown Posse, a song I co-wrote with them. That was the first time we did the song live together so that was really cool.
Then Vanilla Ice came out for a few songs.  I was chillin’ on stage, playing guitar, then it occurred to me: I’m playing “Ice Ice Baby” with Vanilla Ice.  How dope is that?  Then, of course, jamming with everyone else like Anybody Killa, Big Hoodoo etc, etc.   Also worth mentioning – there were naked chicks everywhere. Some Juggalette says to me, “I haven’t had clothes on since I got here five days ago.”  I just said thank you for that. What else you gonna say?
Will you be touring in support of Toxicology soon?
I am talking to our booking agent all week about getting us out on the road.  Tour dates should be coming soon.