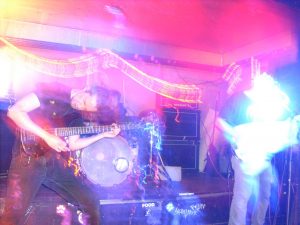 Pittsburgh’s Microwaves offer up a behemothic slab of splintered noise rock fury with Regurgitant Phenomena, the group’s fifth LP and first for New Atlantis Records. The album explodes from the drop of the needle, showcasing a ferocious power trio with taut, concise compositions, brimming with turbulent dissonance and massively energetic performances.
With robotic kineticism, the band splits the difference between the cathartic fury of punk rock, the thorned intricacies of avant prog, and the brash pulsations of no wave. Fans of unhinged, free-ranging rock music take note – Microwaves have served up a record that rips. Highlighting more focus and badass ‘rawk’ aggression than previous efforts for UgExplode and Crucial Blast, Regurgitant Phenomena is a true gift from our unseen, cosmic overlords – a bold, refreshing rock record from a unit with an impact that has potentiated over time.
Ghettoblaster recently caught up with Microwaves’ John Roman and Dave Kuzy to discuss the LP and the band.  This is what they told us.
When did you begin writing the material for Regurgitant Phenomena?
John: We started sometime in early 2012, but the band has undergone a couple of line-up shifts since then. Most of the original vision of the songs remained intact despite different bassists.
Dave: The origin of some of these songs go back before our last record came out. In fact, our previous bass player had a hand in writing at least a part or two. The bridge of “Your Last Nerve” comes to mind.
What new challenges were you hoping to undertake with Regurgitant Phenomena that you hadn’t explored on the previous four albums?
John: A good chunk of our existence has revolved around writing songs that were just a bunch of weird parts strung together. With this batch of material we wanted to push things more in the direction of traditional pop structures with verses, refrains and maybe an obvious intro here and there, but things still never seemed to develop fully on into something that boring. Every time we’d get to the point where we repeated a part two times already then moved into some sort of interlude, we’d tend to add a new part or cut things short altogether. Brevity tends to carry a little more impact.
How did your relationship with New Atlantis develop?
John: It’s developing now. Time will tell.
Did you have any guest musicians play or sing on the record?
John: If you mean famous ones then no. If you mean anyone else then the answer is the same.
Who produced the record? What input did that person have that changed the face of the record?

John: As far as producing, usually that involves another party telling the band what to do. There was no one like that present during the recording, so I guess that’s what we did. The producing, I mean. As far as the person goes that set up the mics and pushed buttons and turned knobs and all that shit, that was Jason Jouver who has recorded tons of bands as well as played in a bunch, including this one.
Which of the songs on the record is your favorite and why?
John: It’s really tough for me to pick a favorite since my involvement has little to do with listening to them which is something I’m not gonna do too often. Any enjoyment I’d get would and should come from playing the songs and since the idea is that we’ll be playing these live, I made sure that all of my parts are fun to play again and again. That’s something I can’t say about some of our previous material in the sense that in some of the older stuff, I’d either be too overreaching or shortcutting myself just to get the song finished.
Dave: I don’t know if I have a favorite, either, but I can single out “Tapehead” and “Your Last Nerve” for attention. “Tapehead” was one of the first ones we wrote for this record that was cohesive, dissonant and had the “pop song” qualities that John mentioned. “Your Last Nerve” is kind of what I think blues music in the modern era should sound like.
Is there an overarching concept behind your new album that ties the record together?
John: Not really, but certain themes creep up more than once over the course of the album. I don’t want to say what they are and not because of something stupid like it being deeply so personal or whatever. Ugh. Yawn. It’s just more that everything this round was almost written in code and it’d be like giving away the ending of a movie in its own promotion.
Are you all originally from Pittsburgh? If so, what has kept you there? What does the environment there offer the band in terms of inspiration?
John: We’re all from within about a thirty mile radius of Pittsburgh and for the most part we’ve always lived here since it’s generally pretty affordable and easy to get around in.
Dave: Pittsburgh may not be Paris or Barcelona, but there are far less attractive places to live. Also, living here is more or less cheap and it’s easy to find good food. Not only were some a-ok horror movies made here, the transmissions in Videodrome were purported to come from here.
Are there other musicians in Pittsburgh who you consider kindred spirits?
John: No. Wait… YES!! No, wait….sometimes. It’s just that they don’t consider us the same.
Will you be touring in support of Regurgitant Phenomena? If so, when will that take place and can we expect the set to focus on the new record or will it cover all previous efforts as well?|
John: We’re working on booking some shows for the 2014 touring season and while we’ll be playing songs from the new record, we’ll also make sure to play the hits. Any decent artist that’s been around knows which side their bread is buttered on.
Dave: We do play old stuff but I personally want to get on to the material written since we finished RP.
(Reguritant Phemomena will be available as a 12? LP with a free CD included for your digital gratification.  Get it!)