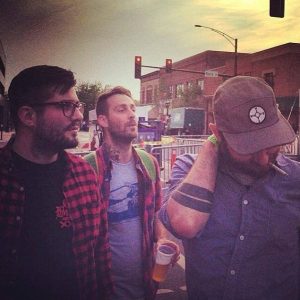 (Editor’s note: This feature originally ran in Ghettoblaster Magazine, issue 37.)
According to Evan Weiss, who is perhaps better known as the vocalist/guitarist behind celebrated indie act Into It. Over It., the recording of the latest EP (their second) from his side project/super group Their/They’re/There was governed by forces outside of the band.
“In 2013, or maybe 2012, Ed Rose (of Black Lodge Studio) announced his retirement and said that 2013 would be the final year for bands to record with him” Weiss explained.  “I remembered that when he and I were doing Proper, he was saying that he wished we’d done the record to tape, and I’d promised to come back and do a record to tape with him.  Now time’s running out, and there was no Into It. Over It. material around, because I’d just finished writing the full-length and planning everything out for Intersections.  But Their/They’re/There had finished two songs and was beginning to write a third.”
“So, the guys and I discussed it and talked to Polyvinyl and Topshelf about funding the trip.  It ended up being one of the most fun recording experiences I’ve ever had.  In fact, Ed said that if all the sessions were as fun as ours was, he’d have no reason to quit.  That was a really flattering compliment coming from someone who has made a lot of records that I enjoy.”
In addition to Weiss, who handles bass in the band, his T/T/T bandmates are no stranger to intricate, catchy emo-leaning rock music.  T/T/T’s drummer is none other than Mike Kinsella, known to the independent music landscape for his contributions to Owls, Cap’n Jazz and American Football, as well as his popular solo project, Owen.  Although Weiss and Kinsella are studied and celebrated axemen, Matthew Frank, of Loose Lips Sink Ships, handles the guitarwork.
“Matt’s guitar playing is not at all how I look at playing the guitar.  It is nothing like Mike’s playing either.  We’re just spellbound by it all the time,” Weiss confessed.  “We can’t believe the stuff that he’s able to do.  So the idea was to take that guitar playing, which at times can seem nonsensical, and create something catchy and memorable from it.  That’s the challenge; to take his out of the box playing and make it something that doesn’t seem totally insane on first glance.  Tricky songs that don’t sound tricky.”
The resulting songs offer a complex, onion peel construction.  At their core, the songs deliver the relatable narrative, customary of Weiss’ lyricism, and his knack for catchy melody.  Another layer entirely is the intricate and off-kilter work of Frank.  And providing the form and delivery mechanism for their good idea machine is Weiss and Kinsella’s solid, rhythmic backbone.
Although time was of the essence during the recording of the band’s EP, Weiss said that the real source of T/T/T’s chemistry and magic lies in the band members’ far more casual approach to their collective endeavor.
“Saying it is a ‘side project’ makes it sound like it is an afterthought.  I don’t think that the band is an afterthought, but I don’t know that it is the primary concern for any of the three of us.  Mike is raising a family, I’m on tour a lot of the time, and Matt is finishing school, so it was agreed upon at the beginning that we would do it if we had time for it.  That’s what makes the band so enjoyable to do.
“There are no expectations,” Weiss explained.  “When we write, we aren’t writing to please anybody but ourselves.  I think it is naturally for people to play music and allow a level of stress to influence performing music in a full-time project.  But being in a band for the pure enjoyment of it makes for a really positive environment.  I think it is the kind of thing that we need to keep ourselves grounded.”
A twist that no one saw coming during the Analog Weekend sessions, was that it would allow the trio to introduce a fourth collaborator to the mix; the EP features piano by James Dewees of The Get Up Kids, Reggie and the Full Effect and Coalesce.
“We did the EP on a weekend between sessions for his latest Reggie and the Full Effect record,” Weiss recalled.  “So we had an idea for a piano part, but none of us are all that great at piano, and we wanted someone who knew their way around the instrument.  So we called him up and asked him if he’d stop by the studio and he agreed
“He showed up with a box of Krispy Kreme donuts and four chocolate milk shakes,” Weiss laughed.  “We explained the idea and he tracked it in about 15 minutes, making us laugh the whole time.  It was a funny, little moment.” (Tim Anderl)