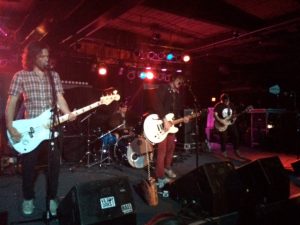 The 24th Sound Check Chat podcast with James Alex of Beach Slang, is live. The podcast is sponsored by Earthquaker Devices (http://earthquakerdevices.com/), Ghettoblaster Magazine, YouIndie.com and Frame Jump Music Videos.  The podcast is available here: http://goo.gl/vSrUC8
On “We Are Nothing” from Beach Slang’s 2014 Cheap Thrills On A Dead End Street EP, vocalist/guitarist James Alex sings, “I’m not dumb/I’m figuring out my life/Let it come/The failures are worth the fight.” This heart-on-sleeve confession comes from a songwriter who knows very intimately what he’s talking about. And he’s has dropped his guard to share it. At 40-ish years old, and formerly the frontman of Weston, a Pennsylvanian pop-punk band that enjoyed some success in the ’90s, Alex has been around the block.
Teaming with friends bassist Ed McNulty of NONA and JP Flexner from Ex-Friends for the endeavor, the super group have already managed to delight critics with their guitar centric rock, which nods to Jawbreaker, The Replacements, and host of other middle-American rock bands that found joy banging on guitars in bars that smelled faintly of stale beer. They’ve also captured the attention Polyvinyl Records who will release the band’s full-length The Things We Do To Find People Who Feel Like Us. The record is the culmination of their collective career and picks up where their two critically acclaimed 7-inches, left off. The Things We Do To Find People Who Feel Like Us will be out October 30 on Polyvinyl Records.
Previous podcasts included interviews with Boys Life, Afghan Whigs, Mineral, Grieves, The Jazz June, Lazer/Wulf and more.