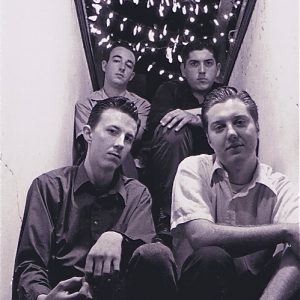 The 22nd Sound Check Chat podcast with Brandon Butler of Boys Life is live. The podcast is sponsored by Earthquaker Devices (http://earthquakerdevices.com/), Ghettoblaster Magazine, YouIndie.com and Frame Jump Music Videos.  The podcast is available here: http://www.soundcheckchat.com/episodes/boys-life-brandon-butler-departures-and-landfalls.html
Formed in 1993, Kansas City, Missouri’s Boys Life were at the forefront of the mid-‘90s emo rock movement amidst Knapsack, Christie Front Drive, Mineral, The Get Up Kids and a host of others. Although the band’s peers were more melodic, emotive and poppy, Boys Life delivered dissonant, mathy guitar-driven rock and roll that was celebrated in basements, coffee houses and rock venues through the Midwest and beyond.
The band completed their 1997 touring cycle and promptly called it quits, citing exhaustion. Although this wasn’t the end of their music making individually – members went on to make music with Canyon, The Farewell Bend, Lullaby for the Working Class, Six Bells, and more – few anticipated that the foursome would ever reunite. That was until Topshelf Records announced that the band’s sophomore LP, Departures and Landfalls, would be rereleased in August. After a 20-year absence the band has also announced that embark on a short reunion tour in August to celebrate the re-issue.
Previous podcasts included interviews with Afghan Whigs, Dads, Mineral, Dot Hacker, Grieves, Buffalo Killers, Circle Takes The Square, The Jazz June, Empire! Empire! (I Was A Lonely Estate), Lazer/Wulf and more. Future podcasts include interviews with the organizers of the 2015 Wrecking Ball Festival in Atlanta, Georgia.