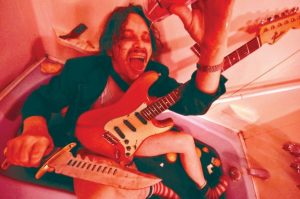 Margaret Thatcher once said, “I do not know anyone who has got to the top without hard work. That is the recipe. It will not always get you to the top, but it should get you pretty near.” Christopher Wright’s recipe is two decades in the making, and is damn near perfect. The combination of chops, fortitude and determination result in an instrumental rock band that crosses genres, decades and proclivities. In short, it’s fucking delicious …
Wright, the front man for C. Wright’s Parlour Tricks who has been immersed in the Dayton music scene in numerous ways over decades, spoke with Ghettoblaster about the band’s approach, latest EP and music science.
Your sound has elements of ’50s Buddy Holly, but also has this whole ZZ Top thing to it, and there’s a level of expertise there that you don’t typically hear in current radio rock.
My biggest influences are probably ZZ Top, Jeff Beck, Van Halen and any other guitar heroes. What I’ve tried to do with this is to get mine, but also try to give the audience what they want, too. A lot of the time, guitar guys just show off and it’s blistering exercises. That’s not what I believe in. I believe in being an entertainer, and that there is a level the bar is set at – a level I’m trying to reach before doing all the acrobatic stuff.
Your bar is set significantly higher than the entry-level guitar player …
If you want to hit the moon, you better be shooting for the stars. There’s a level to gun for if you truly want to be good. If you only set out to be as good as The Ramones, that is fairly achievable in a short amount of playing time. That’s not to say there isn’t nuance and skills those guys had the beginner guitar player wouldn’t have, but you’ll be able to emulate that relative quickly in your career.
You’ve been at this a while, and coming up in the late ’80s and ’90s, Dayton sort of rejected the whole grunge scene. Do you have a respect level for the grunge-influenced thing and where those guys were coming from?
For sure, and I’d have to take issue with your evaluation of it. At the end of the ’80s you had this rejection of hair metal and that level of guitar pyrotechnics, but there was a brief window between the hair metal and the grunge and the more alt/indie kind of thing. There was a window where metal got really smart. There was a lot of different stuff going on and it was a really great time period.
What was your introduction to the Dayton scene like?
I was in more of a heavy metal band called Scorched Earth Policy before that. We were in the Dayton Band Playoffs and placed second to Brainiac. It was a nine-vote separation. Thank God they won it or I’d never be able to live it down because they were clearly the superior band.
After a few years, that approach started to be a bummer and I started thinking, “Why did I get into this?” And I started thinking about Spinal Tap and Tenacious D put out their first album and I realized rock ‘n’ roll was supposed to be fun, and a little dangerous, but fucking fun. With Parlour Tricks it isn’t a jam band and it isn’t just a shredder guy up there. I want it to be like a circus. I want there to be the tricks, but I want it to be entertaining. – CW
Is it all practiced?
It is all rehearsed and practiced. I try to be well rounded, but I’m not the kind of guy who could take the stage and cut heads with somebody or shut them down. I fought for it tooth and nail. And I still practice a lot. A lot of it is smoke and mirrors too; taking techniques and building on them in a creative way so that it seems like the whole is greater than the sum of the parts.
Something a lot of people don’t know is you are to go-to guitar guru and shaman of Dayton. So, if you are seeing a band in Dayton, there is a chance it has been tweaked by you …
I’ve been doing guitar and amp repair for six years now and there are nights when I go to shows I recognize a lot of guitars and amps I’ve worked on. It is amusing sometimes how many of those have been through my hands. I really do care about a lot of these players and care their gear is running as well as it can run. It is important to me.
What is the end game for continuing to put out music after all the years that you’ve been playing?
When I started playing, my goal was always arena rock. Right now, I’d like to see about publishing and placement in stuff so I can make some money maybe and get the music out there. As an artist, it largely boils down to self-fulfillment; you just do it because you are compelled to do it. And I’m compelled to do it.
When will the Hot Doggin’ EP become available?
The release show was April 19. I’m working on the next full-length album. Before [former drummer] Brian Hoeflich left, he put down drums for everything we had in the can. So, we have two albums worth of stuff and it is just a matter of guitar tracking. The material is there, and we’re working on new stuff already.
(Visit the band here: https://www.facebook.com/parlourtricks.)