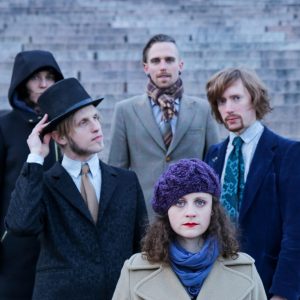 By Tommy Johnson
Frogbelly and Symphony performances are a marvel to witness. The unexpected moments that are incorporated in their live shows are what keeps the band fresh and exciting when seeing them live. During most of their shows, they will incorporate the audience. Guitarist of the band Ben Trott relived a moment during one impromptu show that involved having the crowd walk outside of the bookstore the band was playing at and sing in unison a Beatles song.
Take another example-a past show that was performed at in the lower east of Manhattan, New York. In the crowd, local actors and actresses, along with people who intensely involved within the art community hanging around, making up most of the audience. As Frogbelly and Symphony begun prepping for the set, they saw some of the actors that they knew and asked them to come backstage. The band and the actors crafted up a story within a few minutes centering on a dragon that is needed to be slain. Whatever individual that brings down the dragon will be rewarded with having the honor of taking vocalist/keyboardist/violinist Liz Hanley’s hand in marriage.
As the set rolls on, the band announces to the crowd of spectators that they are the mayor of an imaginary city, and the large monster that processed serpentine or reptilian traits was needing to be killed. They then explained the reward for accomplishing the heroic act. Immediately, the actors started to set the story in motion.
“One guy was playing the dragon, and the other guys beating the shit out of him to the extent that the bouncer came in and thought it was real,” vocalist and bassist Tommy Hanley explained. “It was a little bit of a mayhem. Maybe a little bit over the top, but it did create a good moment.”
Frogbelly and Symphony have been bringing these types of theatrical rock show memories to audiences around the United States and the UK since their inception in 2011.
“We are inspired on our travels by something specific, and we think that we need to weave it in. Sometimes we spontaneously show up at a venue, and feel something on the spot,” Liz mentioned.
After Tommy Hanley met Liz (both are now married) in Hamburg, Germany when their bands were playing in the same bill one night, the duo wanted to start making music together.
“Our first show was in Berlin, and then we played some shows with some friends in England,” Liz says. “We scrambled to come up with a name…so we came up with the name Frogbelly and Symphony almost as a joke. And we just kept it.”
In the autumn of 2011, Liz and Tommy went to a folk session at a bar called “Trippets.” At the session, they met the bands guitarist Ben Trott. Trott has studied classical and jazz guitar in Sheffield, United Kingdom area and is an integral member of the traditional folk music scene in the UK. The threesome began exchanging music ideas, and soon started developing a strong connection musically.
After the trio started to write and compose music collectively, they packed up and traveled to New York City to work with producer Martin Bisi. Hanley first met Bisi several years ago through Philipp Caspar Frederick, and old friend/bandmate from a previous band also who fills in on drums, guitar, keys, and vocals for various shows. Frederick randomly ran into Bisi in first trip to New York one night. When Hanley was in town, Frederick introduced Hanley to Bisi. Once Frogbelly and Symphony started to pick up momentum, they sent Bisi a rough demo and inquired if he would be interested in the band-which he was immediately onboard.
Frogbelly and Symphony’s The Eye is a heart-pounding EP, which features progressive rock sound that echoes in folk landscapes. Beautifully arranged pop melodies, repetitive chants trickle throughout this gorgeously produced, experimental sounding disc. “Amour Fou”, the disc’s opener, starts with the clacking of the band’s regular drummer Ray Rizzo joining Hanley’s haunting bass line followed up by an intense explosion of alternative rock, and Liz Hanley’s erupting vocals. Brooding, echoing vocals make up the spacey “Sugar Castles.” Lyrically-the band influences on the intellectual works from John Clare, and Joseph Heller. The Eye was recorded in the Bisi’s infamous BC studio in Brooklyn, which has seen bands like Sonic Youth, Swans, Dresden Dolls pass by.
“He is the master of ceremony,” Tommy Henley gushingly says when talking about Bisi. “He really captures that energy…he is very skilled to catch the vibe of the band inside the studio.”
Liz Henley added, “He knows that room so well. He knows every inch of it. He knows where the sound bounces off, what amp works better in each corner, where the drums are brought off the best.”
Currently, the band have material already recorded to make it a full-length, which hopefully be released early 2015. A tour around the US and UK is also in the works. This means expect more improvised moments that will have the audience come into being part of the show.
(To hear a sneak peak of what’s in store for the new album, listen to “Patch Of Blue” here: https://soundcloud.com/frogbellyandsymphony-1/patch-of-blue-new-album-preview.)

New Music | Friday Roll Out: This week we take a d

Check out the video for @momma.band 's new single