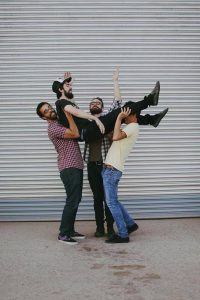 Brujas del Sol are an audible amalgam of influences that leaves little beyond their musical stratosphere. The Columbus quartet’s sounds are psychedelic, spacey, and massive in scope. Krautrock influences leach into their cosmic racket, as the band set a course for loud, swirly, droney, and sprawling compositions.
Gearing up for a fall tour that finds the band headed east, Ghettoblaster caught up with BDS’s Adrian Lee Zambrano to discuss the band’s 2013 Mooliner LP, the band’s modus operandi, and what he’d do in the case of a close encounter.  This is what he told us.
What are the foremost milestones that Brujas del Sol have been able to accomplish in 2013?
It’s been crazy. First, being able to play music is the best accomplishment of them all. We’ve all been playing for years and being able to come together and share the gift of music is the best high. However, releasing the Moonliner LP on Devouter records and opening for NAAM have to be up there.
What is it about the band that makes this collaboration so rewarding?
It’s the perfect marriage of personalities. Derrick White is very outspoken and is always the first to push an idea further. Chris Mengerink is the most technically gifted and helps us tie things together. And Ryan Stivers is the calm and collected one, the voice of reason and calmness. Nothing seems too difficult. We just get in a room and from the first note, chord or noise, things just roll smoothly.
It’s safe to say that I am playing with some of the most inspirational musicians I’ve had the chance to play with.
Mooliner was released in March, correct? Was it a compilation of material from previously released EPs?
March 23rd. It was a compilation of the Moonliner EPs. All comprised two songs a piece, sort of following a theme…a direction.
Where did you record the material originally? Did you rerecord the material?
The material was recorded at Electraplay Studios in Hilliard, Ohio with James Allison and Ben Rholetter. The material wasn’t fully rerecorded, however, we did go through and lay all new keyboard parts, some guitar stuff and did a complete remix and remaster. It really tied the album together.
How actively have you toured in support of the release, and what has the reaction been outside of Columbus?
Tons of long weekend stints. We’ve been pretty well received. It’s always nice to have people tell you positive things. Having people tell you that your music means something to them, that’s one of the most rewarding aspects of doing this.
Have you begun writing for another full-length record? If so, when can we expect to see that release?
We have. Expect a 7” late this year/early next year. Expect a full length in the Spring. The music is there, we just feel there’s more to be realized. It’s all really awesome stuff. Much more synth and organ based.
It seems as though you’ve got a decent peer group in Columbus with Brainbow, EYE and Lo-Pan. Have those guys provided any mentoring for you or shown you the ropes in any way, or do they just provide local inspiration?
Totally, dude. Adam Smith from EYE actually mastered the Moonliner LP. I’ve said it before and I’ll say it again…he’s been our Gandalf. (We’ve also got a sweet holiday show with them planned the Wednesday before Thanksgiving).
The guy’s in Lo-Pan are darlings. Super helpful and positive guys. We’ve talked about doing something together next year. Maybe something in support of our 7”. We need to hash out some more details, but, it’s been discussed.
Unfortunately for us, we’ve never gotten the chance to play with Brainbow. They’re all SUPER busy. But, nonetheless, one of our biggest influences. Hell, all these dudes are. To even be mentioned in the same sentence as them is an honor in and of itself.
You’ve done some pretty awesome supporting gigs in the way of Alcest and NAAM. Does it make you nervous to play a supporting role where the crowd may not necessarily be familiar with you or is it fun and challenging to try to win them over?
The only nerves are because we’re playing for some of our biggest influences, if I’m honest. We’re pretty honest dudes, we love what we do and we hope that comes across in our live performance. Music is about sharing, caring, having fun and being loud. Everyone we’ve met and talked to can dig that.
With a name that translates to Witches of the Sun, I imagine that you’re at least slightly interested in the universe and outerspace, right? Do you believe we’re alone in the universe?
Alone? No way. Even if we weren’t science fiction nerds and universe nuts, it’d be near impossible to convince us that we’re the only beings to inhabit the universe.
What would you say to an extraterrestrial being if they tried to contact you?
I’d want to be cool and invite him over for a beer, but in reality I’d be scared to death and probably run and hide. So, probably something like, “uhhhhhhhhhhhhhhhh” with a river of drool coming out of my mouth…That is if he didn’t use his ultra-gamma raygun to stun me, kidnap me and use me as a test subject to infiltrate the U.S. government and unleash the truth they’ve been hiding from us.
(Check out the dates for the band’s fall tour here: https://www.facebook.com/events/378060842323788/.)