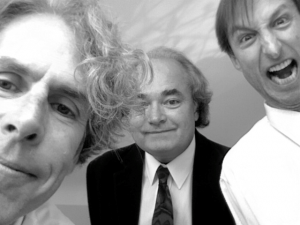 Once upon a time, legendary music industry mogul and record producer Clive Davis visited Cincinnati. The rumor making its way through the grapevine was that his intentions were to offer The Raisins a lucrative contract. Although he departed the city without signing The Raisins, music lore has it that his departing words were, “They’re an embarrassment of riches.”
While The Raisins didn’t land a deal, the missed opportunity did little to dismantle or deter the band. In fact, they did find a fan in Adrian Belew (and teamed with him for The Bears) renamed themselves Psychodots and have spent the better part of several decades delivering exquisite rock nuggets that are undeniable ear candy to fans of solid and studied songcraft.
Ghettoblaster recently chatted with Rob Fetters about the band’s legacy, success and the band’s love affair with Dayton, Ohio.
Is it true that the band changed its name from the Raisins to avoid confusion with the California Raisins, which was a commercial phenomenon in the late ‘80s?
Nope, I don’t know where that rumor came from. We just wanted to start fresh and a girl in the audience yelled, “You guys are Psychodots!” She wasn’t tripping – just had the inspiration – and we felt like the name made sense considering our own psychedelic experiences during our wayward youth.
Did the Raisins once have a brush with Clive Davis?  Were you devastated when he left without giving the band a deal, or did it work out in the long run?
Yep. He expressed a desire to sign us, flew to Cincinnati to see a live performance, then nixed the idea. I think it was worse for our management team than the band. It really took the wind out of them. We were very unfocussed, which made us an interesting live band on one hand but hard to market on the other. But eventually the failure led to the formation of The Bears.
How did Adrian Belew’s support of the band help the Psychodots to find new audiences?