DAY TWO:
If you’re familiar with modern board gaming than you’re familiar with Settlers of Catan. Unlike in music where being famous normally equates to being shit, Settlers is a great game. Created by Mayfair Games they took the concepts of resource collecting into their onsite exhibit – awarding folks who play test their games with a Wood, Clay, Sheep, Stone or Ore ribbon. Once you’ve collected all five you get a special board for Settler of Catan and a 50% off coupon! This proved far too tempting of an offer so the entire morning was spent in the exhibitor hall play testing Mayfair’s games. Here’s a quick rundown… 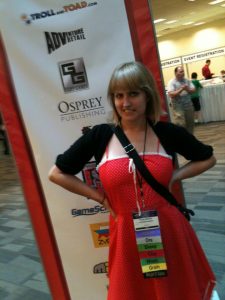 Nuns on the Run: some players play as nuns trying to sneak contraband materials back to their rooms and another player plays as the prioresses trying to catch them. Awesome game that’s completely unlike anything else you’ve played (probably). We bought this one with our coupon.
Station Master: A card game where you load up trains with posh passenger cars for your locomotives and stinky fish cars for your opponents. Quick and ever changing, this game was a lot of fun!
Settlers of America, Trails to Rails: Historical Settlers of Catan set during the westward expansion in America. A few fun twists on this to separate it from its springboard game, the only drawback would be if a two-hour game intimidates you. Coward.
Horus: This game very well could have been a lot of fun – a tile placing game for gaining influence on the land on the Nile River valley – but we played it with two very smelly and unfriendly nerds, so… yeah. 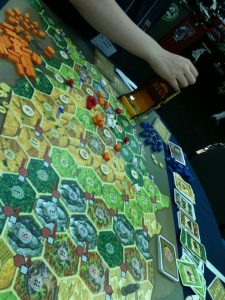 Across High Street again, we went to Columbus’ amazing Northside Market for lunch. I have to say that one of the greatest things about Origins could be its location. Right in the heart of the Short North, there’s no shortage of other fun things to do (and eat) within a short walk.
Then back into the exhibitors hall to take advantage of all the things we scouted out the day before! First up was iello Games’ King of Tokyo. Half cards and half dice in its gameplay, King of Tokyo was a real blast and beautifully done. Not too complicated, but fast-paced and with enough choices to keep things interesting. Probably would have picked this one up too if it weren’t for the $40 price tag. Maybe at the next Con one of the dealers will have it a little cheaper. 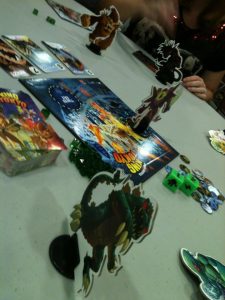 Going full gear on gaming for the past 24-hours, we took this opportunity to wander around some of the other things Origins had to offer. It’s important to note – for everything I’ve written about so far, there’s at least forty other things going on at the same time: gaming tournaments, miniature painting, film screenings, autograph signing (someone in our group got Felecia Day’s) and bunches more. We wandered through the art room for about 45 minutes before building up our resolve again to dive back in.
Heading back to Rio Grande’s gaming room we checked out Pantheon, a game set around the Mediterranean Sea where players build temples and try to win the favor of the gods. It was a fun game with neat pieces but the way things played out it gave the impression that after a few play throughs it might be easy to figure out how to best win and everyone’s just going to do that one thing. 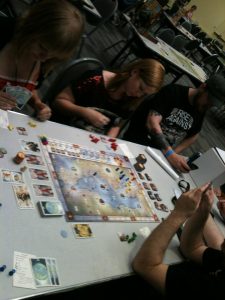 Feeling a little burnt out on crowds and… certain other aspects (were we able to get #ConStink to trend on Twitter at any point?), the Ghettoblaster crew wound things down by taking the games we got to a quiet table in the gaming room. One awesome find by Ghettoblaster Video Game Associate Editor, Kris Poland came in the form of Cryptozoic Games’ Epic Spell Wars of the Battle Wizards: Duel at Mt Skullzfyre. Adultswim fans will immediately recognize the awesomely over-the-top violent art of Superjail’s Nick Edwards who does a great job with the cards for Epic Spell Wars. You’re a wizard and you try to kill the other wizards, but don’t worry if you die – you get special dead wizard cards to make you kick even more ass when you come back to life in the next round. Lots of fun!
So that’s it! What seems like a billion games later, Ghettoblaster had experienced a great convention at Origins in Columbus. If you love gaming, but you’re the only one around where you live who does – you should definitely come. If you’re a lonely and isolated nerd – you should definitely come. But moreso, if you’re just a good dude or dudette who can sit around a table, drinking, bullshitting and competing against one another, you should definitely come to Origins.