As many of you know, there’s a heck of a whole lot more to board games than just chutes and ladders. Columbus’ Origins is a four-day celebration of the many things that come after those early boxed activities that taught us all how to roll the dice. The games, the culture and the community, there’s more to it than you could possible imagine before seeing it all crammed into the Greater Columbus Convention Center. Origins 2012, buy the ticket and take the ride! 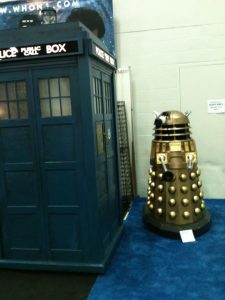 DAY ONE:
Arriving mid-afternoon on Friday, any repeat convention attendee will tell you that this is the time to take advantage of the smaller-sized crowd. Though already somewhat congested, the halls and rooms are all at about half occupancy compared to the throngs that will be arriving on Saturday. People watching and mass camaraderie is great, but so is elbow space and shorter lines.
So first on our list of things to do was a walk through of the exhibitors hall. Like most other cons, Origins’ exhibitors hall is laid out like a flea market with rows and rows of vendors, both independent companies offering their games directly (with helpful folks on-hand to help explain and play through a quick demo for you) and local and regional shops with new, used and discounted stuff.
Though smaller than nearby Indianapolis’ Gen Con (one of North America’s largest gaming convention with just over 36,000 people attending last year) many of the same big dealers and companies were present at Origins along with a few indie companies as well. Role playing books, collectible gaming cards, board games from all eras and countries, the obligatory Cthulhu paraphernalia – if it relates to gaming or more broadly to geekdom it’s probably here and for sale. Since there was nothing in particular we we’re looking for or were super concerned would sellout, day one was for looking and day two would be for buying.
Another awesome non-music thing to dork out about is beer and Barley’s Ale House just happens to be right across the street from the Columbus Convention Center. Creating a special Origins-themed menu, the Ale House was temporarily renamed “The Brewpub at the End of the Universe” ala the second book in Douglas Adams’ science fiction pentalogy, Hitchhiker’s Guide to the Galaxy. But we came here to drink beer, not get caught up in gimmicks (no matter how fun they may be) and between the Rye IPA, Russian Imperial Stout and our personal favorite, the Blood Orange Wit, Barley’s did not disappoint. Add a couple of shots of Woodford Reserve along with a mixed drink dubbed the Pan Galactic Gargle Blaster (another Hitchhiker’s reference) and we were merrily on our way back across High Street to the Convention Center. 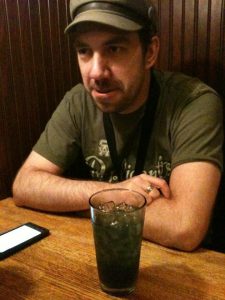 Separate from the exhibitors hall, there was a general board gaming room that offered a number of new games and games up for Origins Awards for attendees to take and play, free of charge. One that was available and had caught our eyes from earlier in the day was Banditos. The setting of the game is at the US/Mexican border during the 80’s when the Mexican governments centralized their banking system leading to “unstable” (ie. easily rob-able) situations. Playing as American “Banditos” looking to take advantage of the situation, it was a fun concept with well-done art but clunky gameplay stretched things out a little longer than our interest allowed. 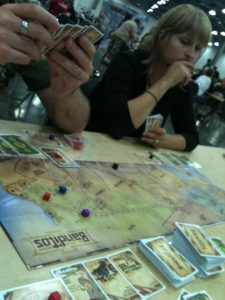 Also separate from the exhibitors hall (long closed by this point in the night), a few of the larger gaming companies had rooms of their own filled with tables of new stuff to try. Rio Grande (makers of Carcassonne, Dominion, Puerto Rico and Power Grid) was one of said companies and before they kicked us out for the night we thought we’d pop in to try Alan Moon’s new game, Airlines Europe. Moon’s big game that you may know is Ticket to Ride for Days of Wonder and there’s more than a bit of influence taken for Airlines. Players develop airline routes between the European cities and invest in their stocks (similar to Acquire). Neat art and fun little plastic airplane pieces, I wouldn’t be surprised if this one eventually found its way onto our shelf. 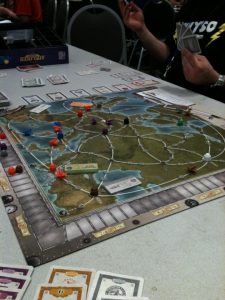 After that it was back to the hotel room for a late night Pathfinder session. If you don’t know what Pathfinder is, the elevator pitch is that it’s basically Dungeons & Dragons third edition. If you don’t know what Dungeons & Dragons is than get outta here! I kid. Anyway, the module we played was a short 16-page campaign from 2011’s Free RPG Day entitled We Be Goblins. As you might have guessed, you get to play goblins which lead to all sorts of great situations like, “Should I lob a bomb down that chimney? Seems a little rash… oh wait, I’m a goblin! Fuck it and chuck it.” Perfect nerdy end to a perfect nerdy day. 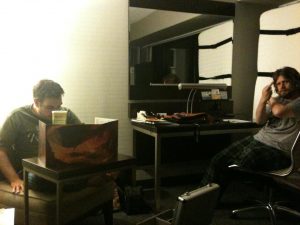