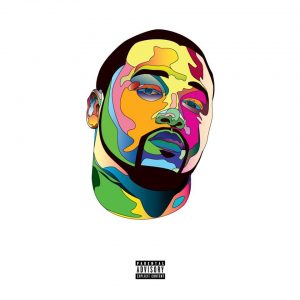 By Tommy Johnson
Dayton, Ohio-based rapper K. Carter proudly wears the label of being a nerd proudly on his sleeve. He graduated with a bachelor’s degree in computer science. His day job consists of working with computers. He is an avid video game player, and is in tune with all of the upcoming releases sooner than most. He even hosts his own podcast show that dives into topics that deal with video games. When I met up with Carter, he wanted to make clear that this isn’t some attempt to fit in a certain niche.
“I’m a cyber-security engineer. It’s not a façade. It’s not a gimmick. It’s really who am I,” Carter confidently states.
After releasing his mixtape The Spin-Off a few years ago, Carter has seen his exposure with his music find its way towards areas of Australia and Sweden. On July 4, Carter released the much-anticipated debut LP tilted Revenge Of The Nerd. Starting with the writing stages back in November 2013, Revenge Of The Nerd highlights Carter’s fun-natured attitude lyrically on top of sizzling beats that bounce around influences of neo-soul and rap today. Carter visualized during the making of Revenge Of The Nerd that he wanted to play homage to the time spent with Ali-making people see what he is saying, as if he is telling a story.
“I try to be very descriptive,” Carter explained when he spoke about his writing process. “The Harry Potter books are always better than the movies. There’s more information in the book. I want my words, my music to be the book. Not the movie.”
Residing in Dayton for a large portion of his life, Carter temporary moved with his family to Tallahassee, Florida. While wrapping high school, Carter started tossing around the idea of pursing music. One person in particular started becoming aware of the potential that Carter had-his boss at the Tropical Smoothie he was working at. The manager, Ali, would overhear Carter silently spout out lyrics that he made up at the spot. Ali was a well-regarded poet around the area and noticed Carter could really make a name for himself as well. Carter started doing rhyming drills with Ali at first; concentrating primarily on having the sensibility of expanding the mind to areas that haven’t been tapped. Ali and Carter attended poetry slams regularly. One in particular was held in Miami, which Carter called it “one of the craziest and best atmospheres of my life”.
Once Carter felt that he mastered what he absorbed from Ali’s teaching, he become more engaged in putting his words to music. He quickly started to get into more situations that allowed him to showcase his work. In 2007, a lock punk/pop band had Carter come in and sing on their upcoming album.
“I did the verse to their music, they didn’t switch nothing up…when I get it down I wanted to do over. I looked up and all five of them were staring through the little window like ‘Oh my god! Is that real? Did that just happen?’” Carter explained.
Carter’s first time performing in front of a live crowd was with the band he recorded with. The audience was kept out of the loop knowing that Carter was scheduled to come out at some point during the set and perform with the band. Once he walked out to do his part of the song the ensemble recorded, Carter looked out to every single person in the audience.
“I started rapping and I’m telling you-it erupted,” Carter gleefully recalled. “I’m out there and girls are putting their hands out wanting me to shake them. When I got done, everybody was saying ‘Hey-what’s your name?’ That’s when I knew-I’m good.”
Going along with his carefree, fun attitude that he lives by, his goal is to continue developing a large following that will continue to push him more and more.With the release of Revenge Of The Nerd, Carter is ready to start implanting his name into the rap game in ways that allow him to stand out.
“I have a message…I feel it in my heart that I can’t change the world, but I change people’s minds to think; to make this world better. Or just make it more positive.”
(Grab your copy of K.Carter’s Revenge Of The Nerd on iTunes at https://itunes.apple.com/us/album/revenge-of-the-nerd/id999976057.)