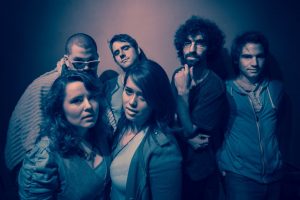 By Tommy Johnson
Berklee College of Music in Boston, Massachusetts is where you can trace the humble beginnings of Bent Knee. Each member of the group attended and graduated from the school. The school is without question one of the best places to attend as they prepare themselves to head into the music business. With the enrollment just circling around 4,200, it’s hardly an issue for students to form collective clusters that eventually morph into something more.
The formation of Bent Knee occurred by happenstance. In 2008, violinist/vocalist Chris Baum along with guitarist/vocalist Ben Levin were both booked on the same bill with their respective bands for a show. Their paths crossed when Baum surprisingly broke a string off his instrument during their set, but was able to get a replacement from someone in Levin’s group, Oliver Jacobson. The kind gesture helped create a relationship between Jacobson, Baum, and their bands.
Baum explained that it wasn’t till Jacobson leaving Berklee for a semester to travel overseas did Levin and himself began playing music together. An instance that would soon become more than expected.
“Ben needed a sub on violin for his band when Oliver was gone, which turned into me.”
While returning back to the group’s headquarters after putting up flyers in Providence, Rhode Island supporting the band’s start of their summer tour, Bent Knee singer/keyboardist Courtney Swain joined in the conversation. Swain revealed that during the show, she was in the crowd. Levin and Swain started corresponding with each other after the show, which resulted in them performing together.
The time during their inception of the group included some touring, which allowed them to experience what life on the road was like. When the group disbanded, the vision of Bent Knee became more clear. On the heels of the band’s first show, Baum attached himself quickly in the mix and joined the ensemble.
“When Chris Baum says he wants to play in your band, you don’t say no. You just don’t (laughs),” Swain playfully declared.

Since early 2011, the lineup of Bent Knee has been the following: Levin, Swain, Baum, Vince Welch on synth/sound design, bassist/vocalist Jessica Kion, and drummer Gavin Wallace-Ailsworth. And each individual’s personal influences differ from one another. Baum and Swain studied classical music throughout most of their lives, while Levin was tapped into progressive rock (Frank Zappa). Wallace-Ailsworth couldn’t get enough of the eccentric music from the ’70s and ’80s growing up. For Kion, singer/songwriters are mostly on her list of preferences. Bands like Nine Inch Nails swayed Welch for many years growing up. With this diverse span of musical genres combining, the end result is stunning. Bold, and defying, Bent Knee’s music is truly unlike nothing you have heard before. An exquisite art-rock approach that pushes elements of heavy psych, baroque pop, and avant-jazz awaits in each song.
“I think our influences have merged a lot now that we have been hanging out as a band for five years,” Baum added.
The band’s 2011 release, the self-titled album Bent Knee, featured mostly the collaboration between Swain and Levin. The others wrote their parts around them in part because most of the album was already written before the current lineup was locked down. When the time came for the start writing the group’s follow-up Shiny Eyed Baby, Swain explained that a change was needed.
“I just didn’t want Bent Knee to become a band that was just Ben and I. I wanted everyone to have a stake,” Swain explained. “What we were during together as a group was so interesting and I have come to appreciate how amazing the musicianship that’s in our band.”
Shiny Eyed Baby dramaticallysymbolizes the flourishing growth that Swain and company strived for as the album marches on. Swain noted that the long period of time devoted to being a member of Bent Knee gave everyone the freedom to be vulnerable. As a result lyrically, the uncertainty of the world after school drove the ensemble towards exploring feelings they haven’t tapped into yet.
“That particular moment of finishing school and finally having this life in front of you that’s not scripted by anyone is really exciting for five seconds,” Baum says. “Whenever that comes up (the anxiety of what needs to happen next), you delve into rooted emotional issues; how you feel about yourself, how you feel about the world.”
“A large theme of the album is relationships,” Swain adds.
At a show in the heart of Dayton, Ohio this past June at Blind Bob’s Bar, the six-member ensemble of Bent Knee ripped through their catalog with such raw, incredible force. Watching a set from Bent Knee for the first time, be prepared for a full-fledged rush to go straight through you. You feel the heart racing with an accelerated speed that was far from normal. Your mouth becoming almost too heavy to hold in its position and it soon starts to open more and more. Your eyes rapidly bounce around to each member; taking in their impeccable instrumental play. The chills soon follow as you can some of the hairs rising up from my arms.   You have to take a minute to catch your breath after being witness to the band’s set. Pretty standard for most that watch Bent Knee play.
Throughout this summer, Bent Knee have packed up their vehicle and toured all over the United States and a short stop in Canada. According to Baum and Swain, the twelve week odyssey was billed as the longest tour of the band’s to date. Wrapping up the tour this past week, Bent Knee have no plans of slowly fading into the sunset for a time of relaxation. They are already planning on going into the studio to record a bulk of the third album, slated to be released in the spring.
(Pick up Bent Knee’s albums and see upcoming dates here: http://www.bentkneemusic.com/.)