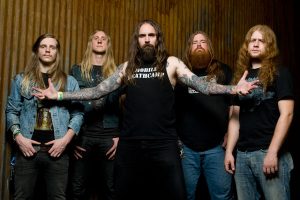 When I first encountered Scott Hedrick, he was a quiet and unassuming shaggy haired undergrad studying at one of the top journalism schools in the country (Go Bobcats!). At some point during his tenure in Athens, his hair grew past his shoulders and his life’s course diverged from a one-way ticket to the newsroom, toward the bright lights and stages of rock clubs worldwide.
As the axe-wielding, metal maniac from hellions Skeletonwitch, Hedrick still maintains some ties to his journalistic roots. In fact, just this week he had a feature in Revolver rock magazine titled, “Top 5 Worst Places to Take a Dump on Tour”. In all seriousness, he has also become the mouth-piece for his band, often finding himself on the business side of interviews and press requests. And these days he’s got a lot to talk about.
Skeletonwitch’s forthcoming fifth album, Serpents Unleashed, ties a bow around the band’s rambunctious first decade of blackened metal. For the album, which will be released in North America on October 29, the band recorded at GodCity Studio with Kurt Ballou (Converge, Trap Them, High on Fire). To celebrate, the band will hit the road this Fall supporting Swedish occult rockers Ghost B.C.
Ghettoblaster recently caught up with Hedrick to discuss their recipe for success, the forthcoming tour, and what might be behind Papa Emeritus’ makeup.
What has Skeletonwitch’s recipe for success been? Has most of what’s good for the band happened because of your willingness to be road warriors?
Hard work and good tunes. Simple formula, but easier said than done. Touring as much as we do is and was essential in building and growing the band. If you want to be a musician full-time, don’t wait around for someone else to help you. Write songs and book tours. Make it a full-time gig.
You’ll be heading out with Ghost B.C. in coming weeks and we’re dying to know what you really think of the record. I think it sounds like the satanic Monkees…
Ha ha! I enjoy it. I’m a sucker for a good melody and there’s plenty to be found on there. Costumes and satanic parody aside, they write some good tunes.
Does Papa Emeritus’ makeup freak you out at all? It does me…
Ha! Not anymore because I’ve seen what’s behind it…..but I’m not telling.
I’ve heard they are partiers from a very reliable source (Gary Spencer). Are you guys pretty rowdy on the road or has the “live hard, die young” lifestyle of a touring metal head outlived its allure over the years?
A few drinks here and there certainly ice the bruises of touring, but we can’t behave like we did 10 years ago, or the show would suffer and that’s our top priority. Peeling your sweaty, hungover ass off a dirty floor in the morning is something that loses its luster after a few hundred times.
Who is the rowdiest band you’ve toured with (in a good or bad way)?
In a good way, Black Tusk. In a bad way…Black Tusk.
Have you been debuting songs from Serpents Unleashed live already? What has the response been like?
So far we’ve only played “Burned From Bone”, but the response has been great. We’ll be rolling out most of the record into our set throughout the next calendar year.
How much of the setlist for the upcoming dates reflects “the hits” and how much of it is newer material? Which of the SU songs do you believe are future fan favorites and why?
For the Ghost shows we have a shorter set, and the album won’t be out yet, so we’ll probably bust out two or three new ones, plenty of old favorites, and a couple oldies that we rarely play. We always try to keep a good balance that represents each record. Once the new record comes out ( on October 29 via Prosthetic Records) you can expect a very Serpents Unleashed heavy set.
Are you a Converge fan? If so, did it make working with Kurt Ballou that much sweeter?
I am, indeed. It definitely made it sweeter. He’s a great guy and has now become a friend. It was interesting to see him in his element. The man knows his way around the studio and is, unsurprisingly, a huge gear nerd. He would put a song on repeat and twiddle knobs for hours, and then say something like, “that’s better…”  Hell if I could hear the difference! Ha ha. My ears are shot.
Does it irritate you that he makes playing incredibly fast, complex stuff look so effortless?  Is he like that with everything or is he secretly a type-A personality?
Ha ha! A little bit. He just has a knack for it, but it’s also a drastically different style than what we do. I do get the sense that he can pick up any object/electronics and take it apart and put back together again. That irritates me because I can barely change the strings on my guitar. Ha!
And the dude from Baroness did the cover for the record right? Is he doing any of the SU merch?
Yes sir. John Baizley. We used play house shows and D.I.Y. spaces with Baroness way back when both of us were getting started. We’ve been friends for a damn long time. He’s only doing the cover art, but there will be shirts, hoodies and posters of that art.