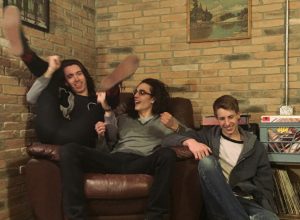 Young Dayton, Ohio, rock and roll trio Manray have as much in common with Buddy Holly or Captain Beefheart as they do with more current rock noiseniks like Ty Segall, Black Lips and Thee Oh Sees. Simply they aren’t afraid to innovate, even while holding themselves to time tested rock standards. With this modus operandi driving the band, they’ve already released a ferocious self-titled LP, which they recorded a month after forming in early 2014 with Shaun O’Shaughnessy at FM Studios in Dayton. And there are no visible signs of the band losing momentum in the near future.
Ghettoblaster spoke with the band, guitarist and vocalist Joey Beach, bassist and vocalist Alec Snead and drummer Matt Carey about the band’s forthcoming recording and promising future.
Have you begun recording the follow up to your 2014 debut?
Joey Beach: We’ve just begun tracking our second album, which has been in the works since we released the debut last year. Essentially we’ve already recorded it once, as we did demos for the entire album in my basement starting in October. We wanted to sit on the new songs for a while and make sure they were completely fleshed out before we actually released anything. The first album was recorded pretty hastily and a lot of those songs ended up changing quite a bit after playing them live so many times. With the new album we wanted to avoid that as much as possible and to concentrate on putting out the best record we can.
Is the new material more of the same or are there some new tricks that you’ll be taking advantage of?
Joey Beach: This new record is a lot more diverse than the first, which was largely comprised of straightforward blues songs that I had written before the band came together. The new songs were written more collaboratively, and for that reason I think this album will be a better representation of who we are as a band.
Our songwriting hasn’t changed drastically, but an emphasis has been placed on writing catchier tunes that are still interesting and complex. There are also some jams and longer songs on this record, which are things we didn’t really have on the first, so it’ll be a nice mix of styles. We’re really giving this one all we’ve got.
Will you have label support to release it?
Alec Snead: We plan on releasing the album with our friends at Great Guys Records in Athens, Ohio. They’re running a crowdfunding campaign to fund our new release as well as five others from some awesome bands in the Dayton, Athens and Cincinnati areas.
Do you guys have a favorite show that you’ve played? Have you had any nightmare gigs yet?
Matt Carey: I’d say my favorite show was when we played Dayton Music Fest this past October. We started the night off playing at Oregon Express in front of a huge crowd and then got to enjoy all the other acts that were playing throughout the night.
I think as far as the nightmare shows go, we’ve all had our moments where we may have messed up or not played as well as we wanted to. But I don’t think there’s a defining nightmare show or anything, because you can always find a positive out of every show.
What is the best compliment you’ve ever received about the band?

Alec Snead: The best compliment we’ve received probably came from the guys in Motel Beds at Dayton Music Fest. After a really fun opening set at Oregon Express, we floated around for the rest of the night and ended up at Bob’s, where Motel Beds was closing the fest to a packed house. They gave us a shouto ut for starting the night off on the right foot and that means a lot coming from guys we’ve listened to for a long time.
I know you guys had planned to try and get to South By Southwest in Austin, Texas, this year. Did you make it down there?
Alec Snead: We didn’t make it down this year, but it’s definitely still on our agenda for the future. There’s obviously a lot of great music down there and it’s really cool to see bands we play with up here making the trip and showing Austin what Dayton is all about.
Do you have a lot of Spring and Summer dates lined up?
Joey Beach: We’re gonna be pretty busy this year. We’re booking into the summer at this point, but closest on the horizon is the show at Garden Station on April 11 with the Zygotes and Speaking Suns. I think it’ll be a cool and unique show. It’s also gonna be one of Speaking Suns’ last shows for the foreseeable future, so you can bet they’ll bring their A game.
We’re doing a residency at Jimmie’s Ladder 11 in May as well, playing free shows every Monday night with some good friends that’ll surely be a good time.
Other than that, the goal is to maintain a full schedule through the summer with the album release sometime in July.
What are your loftiest goals for the band?
Matt Carey: We want to take it as far as we can. All three of us are extremely devoted to this and we love being able to express our creativity through our own music. I think we would love being able to play shows every night, going on month long tours, and continuing to create music in our free time, or better, for a living.
Being in a band is no simple task by any means, so that’s easier said than done. But there’s a reason we love doing it, and that motivation is enough for us to keep working hard so we can reach that goal. Overall, we just want to be happy with ourselves and our music and to always keep it fun.
(Visit Manray at www.facebook.com/daytonmanray.)