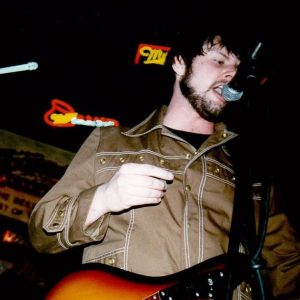 For those who don’t know this, Ghettoblaster is currently calling its home base Dayton, Ohio.  And it is a sad day here.  A staple of the music community, and longtime friend to deceased Brainiac mastermind Timmy Taylor passed away today.
Jeremy Frederick, who has long been a critical part of the Dayton music scene (Lazy, Cigarhead, Let’s Crash, Human Reunion), died in his sleep this morning. As significant as his contributions to music were, perhaps more important were Jeremy’s sense of humor, pride for his hometown, and willingness to openly celebrate and acknowledge the success of his peers and his appreciation for their art and efforts (which I witnessed as recently as this Tuesday).
Several years back I interviewed his band Human Reunion for a feature in Bettawreckonize on-line fanzine.  What he had to say about Dayton music held a lot of truth about our little community in its own profound and strange way.  Below is what he told me.  Rest in peace…
Me: As I’ve been going out more the last couple months, I’ve noticed that a lot of the Dayton bands don’t sound like other Dayton bands, and they don’t sound like any other band that I’ve heard really recently. I can’t pigeonhole them in my head as any one thing or sound….
Jeremy: Dayton has always been that way. It has always been unique. When I started going to shows in the late 80s, you’d have a band like Haunting Souls who were doing this politico stuff that was borderline-Slayer in terms of heaviness, and the band right after that would have two drum machines and the guy would be naked and wearing a Dominos pizza box and rapping about straight-edge shit. And yeah, there are rivalries and shit like that, and there’s all kinds of scandal like there’s supposed to be, but I think that Dayton….there has always been a great uniqueness here. If there was ever a real “Dayton sound” it was more of an undercurrent running beneath whatever was going on. It was an attitude. I describe the Dayton-music scene, well aside from the funk shit, which was in a school of its own too, I describe the Dayton rock premise as taking a bunch of ashtrays and someone yanks the sheet out to see what lands on the carpet. And someone gets mad, but then the guy who owns the house is mad at the guy for getting mad at the guy. That’s how Dayton is. I find myself disappointed when I go to other cities….it is like Austin Texas, “Wow.” New York, L.A. I’ve been taken to see whatever’s the greatest thing there, and people will say, “You’ll like these guys Jeremy, they’ve got a plastic robot on stage.” Well bands in Dayton may have costumes on, but they’re not wearing costumes. Even if you don’t like what is going on on stage it is probably pretty close to being real. It might be something that you really hate, but you can’t really hate anybody for too long in Dayton without being ridiculous, without being mixed in with the ashtrays. I’m glad you asked that question.