OGRE (aka Robin Ogden) and Dallas Campbell have composed and released a completely original score for the classic Night of the Living Dead, which pays homage to all those spooky synth wizards that have come before them including Goblin, Fabio Frizzi and Myrow and Seagrave. Though the 31-track album is available now for digital download via Lakeshore Records, it officially hits digital retailers on the 21st. In addition, Lakeshore will be streaming a re-scored version of the movie on their Youtube Channel on October 28, just in time for Halloween.
Ghettoblaster recently caught up with the duo to discuss the project. This is what they told us about it.
Do you remember the first time you saw Night of the Living Dead? If so, what impression did the score leave on you at that time?  Or was there even a score or was it stock music?
Dallas: I saw NOTLD pretty early on, maybe third gradish?  I grew up very near where the film was shot, and two of my elementary school teachers are actually zombies in the movie.  At that time, i probably didn’t even notice the score due to being terrified.  The original is mainly orchestral and a good bit of stock music.
Robin: I’m pretty sure I was in my teens, but I don’t think the importance of the film really hit me until I rewatched it later on at university. The film’s pretty timeless, partially I think because it was shot so well in black and white and partially because the social commentary’s as keen today as it was in the 1960s. It’s a very important film in so many ways.
And there definitely was a score of sorts! We had a hell of a game editing it out, and actually had to redo most of the sound design in the film where the score overlapped with dialogue and existing sound effects. In order to fit our new music in. I think they used a lot of stock library music for a lot of the scenes, but I could be wrong. They definitely used an oscillator in a few places though! I think I’m right in saying it’s actually got a proto-synth score in places, but was obviously hindered by the affordability and availability of synthesizers at the time, so there are these abstracted drones through tape delays. We tried to capture that vibe in a few cues.
Were horror movie soundtracks and soundtrack composers always a touchstone for you in terms of influence or was it something you discovered later in life?
Robin: I can remember the first time watching Carpenter flicks way before I knew what a synthesizer really was and wondering what the heck was making all of those cool sounds. Same for Kubrick’s The Shining really. I’ve a fairly classical background, so when I heard that music in the opening credits, which is Wendy Carlos’ take on Berlioz’ “Witches Sabbath” from Symphonie Fantastique, but completely synthesized, it was really creepy, a weird mix of familiar and wrong and completely awesome, or something. I think that’s one of the functions of horror music, that kind of uncanny thing that’s particularly suited to synthesizers. So I think horror soundtracks and composers have always been a pretty big influence, even if writing horror music’s only something I’ve really gotten into since I’ve known Dallas.
Dallas: I’d say Goblin first got me interested in soundtrack sort of music.  Mainly the score for Dawn of the Dead.  It wasn’t until i became totally obsessed and somewhat more knowledgeable about analog synthesizers that i actually attempted to start writing it myself.

How is it that you became acquainted?  What was your working relationship like?
Robin: Dallas reached out to me originally with a copy of his album Origin Seeds to check out, which I thought was mind blowingly cool. We moved in similar circles on Facebook, places like Synthetix.FM and we got to know each other. We have a really similar outlook on music, and a shared passion for hardware synthesizers. I think it really helps we have complementary musical styles given that we live the best part of 4,000 miles apart. But yeah, Dallas is the best to work with. Making music in a vacuum can be tricky, so having someone to bounce ideas around with is very inspiring.
Dallas: Robin and I became acquainted through social media and music group, etc.  We had both started a collaboration with another artist who was too busy to continue, so Robin suggested he and I do the 2001: A Space Odyssey project.  Working with Robin is inspiring and highly enjoyable.  He’s a seriously talented guy! Anytime I’m having trouble with a scene or something, he’s always got a great idea.   For the movie rescores, Robin cut up the film and we just started working scene by scene.  Some scenes are just one of us, but most are collaborations.  Robin actually did much of the sound design on our rescore as well.
Where did the concept for this endeavor come from?
Dallas: Robin and I had just finished recording our rescore of 2001 and we wanted to do something that we could actually show people the movie with our music without and legal issues.  NOTLD just made total sense to us.  I think we started writing pretty much straight away after that.
Robin: It came off the back of our previous two projects together, our horror soundtrack for a film that doesn’t exist called All Hallows’, and our rescore of Kubrick’s 2001. It’s kind of a perfect fusion of both of those releases in a way, and distills a lot of the ideas we’ve explored with them.
How many times did you watch the movie during this project?
Dallas: Oh man, i don’t even know.  We write everything to the scene.  So, at least for me, I always have the film going while I’m writing and recording.
Robin: Countless times! Everything’s locked to picture, so every time you hit record you’re watching a scene!
What has been the most rewarding aspect of this collaboration?  Is this something that you might do together again?
Robin: Well, we’re already working on some more projects together, so most definitely! The rewarding part is probably the creative process for us. We do a lot of experimentation with things like tape loops and using gear in weird ways, and I think we push each other creatively. But watching the film back once everything’s done and dusted is a super cool thing!
Dallas: Working with Robin is amazing.  He always comes up with some crazy ways to make really cool original sounds.  He’s becoming a tape loop master.  It a lot of fun playing off of each other once we get a vibe going on a project.  We already have multiple projects in the works right now, and don’t really have and plans to stop. 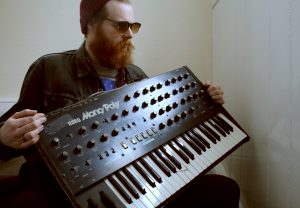 What kind of experience are you hoping people will have as a result of your efforts?
Robin: Hopefully people will look at the film in a slightly new light, or consider some things in it slightly differently. There are a few motifs we try to use to tie everything together. Rescoring is an interesting thing. Our main goal with projects like this is to try and use music to highlight readings of the film a viewer might not usually think about. Hopefully we’ve managed to do something cool!
Dallas: It would be cool for people to rewatch NOTLD with fresh eyes if they haven’t seen it in some time, because it’s a great film that’s really very relevant today.
When will this be available to the public and in what formats?
Robin: Night Of The Living Dead (Original Motion Picture Rescore) is out now on Lakeshore Record’s Bandcamp page ( https://lakeshorerecords.bandcamp.com/album/night-of-the-living-dead-original-motion-picture-rescore ), and will be having a wider digital release on the 21st of October on iTunes etc.!
Lakeshore will be streaming the full film with the new score on the 28th October on their Youtube Channel ( https://www.youtube.com/c/lakeshorerecords ), just in time for Halloween!
Are there any plans to perform this alongside the movie in public?
Dallas: No plans yet, Robin and I haven’t met in person! But, it’s not out of the question!
(More information is available here: https://ogresound.bandcamp.com/album/all-hallows
https://telefuturenow.bandcamp.com/album/beyond-the-infinite
https://lakeshorerecords.bandcamp.com/album/night-of-the-living-dead-original-motion-picture-rescore)