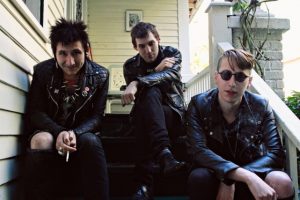 Efforts to pigeonhole Cult of Youth, the project of Brooklyn New York’s Sean Ragon, into a specific genre or nail down influence are exercises in futility.  Some will call it pagan neofolk, others post-punk or post-industrial, and some will site Miles Davis, The Pogues, Nick Cave and Velvet Underground as influences.  When asked for a clarifier, Ragon isn’t even wholly certain where CoY’s sound comes from.
“When I get influenced by something, the end result of what I write is usually so far from that thing,” Ragon explained.  “An idea spawns another idea, which leads to something else entirely.  The original concept is usually so far removed from the end result that I’m not entirely sure if I can see it.”
Though specific influences aren’t clear, to even Ragon, what is clear is that what once started as Ragon’s lo-fi bedroom recording project, has quickly graduated to intense hi-fi recordings with deep roots.
“I’ve had a lot of problems in my life and have gone through a lot of bad times and I think that using music as an outlet was the only real positive thing that I had going for me because I had so many negative outlets,” Ragon explained about drug and alcohol addictions he’s since overcome.  “Being sober today for me is the easiest thing in the world.  It means I’m sharper and smarter than other people in the room, and more capable of performing.
“I own a record store, run a record label (Blind Prophet Records) and have a band, so I have a lot of things occupying my time,” Ragon added.  “I’m too busy working towards something that is positive and ultimately worth doing to worry about ‘partying, which is just shallow.  These are the positive contributions that I may making to the world…so I can say actually did something with my life.”
As Ragon describes CoY’s latest, Love Will Prevail, it is crystal clear that this was his labor of love, as well as his personal crowning achievement.  Though the record features contributions from Glenn Maryansky on drums and Christiana Key on violin, as well as percussion and female vocals from former Battletorn vocalist Beverly Hames, Ragon played 80 percent of the record, and almost every instrument on the album, including trombone.  And he did it in the studio he built from scratch in his new Heaven Street record store location in Brooklyn New York.
“In the early days of the band I was playing every instrument,” Ragon explained.  “There was a feeling of spontaneity there, like it was being recorded while it was being written.  When things are practiced to death, when you get to the studio it sounds rehearsed.  I always felt like something was lost that way.  This record has a professional sound, but without having the quality suffer because I was able to take my time with it.”
The detail with which Ragon labels the selection of LPs and 7”s at Heaven Street – with white labels providing insightful facts about the bands or reflections about the albums he offers for sale – comes from the same deep D.I.Y. ethos and passion for the end product that inspired him to engineer the recording of the album and master it himself.  Simply, Love Will Prevail is a majestic, strangely optimistic and idealistic record that reveals an artist with surgical focus driven by a deep love for writing and recording.
“Writing music and recording is my favorite thing in the entire world,” Ragon beamed.  “And I’m really happy with the way this thing turned out.”