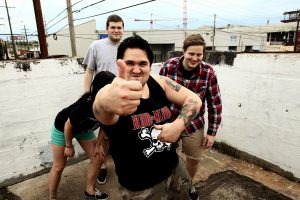 If Midwestern punk circles aren’t buzzing over Cincinnati pop punk band Mixtapes’ debut full-length, Even On The Worst Nights (which was released June 26 via No Sleep), shame on them. Mixtapes’ unique style of witty pop-punk has taken the underground by storm over the last several months and with EotWN I expect the Cincy four piece’s popularity to skyrocket. Not only are the band’s songs heartfelt, but the humorous onstage banter is worth the price of admission alone. Ghettoblaster caught up with Mixtapes vocalist/guitarist Ryan Rockwell to ask him about his online haters, the new record, Hot Water Music, and Cincinnati chili. Here’s what he told us…
So there has been some debate online as to whether you guys suck at guitar.  Care to set the record straight?
I can. I am not very good at guitar, but I’m also the best guitar player of all time.
Any chance we could get a YouTube video of the guitar solo from Blue Oyster Cult’s “Don’t Fear The Reaper”?
Yes!
You’ve taken issue on your Facebook page with some folks calling you a “funny” band, but there is a definite sense of humor that exists in your live performance.  Do you ever feel like Robin Williams trying to do a serious acting role with your more serious material?
Ha, ha, no it’s not really that. I never claimed that I was always a serious person, and live we definitely aren’t a quiet or serious band. But, every song we write isn’t funny. Honestly, most of them are somewhat depressing. Best of both worlds? 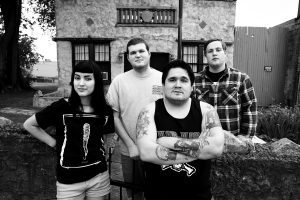 Are there underlying themes on Even On The Worst Nights that tie the content of the record together?
I would say so, yes. With it being our first album, I think we kind of took the themes of everything and added some things and in my opinion it worked out awesome. I would say Even On The Worst Nights is a record about dealing with death, loss and things around you falling apart and then figuring out the people and things that make life seem all the more bearable.
What were the circumstances of your worst night as a part of Mixtapes?
Any time that we are in New Jersey.
To what does Mixtapes attribute its popularity?
Honestly, just all the work we put into of making ourselves look good.

Have you seen the benefits of migrating to a larger label pay off in the way your records are handled and in the execution of your tours?
The record just came out, so it isn’t all so much different. But, the name and size of the label help a lot and Chris (Hansen, No Sleep Records) really cares about his label and does an awesome job. He’s also friends with Matt (Medina, Animal Style Recors) who runs our old label and is also the best person ever so it’s made everything really easy.
You guys recently covered Hot Water Music’s “Trusty Chords.”  What is it about that band that has had an impact on you that resonates still?
Just good songs I would say. We just did that for fun at the last minute, but it’s a classic song and they have quite a few of those. I feel like Hot Water Music is also kind of like the Bouncing Souls, a respected band because they deserve it. 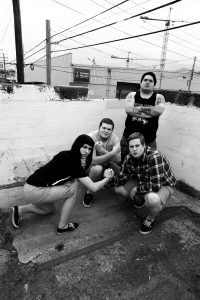 You’ve recently played Galaxy CDs with Into It. Over It. and Xerxes, and neither band is really in your wheel house.  How important is it to have diversity on an all ages bill?
I think it’s awesome. I don’t think it’s necessarily super important, but I do think it’s awesome. We just like to play music and will pretty much play with whomever unless they are just the worst people ever. I would like to imagine other bands in this little scene all feel the same way.
You guys have spent significant time touring over the last couple years. What are the rituals you have that keeps you sane on the road?
Honestly I try to eat every single day.
Do you miss Cincinnati-style chili when you’re away from home or is it overrated?
That’s hard to say because it depends on personal taste I suppose. I am not a chili snob. I love Cincinnati chili, but I also love chili from all over from, and from red to green. Cincinnati chili is for sure unique, but I think it’s pretty great!
How do you feel about fellow Cincinnatians Pete Rose and Nick Lachey?
I hear Pete Rose was an asshole, but Nick is cute.
How tired are you of hearing, “Your guitar player is hot!”  What is your typical response to this?
Why would I ever get tired of people telling me that I’m hot?
(Check out the band at one of the following dates:
June 27 – Philadelphia, PA – The Fire
June 28 – Brooklyn, NY – Suburbia (Friendship Fest w/Everyone Everywhere, You Blew It, Man the Change)
June 29 – Richmond, VA – House Show
June 30 – Durham, NC – Motorco (DTFH 2 w/Dopamines, Mikey Erg, Elway, Fake Boys)
July 7 – Long Island, NY – Ollies Point (Todays Mixtape Fest))