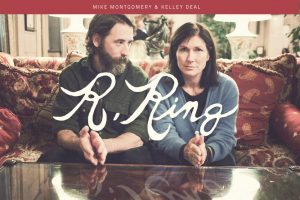 We will be in Europe during the sxsw timeframe and when we return the Breeders will be gearing up to hit the road, so I’m not really sure what the rest of the year looks like for R.RING.   Thanks so much for taking the time to do this! -MM
Are you still working with the guys in Ampline Mike?
We are indeed still a band and are playing Feb. 21 at Blind Bob’s.  We’ll have a new split 7” with surf weirdos Daikaiju in tow. –MM
Kelley, how did the Breeders collaboration with Buffy come about all those years ago?
Sigh, Buffy…  The Breeders were big fans of the show and we learned the theme song and played it live and even recorded it as a b-side. I think someone associated with the show discovered that and invited us to be the musical guest. Yay! –KD
Can we expect another knitting book in the future?
I am planning on creating one-off patterns of designs I feel I MUST share with knitters but no plans for an entire book. Thanks for asking! -KD
( For more information, visit http://www.rringband.com.)