Incorporating elements of ambient, dream-pop, shoegaze and a buttload of other genre’s, New York’s Dead Leaf Echo run the gamut of underground aural possibilities to produce blossoming, genre-bending music that has left them at the forefront of NYC’s art-rock scene.  Working with famed production heavies like John Fyer (Cocteau Twins, This Mortal Coil), rubbing elbows with original Psychedelic Furs guitar player John Aston, and playing sold out shows with Chapterhouse, Ulrich Schnauss, and A Place To Bury Strangers, the trio have birthed a shimmering sound that mixes seamlessly with their aesthetic and high-art concepts.  Ghettoblaster recently touched base with Lg Galleon to discuss the band’s influences, forthcoming releases and growing fanbase.
How has your career evolved over the last several years?  Are you finding it more or less difficult to find a receptive audience?
It’s a full mountain range of many levels and relationships.  Artistic levels, financial levels and interpersonal relationships.  For me it has to be about a personal fulfillment on an artistic level.  If I don’t feel that it’s being pushed or taken to where it should be which is above par with anything else out there then the evolution stops and so does this project.  That also plays out as one of many factors into how and why certain things take so long (others being financial, scheduling and placement) I find it less difficult to find an audience as that audience has continued to grow both nationally and internationally over the course of the past few years.  The second we stop climbing this mountain is when we let go.  Many times you feel like you’re in a holding pattern waiting for life to work through its web but let patience and determination work in your favor. For me very little of this band is playing.  Perhaps that’s why we’ve managed to keep it special, so that when we are playing live it’s something other than the normal day to day of booking, scheduling, designing, driving, transporting, networking, auditioning, promoting, curating etc., etc. and even then when dealing with some of the smaller clubs you have to fight against the sound that you want to deliver and the sound that the club ‘thinks’ that you should have.  Then you can have a show that doesn’t live up to your expectations or that you felt uncomfortable with.  Then you’re not having fun and your asking yourself why am I doing this?  Why am I putting up with this day in and day out. I could be at home reading a book expanding my mind or even better at a party and destroying it. Still.
I’ve gotten a chance to work with some of my heroes and people that I really respect in the music.  But I feel like with some of them we’ve only really scratched the surface.  I’d prefer a situation where we could really open up in the studio and experiment on a more long form platform. Diving down deeper into a working relationship if very tricky but can produce amazing results.  Ultimately it’s about you. When at the end of the day you brought something new and creative that had no existence prior can be the most satisfying feeling as long as you can live with your creations.
In the past few years we have had a chance to work with Ulrich Schnauss, Mark Van Hoen, John Fryer but overall we’ve spent very little time with them in the long run of things.  You have to move quick and be ready for such things when they go down. It can be quite a change in style and what you find in yourself to bring to the table on a musical level.
Do you think the popularity of other bands that are also reminiscent of 80s and 90s shoegaze and new wave sounds, i.e. M83, and older bands reuniting for new material, i.e. Dead Can Dance, have made audiences more receptive to your artistic direction?
Actually this was the subject of our college thesis. Joking of course we’re all pre-med undergrads. Regarding the 80s, 90s. The musical climate has changed since those days.  College and Indie scenes climbed very high ground onto larger platform within the mainstream media then.  Bad Pop music and a changing digitized industry is what drove it back underground only now it’s not so much of an underground is it?  Not when all you need now is a phone and email.  Possible artists aren’t so hidden with every single person that has some semblance of a musical sketch unsolicited across your radar every time you flip on the screen.  Having bands like u mentioned above can only help.  Whether it’s rising or reuniting it brings a new or revived feeling that hopefully will spread to ears that aren’t so stuck in a mainstream rut.
Who are the modern artists that you follow and appreciate for their brave or exciting work?
We live with one foot in the past and one foot in the future and in the middle there’s the bravest of them all and they are called “The Bravery.”  Not the group but the small band of musical foot soldiers around the world that I call friends but have no idea that I refer to them as such because I usually call them Skabba the Hut. 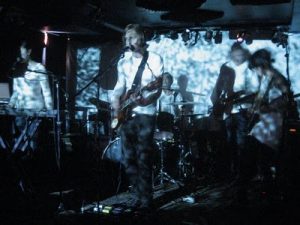