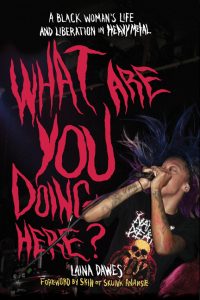 Though metal has traditionally been a rigidly white and male dominated universe, it spoke loudly to a young Laina Dawes.  In her groundbreaking heavy metal memoir, “WHAT ARE YOU DOING HERE? A Black Woman’s Life and Liberation in Heavy Metal,” Dawes chronicles the good, bad and ugly sides of being a black woman navigating the metal and punk scenes, and challenges the assumptions and prejudices related to that journey.
Ghettoblaster recently spoke with Dawes about her groundbreaking memoir and experiences with punk and metal.  This is what she told us…

Tags: Bazillion Points Publishing, Laina Dawes, What Are You Doing Here? A Black Woman's Life and Liberation in Heavy Metal