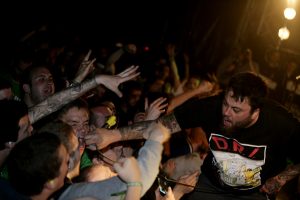 When 1981 Clothing announced the lineup for this year’s Bringin’ It Back For The Kids Fest 2, my eyes went immediately to one listing on the lineup: Morning Again.  Not only because of the significant impact the band had on the ‘90s hardcore scene, but because I know those dudes (my brother was briefly a vocalist in a band with Morning Again’s Kevin Byers, and I was in In The Black Hearts of Men with drummer Matt Thomas).  Naturally, we felt like it was important to catch up with Byers about the reunion performance before he headed to Rocketown in Ft. Lauderdale, Florida for the festival on October 12 and 13.  Here is what he told Ghettoblaster about Morning Again’s breakup and legacy, this performance, and the possibility of future recordings and tours….
What year did Morning Again originally call it quits and what were the circumstances?
I think it was fall of ’98.  We were on tour in Europe. Things were seeming great.  Sold out shows almost every night.  It was awesome.  Part way into tour our guitar player John decided to tell us that this was going to be his last tour.  He was wanting to concentrate on his label Eulogy.  Needless to say, spirits went on a downward spiral and by the end of tour we were all at each other’s throats and decided to call it quits.
Which of the Morning Again albums were you involved in writing?
I was on all but the Hand of Hope 7” in and The Cleanest War.  It was definitely a group effort, but john was very Instrumental in the song writing had a very clear vision of what he wanted the band to do and sound like.  It worked out pretty good I think.
What is it about Morning Again’s music that has allowed it to stand the test of time?
To this day I am very surprised people are still interested in the band.  I don’t know.  Maybe because we don’t have any gimmicks or any smoke and mirror shit.  We just wrote straight-to-the-point, metal-influenced hardcore and sang about real issues; issues that are still going on today.  So these songs, even though written over 12 years ago are still relevant to what is happening in this world today.  So I guess people can still relate to songs with feeling behind them and some insight something to make you think.  I don’t think there is too much music like that anymore, just music to just sit back and listen to not to really take in and take to heart.
When were you approached about doing this festival?
We were approached about four months ago.  Our old friends were planning on doing a fest and wanted us to be a part of it.  Since our first Florida reunion was a hit, we definitely wanted to go back and do it all over again.
Are there other bands playing that you are particularly stoked about seeing or hanging with?
Remembering Never definitely.  I’ll just be happy to see my South Florida friends and enjoy a good ole hardcore show.
What are you and the rest of the guys doing these days when not playing with Morning Again?
I am a tattooer ,John owns a label and two tattoo shops in Florida, Steve is in L.A and still manages bands and guitar techs.  Jerry moved to Brooklyn and went to film school, and Matt does whatever Matt does.  Ha ha.
Have you ever given anyone a Morning Again tattoo?
I have done a few MA tattoos.  I have had many request from kids all over the world wanting me to design MA tattoos for them to get.  It’s crazy. Ha ha.
Have you ever considered writing new material together?
We are definitely considering writing maybe a new 7”, maybe three songs.  We will talk about that and the future of Morning Again when we go down for the fest next week.
When is the next show?
We are wanting to do Japan and South America next.  I was approached about another Euro tour, so we will talk about that also next week.  I am grateful for the opportunities this band has given me and hope to continue to enough playing some meaningful hardcore with some good friends.
(Here is the complete lineup for the fest:
Friday
Destro
Harness
Into the Moat (reunion)
Knock Em Dead
Know the Score
Low Point
Morning Again (reunion)
Nebraska Bricks
Remembering Never
Set Free
Sleep Patterns
Strengthen What Remains
Throne of Rats
Where Fear and Weapons Meet (reunion)
Xibalba
One To Blame
Homestretch
Nervous Breakdown karaoke
Saturday
Abiotic
Backtrack
Born Low
The Chariot
Fero Lux
Fire and Ice
Float Face Down
For Today
Hundredth
Impending Doom
Lions Lions
Naysayer
Old Habits
Omissions
Out Crowd
Reveal Renew
Texas in July
Thick as Blood
Trapped Under Ice
Turnstile
For more information and to purchase tickets, visit:
www.districtlines.com/bringin-It-Back-for-the-Kids-Fest)