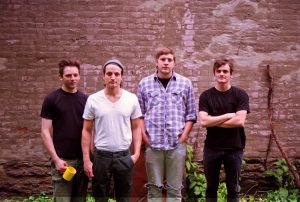 Cincinnati, Ohio’s Pomegranates create mesmerizing alt-pop compositions. Formed in Cincinnati, Ohio in 2006, the young indie band quickly distinguished itself from the indie rock pack, earning acclaim from My Old Kentucky Blog (“Sweet, sweet sounds are pop honey to my ears”), massive support from WOXY.com and invitations to tour from bands such as French Kicks, Islands and Jimmy Eat World. Pomegranates’ 2008 full-length debut, Everything Is Alive, was hailed as “shimmering” by Spin, which noted: “the 11-track collection shows a youthful, open-eared quartet enlivened with a kick-ass record collection, ceiling-less imagination, ragged guitars, and songwriting chops for days.”

Earlier this Summer, they released Heaven, an album that they recorded with Miguel Urbitztondo (Daniel Johnston, Sparklehorse), and they’ve been on a brief tour with Hounds Below this week. The tour culminates with a performance at Southgate House Revival in Newport, KY, on November 19 (congrats to the winner of our contest for tickets).
Ghettoblaster caught up with Pomegranates drummer Jacob Merritt to ask him a few questions about the band and their latest effort.  Here is what he told us.
Has creating pop music always been your foremost artistic passion?
I think collectively yes… Joey has been doing a lot of great drawings/comics lately (jjjoeycook.tumblr.com)
What is the creative process for writing music like in the Pomegranates?
We don’t have a set formula… Often we just start with a beat or little guitar part and build out. Lately Isaac and Joey have been bringing more ideas to the table that we then hash out as a group.
WOXY was one of the first radio stations that really embraced Pomegranates, right?  Are you still mourning that loss?  Do you credit them in part for raising the initial visibility of the band?
WOXY was invaluable for us. We miss them a ton. One of the biggest losses to come out of the current attitude and climate of the music industry.
The last two albums were done with TJ Lipple (MGMT, Aloha), correct?  Under what circumstances did you chose Miguel Urbitztondo for production on Heaven?

That is correct. TJ did still master this album as well. We had a great experience at Sound of Music for our first album, Everything is Alive, and wanted to get back to our beginnings a bit. And yeah Sound of Music has a great vibe and heritage.
Was it intimidating to work with someone whose worked with rock and indie staples like Daniel Johnston and Sparklehorse?
Nah. Miguel has been a friend of ours for a long time. You won’t regret hanging with him if your band is looking for somewhere to record. We also brought our friend Chad Wahlbrink along, who is a genius. He did all the engineering and mixing for Heaven. (Chadwahlbrink.com had lots of tunes to check out).
There has been kind of a rotating door in the bass department for you guys…was this Curt Kiser’s first album with the band?  What does he bring to the table that meshes so well with what Pomegranates is trying to accomplish?
Curt has been a friend for years. He is a really solid guitar player who really understands what we are trying to do musically and philosophically. We have been thankful to write with some great guys over the years. Curt actually plays bass less than Isaac or Joey (I just play drums).
Have you spent most of the last few months touring in support of Heaven?  If so, what have been the highlights?
Seeing good friends all over the country.
Do you believe in Heaven in the Judeo-Christian sense of the concept?
More or less. Haha. I think it’s hard for us to really understand what Heaven will be like until it happens.
You began a short tour this week, right?  Which stop are you most excited about and why?
Cincinnati. We love playing our hometown, and are excited to see the new Southgate House space.
How has the city of Cincinnati and the music scene there encourage, embraced or inspired the band?
We have great fans in Cincinnati. At the end of the day, knowing people are affected by what we do is the reason we are motivated to keep pushing through hard times.
Can you tell me a little bit about the Healing Power Kickstarter campaign?  Have you used this option to raise money for records before?
Not before Heaven. We are doing it for the next record as well… It’s cool seeing people support what we are trying to do.
What is your favorite Pomegranate (the fruit) product?  Jelly, wine, juice, or just the straight up fruit?
Juice!