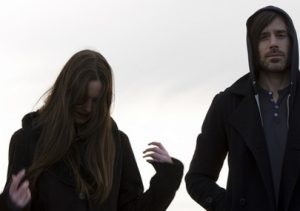 Sometimes the best marriages come from happenstance; a chance occurrence or happy accident that becomes something greater.
“Our friends Russian Circles were going to be playing in town and they were trying to find an opening band for a three-band bill,” Greg Burns, bassist and synth player for Marriages, said.  “They reached out to Red Sparowes and The Nocturnes, Emma’s other band, about playing a show, but neither band was able to do it.  So we wrote back and said, ‘We’d love to play with you guys and we’ll come up with something in order to do the shows.‘  In the process of doing that, we found that we were tapping in to something really fulfilling and that it was something we’d like to continue.
“Over the course of Red Sparowes, Emma (Ruth Rundle, vocalist and guitarist) and I had developed a musical relationship where we were able to be productive, but were also exploring a lot of ideas that didn’t really fit well with Red Sparowes.  Marriages has been a really good vehicle for that,” Burns added.  “Everything converged in a way that felt like it was too good to not follow up on.”
During preparations for the November 2011 show with Russian Circles, Burns and Rundle called in drummer Dave Clifford (Red Sparowes, Pleasure Forever) and the trio completed the material that would become their first record, Kitsune.  By the end of their first show, Sargent House offered to put out the record.
Borrowing its title from the Japanese word for fox, in Japanese folklore Kitsune possessed magical abilities that increase with their age and wisdom — an apropos title for the debut from the seasoned skillful trio. Recorded with Toshi Kasai (The Melvins, Tool), Kitsune is a dense and moody, dynamic rock ecord that draws from experimental, kraut-rock, psyche and goth influences.
“What we are trying to avoid is being pigeonholed or ever feeling like we have to do one particular thing.  That’s really important to us,” Burns said. “We are already working on the new record, and recently recorded a bonus track for the Japanese version of Kitsune that doesn’t really sound like anything else on the record.”
While the band are still participants in Red Sparowes, which according to Burns is on a bit of a hiatus, they don’t consider Marriages a side-project.
“We are really lucky that Sargent House wanted to get involved and that we had friends in bands who were supportive,” Burns added. “Our plans are to pursue this full-time and stay pretty dedicated to it.  We hope to do at least one record a year or more.”