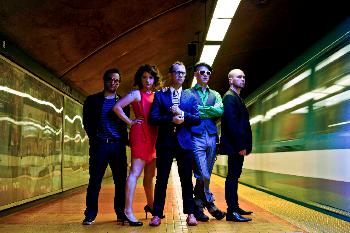 Stars are lovers not fighters.  And operating under the KISS principle (keep it simple stupid) when it comes to the ingredients of a compelling pop song, Stars’ narratives have long told stories of love, beauty, relationships while the music soars with sweeping bombast.  Remarkably, the band manages to sound fresh despite the fact that their sound has rarely veered ofcourse.  Being young, free and in love is timelessly sentimental, and few others craft a sound as woozy, warm and relatable as this Montreal-based band.
Though the quintet, who share members with Broken Social Scene, have yet to become a staple in popular music, they have managed to capture the attention of indie rock critics internationally, and collect nominations for some of Canada’s most prestigious music awards.  Whether The North, which the band released September 4 via ATO Records becomes their mainstream crossover effort remains to be seen.  Though Evan Cranley, the main composer of Stars music alongside childhood friend Chris Seligman, admits it would be nice to garner some recognition, the band’s mission continues to be simply the pursuit of the perfect pop song.
Ghettoblaster caught up with Cranley as the band prepared for their first tour in support of The North, which includes a stop at Cincinnati, Ohio’s 20th Century Theatre on October 3, discussing his favorite of the band’s output, balancing family with hours in the studio and being the Susan Lucci of indie pop.
Over the years Stars have been known to swap members with Broken Social Scene, Amy (Milan) has done here own solo-albums and Torquil (Campbell) has had side projects too.  What is it about Stars that makes it unique and special in its own right?
We are musicians and performers first. And Stars is the home where can obsessively deconstruct the meaning of the pop song.
Which of the band’s previous albums do you have the strongest personal connection to and why?
Its a tie between Heart and The North.  Heart, for its collective squalidness. And The North for the growth of the five of us as people. If I was to put these two records back to back, I’d be proud of the journey between the two.
Which do you think fans relate best to?
Love, loss and a good chorus.
For In Our Bedroom After the War you made the album available in digital form early to avoid leaks.  What have you done to safeguard The North?
We’ve always tried to be creative with how we release our music. Take Sad Robots for instance as well Bedroom.  But, for this latest release we’ve streamed certain cuts for free . We’re really trying to make the music speak for itself.
The band’s relationship with ATO is relatively new, correct?  Why the move away from self-releasing and to that new label?
I’ve always avoided talking about the band/label relationship in interviews as the details are, well, no one’s business essentially.  We continue to have our own imprint in Canada, Soft Revolution. It’s nice to be a part of your own creation.
How much pre-writing and rehearsing did you do before recording The North?
Chris Seligman and myself started pre-writing in January 2010. In his bedroom.  Then Patty McGee joined in that March.  And of course Torq and Amy shortly after that.  Demo-ing and scoring melodies is incredibly important to what happens before everyone records together. This usually starts in the dead of winter. We thrive in the dark, cold confines of Montreal
What is it about The North that provides commonality between this and earlier output?  How is it most drastically different?
On a chemical level. It’s never changed. The five of us have our dynamic and that’s the way it is. It continues to be a very collective process. What’s changed is our personal lives, balancing family and hours in the studio.  Can I push the sonics, texture and songwriting to the limit and still be up at 6:30am and still be a good father?  Ofcourse I can! Ha!
With six full-lengths under your belts I imagine that it gets difficult to decide what to play for live outings.  What is the modus operandi behind the setlist for the upcoming tour?
There is always an argument. Believe me!  We absolutely change the set list tour to tour.
And we’ve always tried to show the audience our body of work.
You have received Juno and Polaris Music Prize nominations for past records, but I’m not sure you’ve taken one yet.  Is 2012 the year?  Does this kind of thing ever matter to you as artists?
It’s funny, I used to not give a shit about nominations and prizes. but in this last year, as we get older, I think some recognition would be nice. Money is nice. Cash and prizes of any sort really.  How ‘bout a luxury vacation? Torquil has always called us the Susan Lucci of indie pop!
Which of the upcoming tour stops are you most excited about?
Would you believe me if I said “The Natty”?
(Catch Stars at one of these upcoming shows:
10/2 – Louisville, KY – Headliners Music Hall ^
10/3 – Cincinnati, OH – 20th Century Theatre ^
10/4 – Indianapolis, IN – Deluxe @ Old National Centre ^
10/5 – St. Louis, MO – Plush ^
10/6 – Columbia, MO – The Blue Note ^
10/9 – Lawrence, KS – The Bottleneck ^
10/10 – Tulsa, OK – Cain’s Ballroom ^
10/11 – Little Rock, AR – Revolution Music Room ^
10/12 – Houston, TX – Fitzgerald’s Upstairs ^
10/13 – Dallas, TX – Granada Theatre ^
10/14 – Austin, TX – Austin City Limits *
10/17 – San Diego, CA – House of Blues ^
10/18 – Los Angeles, CA – Mayan Theater ^
10/19 – Santa Cruz, CA – Rio Theatre ^
10/20 – San Francisco, CA – The Fillmore ^
11/7 – Portland, OR – The Aladdin Theatre
11/8 – Seattle, WA – The Showbox
11/9 – Victoria, BC – Save on Centre # *
11/10 – Vancouver, BC – Rogers Arena #  *
11/12 – Kelowna, BC – Prospera Place # *
11/14 – Calgary, AB – Stampede Corral # *
11/15 – Edmonton, AB  – Rexall Place # *
11/17 – Winnipeg, MB – MTS Centre # *
11/19 – London, ON – John Labatt Centre #  *
11/23  – Kingston, ON –  K-Rock Centre # *
11/24 – Toronto, ON – Air Canada Centre # *