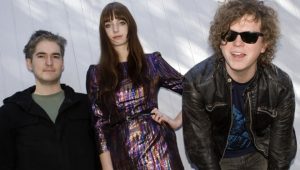 When some musicians grow up, they abandon teen angst and volume picking up those dusty acoustic guitars, trying desperately to channel Neil Young and Springsteen.  Others remain comfortable in their well worn Nirvana shirts, channeling age and experience into faster and louder mind-melting exploits.  The phenomenon that fits Ringo Deathstarr, a trio whose output nods to the fuzzy guitar flood of like-minded forefathers The Jesus and Mary Chain and My Bloody Valentine and injects it with youthful energy, is clearly the later.
What is currently causing the majority of angst for Ringo Deathstarr’s Elliott Frazier, as well as this aging journalist, is that the trio ‘s travels through Washington state have landed them in a cellular no-man’s land.  After no less than four disconnections, and a lot of awkward false starts, we managed to ask and answer some questions about the band’s new band album Mauve, which follows the wildly heralded Colour Trip, and dropped via Sonic Unyon Records on September 25.  He also happened to mention an affinity for Dayton’s Morella’s Forest, knowing people who are weirder than Billy Corgan, and some other stuff.  Here is what he told Ghettoblaster…
Today (September 25) is a pretty big day for you guys with the release of Mauve.  Do you anticipate that at this time next week you’ll be celebrating a place on the Billboard charts?
(Laughter) I don’t know.  I don’t really think about that kind of stuff.
I was surprised to see Dayton on the current routing on your itinerary rather than Toledo or Detroit, cities that love noisy, shoegazer stuff…
I’ve always wanted to play in Dayton.  Dayton’s got Kim and Kelly Deal.  There was also a band that I liked called Morella’s Forest.  That is one of the bands that got me into this kind of music.  I discovered them while I was living in Beaumont, Texas.  One of my friends had this Christian alternative music magazine and I found out about them that way.  They were my springboard to Starflyer 59, and ultimately, Sonic Youth.  Their music really set me off in this direction.
There is a picture on the cover for the “Rip” 7” with four dudes in it.  Who are those guys?
The brother of the guy from Club AC30 and his friends played a gig where they played a set as The Jesus and Mary Chain.  We thought it was funny.  A lot of people are confused.  That was the point.  People look at it and know that we sound like the Jesus and Mary Chain so they see a picture like this and get a kick out of it.  One of the guys in that picture looks like Pete Townsend.  It’s pretty weird. People ask, “Where’s Alex (Gehring)?  Is Alex out of the band?” (laughter).
What were the biggest differences you experienced in making this record vs. Colour Trip?
For Colour Trip we’d just gotten the deal from AC30 and we didn’t have any sort of budget originally and we didn’t have a lot of the songs ready.  AC30 gave us a budget and we went right from tour into the studio.  So it was pieced together in the studio.  We used a lot of sampling.  We had the songs ready to go for this record, had rehearsed them, and so we didn’t rely on near as much studio trickery.  For the most part it is straight up live.
A lot of the band’s press cites my Bloody Valentine as a major touchstone.  Who are your legitimate influences?
There’s Nirvana, Black Flag, Dinosaur Jr, stuff like that.  Most of the stuff that is popular now doesn’t excite me.  I try to stay in touch with the bands that I loved when I first started playing music.  I just want to get faster and louder.
This record definitely expresses frustration with the way music is today.  Every generation there are bands that reject popular music.  The same thing happened in the ‘70s and ‘80s.  People today think a band is a laptop today.
For us it is about the live show.  We want to get up there and play some crazy guitars and have fun.  When I go to a show I don’t want to think to hard about who someone sounds like, or compare them to anyone.  I want to see that they are having fun and that the crowd is having fun and that it sounds cool.
So you did the European leg of the Smashing Pumpkins tour recently.  Did you meet Billy Corgan and is he as tumultuous as the press makes him out to be?
He’s pretty nice.  He’s a weird guy, but I know people who are weirder than he is.  He was nice to us.  We talked about pedals, pre-amps, and other random crap…old jobs he used to have.  Relatively normal stuff.
Have you ever received any feedback from the fan behind the moniker (Ringo Starr) that he’s paid any attention to you guys?
He definitely knows that we exist.  We haven’t had a direct contact with him, but we have mutual friends with his granddaughter.  That’s about it (laughter)?
(Catch Ringo Deathstarr at one of these dates: