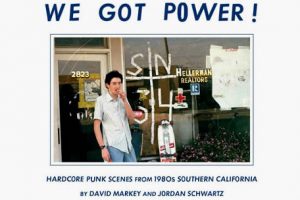 On October 5, Bazillion Points Publishing in Brooklyn released WE GOT POWER: Hardcore Punk Scenes From 1980s Southern California by David Markey and Jordan Schwartz.  And this book is a major history lesson; it contains all issues of classic SoCal punk zine WE GOT POWER, as well as essays by some people you may have heard of like Keith Morris, Henry Rollins and Pat Fear.  It also features almost 400 photos from the very beginning of SoCal hardcore punk.
Ghettoblaster recently caught up with the authors to ask a few questions about their roots, the original run of WE GOT POWER, and the book.  Here is what they told us…
When did you originally take notice of punk music?
David Markey: I first heard of punk from a childhood friend, Michele Norkon, who was raving about Iggy Pop to me in 1975 or ’76.  I would have been 12 at that point. It would take a few years for me to get into it.
JS: Around 1979 I was listening to more new wave and ska, and in 1980 I was turned on to the Decline of Western Civilization (part 1) sound track, Black Flag’s Jealous Again EP , and the Dead Kennedys Fresh Fruit for Rotting Vegetables and there was no turning back.
When was We Got Power zine’s original run and who was involved in the publication of that?
DM: Started in fall of 1981, went on through the end of 1983.  Alan Gilbert, Jordan Schwartz, Jennifer Schwartz, Kim Pilkington and myself were involved, along with a few other photographers like Ed Colver, Glenn E. Friedman, and Mouse.
Did you realize at the time that there was something going on that was crucial to document?
DM: That was the reason why we started the ‘zine.  To promote this amazing, exploding music scene that was completely being ignored by the mainstream.
Under what circumstances was this book inspired/conceived?
DM: The work began on it 8 years ago. Jordan and I had fortunately preserved our negatives and I bought a scanner and that process began. Half way into it we realized we had something special. It was around that time we first conceived the book.
JS: Thanks to the internet and social networking we were able to get in touch with the people in the photos and get them to tell us their stories.  We also used the internet to get in contact with Ian Christie at Bazillion Point, our publisher and editor, and to collaborate to create the book.
DM: Actually I contacted Ian from the Touch & Go Book I bought and asked him if he would be interested in putting our book out. I thought, well whoever would put Touch & Go out might be into We Got Power!, which was much more than just a fanzine re-production.
There have been a handful of previous books that covered this era before.  How does We Got Power differ from those?
DM: The photos are just different.  They have their own vibe.  The subjects are not just bands.  We captured the people, the environment.  I can’t think of a punk scene book from any era that I would compare this too.
JS: Also the book contains the complete five published issues of the magazine including the unreleased sixth issue.  There is a lot of humor running through the book, which is one of the things that helps it stand out from the others.
I imagine the intended audience of the book is people who were around during that era, as well as people who are much younger and missed the whole thing.  What are you hoping that both audiences take away from the book?
DM: I would hope that this would inspire young kids now to do something creative and totally their own.
JS: Hopefully it fills in some background information for the people wanting to find out about that time.  Since it was all underground it’s hard to get details.
Was it easy to get Morris, Rollins and Fear to participate in this project?  How critical was their involvement in the end product to you?
DS: It was a short list. Everyone we approached agreed to contribute. Some wanted direction, I told them write about whatever they wanted to from that era, but to just keep it to a personal, first-hand account. It worked out amazingly, as many of the essays seem to be talking to each other.
Was anything left on the “cutting room” floor here, or is the book pretty all-inclusive of your photos and documentation of the era?
DM: We worked from a thousand or two images, there were many that did not make the book.
(For more information about the book, visit: http://wegotpowerbook.com/.)