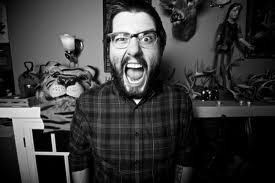 Into It. Over It.

Intersections, the latest LP from Into It. Over It., builds upon an impressive catalog spanning multiple LPs, and EPs delivered by prolific Chicago-based songwriter Evan Weiss. Long a collaborator and contributor to many different bands (including Pet Symmetry and Their/They’re/There), in 2007 Weiss began recording his own work under Into It. Over It. moniker.
His goals were ambitious from the start. The brutal sincerity in his lyrics and compositions, and the months upon years lived out of a van playing any basement and club that would have him have earned Weiss an incredible following of devout fans. Last Fall, Into It. Over It. and Triple Crown Records released the Intersections LP, which was recorded at the legendary Soma Electronic Music Studios by producer Brian Deck (Modest Mouse, Iron & Wine).
In support of the LP, Weiss has assembled a proper band is set to hit the road for a headlining tour that brings him through Ohio. This is what he told Ghettoblaster about performing, the new record, and the emo revival.
I caught one of your performances after Proper came out and was impressed by the amount of banter with the crowd and storytelling you did. Do you see yourself as a musician or storyteller first?
I’m a musician first. The storytelling evolved through years of performing solo. Performing alone is truly difficult and it takes time to hone a style and approach. My songs are so personal and about such specific circumstances, the storytelling kinda took on a life of its own. I’d play the songs and eventually someone would ask what some of them were about. I would start telling the stories and getting into more and more detail. It started happening so often that it just became part of the show.
There is a stigma to solo performers. It’s really a drag, but it’s really easy to be dismissed by an audience. The storytelling was my way of being able to connect and relate to the crowd. It became part of my approach.
Into It. Over It. spent some of the last year being a full blown rock band. Was that a result of needing a change to keep things interesting?
Well, I’ve done maybe 20 shows as a band in the last 12 months. They were the first 20 I’d ever done. In the grand scheme of things, that really isn’t that many. The full band shows was needed because that’s how the songs are intended to be. They are rock songs. I was touring solo out of need and not so much for want. It’s been rad seeing the band morph and finally being able to play these songs the way they have always been intended.
Will these be full-band shows, or you and a guitar or a mix of both?
It will be full band.
You’ve done some significant support tours recently, but do you experience additional anxiety getting ready for a headliner like you’re doing now?
Totally (laughter). Absolutely. I think if any band said otherwise, they’d be lying. It is a lot of pressure, especially considering that I’ve never done anything like this before. That’s part of it. You have to take the next step. I’m going to do my best to make sure that everyone has a good time. We are just hoping for the vibe to be right. So I’ve invited two bands that I really fucking like, and we all get along. Furthermore, all the local bands are people that we already know or are friends of ours so I think the vibe for every single show will be awesome.
Is it true that you wrote Intersections without using a guitar pick?  Was that a personal challenge that was stifling or did it open up doors of creativity that you hadn’t explored before?
It is true. It gave the record its own vibe. That was the intention. To write a record and not just songs. It was a personal challenge that, amongst other things, certainly improved my guitar playing and songwriting.
Was there a moment during the writing and recording of Intersections that was exceedingly gratifying in one way or another?
Between myself, Brian Deck, and Nick Wakim (who played the drums) it was a consistent theme to continue to challenge ourselves not just as musicians but what decisions were “right” or “wrong”…what felt natural and what didn’t. I think ultimately that was the most gratifying. We put in the time and truly pushed ourselves and it really shows.
With Into It. Over It. you’ve played with ‘90s emo imagery in your merchandise, so I have to ask you about the media revival phenomenon. What is your take on it?
Here’s my thing: I’m excited that journalists are excited to cover the bands that I’m in a community with. I think it is not an exclusive group. There’s nothing that says that the bands I associate with or other up-and-coming bands can’t be covered by anybody. I think it is awesome that people are taking notice and talking about myself and my peers.
But, I think that attaching a term to it may give it a negative connotation. It’s not necessarily a bad thing, but it isn’t what I would call it. Would I refer to it is as that? No, probably not. But, am I offended that other people are if they are talking about the music? No, I’m not. I’d much rather be called an emo band than a pop punk band. It is more applicable and accurate description for us.

Tags: Evan Weiss, Into It. Over It., Triple Crown Records