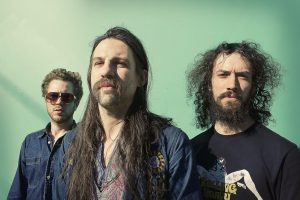 Signed to Relapse Records on the power of their demo, Philadelphia’s Ecstatic Vision conjure heavy and primal psychedelic influences that run a gamut of influences. From ‘70s heavy metal and psychedelia to Hawkwind and Can, and even early Amon Duul II, the trio has quickly become recognized as a force to be reckoned with, both for their freakout live performances, and for their intense debut, Sonic Praise, which was released in June. Recorded at various studios throughout Philadelphia, the acid-tinged debut is primitive and primal, but also heavily experimental.
Having already played numerous high-profile shows and tours, the band is currently in the midst of a national tour with Uncle Acid & The Deadbeats and stops through Dayton on their way home. Ghettoblaster recently spoke with Ecstatic Vision’s Doug Sabolik about his love for heavy music, touring and their myriad influences.
When did you realize that heavy music was your vessel for expressing yourself artistically?
I was always drawn to heavier music. One of my earliest memories is crate digging for Black Sabbath records with my grandmom. It’s just who I am.   I like danger in my music, although a lot of the really heavy stuff these days I’m not really into.
How did you and the other members of Ecstatic Vision come to find each other?
We have all played in bands together in the past. As you grow you figure out who has the true passion and hard work ethic to make a band happen for real. Luckily we all live in the same town, which affords us the opportunity to jam a lot and deliver consistently ripping live shows.
Is this a full-time gig or are you still working towards making music a career?
We still all work jobs back home. Playing in a band like ours is a hustle. You need to secure a job that lets you go away. Fortunately everyone in the band has the same goals and we all do what we have to in order to bring the show on the road because those moments on stage are priceless.
What does it look and feel like for you when you find you are connecting with an audience?
When people come out for us they want to have a good time and jam with us. When people are having a good time we generally feed off that energy and things can get pretty silly when that happens. There is nothing better than connecting with an audience.
You’ve received comparisons to UFO, Hawkwind, and Fela Kuti and Sun Ra? Do you feel like those are accurate?
Well the first two UFO albums, just to clarify that. I think elements of all those you listed pop their heads up throughout the album. UFO because of the heavy rock and 1971 rock production, Fela because of the long songs and broken English lyrics, and I assume Sun Ra because of some the wind instruments on the album. I wouldn’t call what we do free jazz at all, but you can hear pieces of that in our music.
Was there a grand vision for Sonic Praise and how did that come together?
The grand vision was somewhat achieved between our album and our live show. It was about making a trance inducing rock album with psychedelic world music influences and sounds. It seems to have connected with people, which is amazing. The current musical climate is pretty tame these days, and it’s refreshing to know that other people feel the same as we do because it’s always more fun to have some company.
What has working with Relapse done to raise the visibility or bar for the band?
Relapse has been an amazing label to us. They seemed to be fans of the music number one. Politics in the music industry turn me off and they seem to understand that and just mail me with good news here and there which I appreciate. They got our name out there fast and now we are on an amazing tour with Uncle Acid & The Deatbeats. There are so many amazing bands in the underground that never get the chance we are getting right now and I am very grateful for them for helping provide that.
So the tour with Uncle Acid is going awesome?
The tour is going great. People are feeling us and we are gaining a lot of fans on this run. I don’t think we could ask for much more than this. I remember when Bloodlust came out and I was totally into what Uncle Acid was doing. It’s not a dress up act for those guys and their music is perfect for when you want that vibe they put out there.
Have you been to Dayton before? What are you most looking forward to about being here?
We have not played Dayton before but I am excited to play with my old friends in Kenoma. Their old band Rune never got the respect they deserved and after listing to the new recording I am pleased to hear those guys are still making very listenable, intelligent heavy music.
What is next for your band?
After this tour we are getting back into writing the next album and so far I know we are going to tour Europe in April 2016.
(Visit Ecstatic Vision here: https://www.facebook.com/ecstaticvision.)