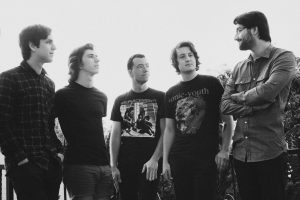 by Sean Bradley
Drawing on sounds from bands like Pg. 99, Converge and even The Replacements, Los Angeles quintet Touche Amore, who recently released a new Record Store Day-exclusive split with Kingston, PA’s Title Fight, never set out to sound like other bands.  They do their best to craft a unique sound, which has earned them a quickly multiply fanbase and increased attention across the indie and hardcore landscapes as of late.
“I’d like to think we’ve made a sound for ourselves,” vocalist Jeremy Bolm said via email. “We certainly gained the sound by influences, but I don’t think there are many bands that sound just like us.”
Known primarily for thier fast and loud approach, which is accented by Bolm’s throat-shredding, emotive vocals, captured the attention of bands like Circa Survive, with whom the band toured with last year.  Bolm said even though the band are known for a particular sound, they are never satisfied with writing and performing the same kind of music over and over.
“We never want to write the same record twice,” he said. “We’re always focusing on new and exciting ways to write parts.”
The band’s songwriting skills certainly grew while working with producer Ed Rose (The Appleseed Cast, The Get Up Kids) to record Parting the Sea Between Brightness and Me in Eudora, Kansas in 2011.
The evolution of their sound over time has come down to the people in the band too, he said. “We’ve evolved, literally, by having many different members or members moving to different instruments.  The lineup we are now that solidified before recording Parting the Sea (Between Brightness and Me) is the actual foundation of what we are.”
Although, Bolm typically avoids directly likening the band to their influences, he is forthcoming about one.  The Replacements, known for albums like Tim and Let It Be, are a seemingly unlikely, though significant influence on TA whether or not the rest of the band are aware of it, he said.
“I’m not sure I can directly put a finger on what influence they have had on our band, but I imagine subconsciously a lot of my favorite bands have influenced me in ways I might not realize,” he admitted. “I just happen to like their music a lot.”
As of late, Bolm said the band have their sights set on writing and recording a new album.  And he’s unwilling to rule out studio experimentation on their forthcoming album.  The band took similar chances on Parting the Sea’s “Condolences,” which features brooding piano chords as the sole accent to Bolm’s lamenting vocals.
Recording the new album relatively close to their California homes as opposed to the Midwestern plains of Kansas could help make experimenting with songwriting easier, he said.
“Being close to home provides the opportunity to pull resources a lot easier,” he said. “If we wanted horns or strings or something outside the box, we’ll have friends who can potentially come down to help out as oppose to being in the middle of nowhere (how we were in Eudora, Kansas last time) far from home.”
The band expects a fall release for their currently untitled new album.